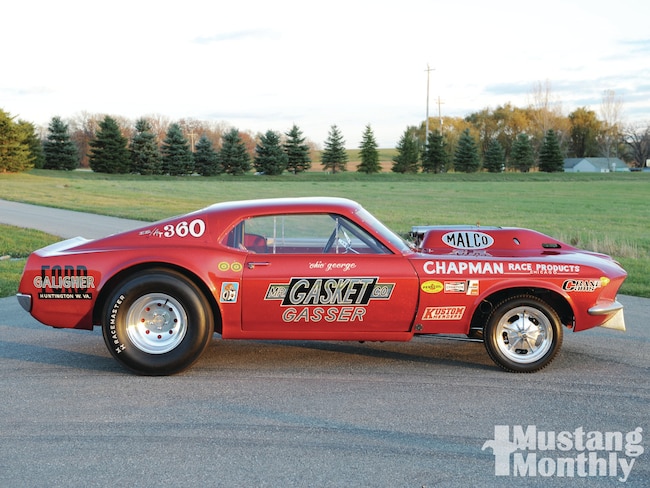 One of the most enigmatic Mustangs of all time was Ohio George Montgomery's "Mr. Gasket Gasser," which still survives today in the hands of restorer/collector Bob Perkins. Built in 1969 for Ford's drag racing program, the body is fiberglass and the frame is a modified '33 Willys. Straight axles were de rigueur on Gassers, bolstered with Logghe front coilover springs and a Ford 9-inch rear end.

"I could adjust the loading at all four corners," Montgomery tells us. "The chassis was way ahead of its time." Under the hood is a Boss 429 with twin turbochargers.

Montgomery revolutionized the NHRA's "Gasser" class in 1967 with his "Malco Gasser" '67 Mustang fastback. Previously, he had been winning with a supercharged '33 Willys coupe. Running elapsed times in the high 8-second range at about 160 mph, his record-setting Willys caught Ford's attention in the early 1960s.

Montgomery remembers getting a call around 1964: "Ford wanted me to do a 289 program but I wasn't interested in that. So I kind of let it go at that." Running supercharged Cadillac and Chevy small-blocks in his Willys, Montgomery was on top of the drag racing world. So he stayed with GM.

"Then I got beat at the 1965 Nationals," he explains. "That devastated me because I was used to winning. I had to make a change, so I called Ford back."

Once again, Ford asked Montgomery to run the 289. He was more interested in the 427 Cammer. Parts were scarce at that time, but to get Ohio George into the Ford camp, his contact, Charlie Gray, managed to round up some 427 Cammer pieces.

"Gray put me in the Lincoln-Mercury group," Montgomery adds. "At the time they also had Fast Eddie Schartman and Dyno Don Nicholson."

Montgomery began running and winning with the 427 Cammer in his Willys. But Ford wanted him in a Ford body, not a Willys.

"I went to one of the Ford racing banquets and Charlie Gray was bragging about the Willys whipping all the Gassers," Montgomery says. He recalls that one of the Ford executives was named "Frey," most likely Donald Frey, one of the product planners on the original Mustang.

"Frey wasn't impressed with the Willys because it wasn't a Ford body," Montgomery adds. “So Gray told me to build a '67 Mustang Gasser. I asked him how was I supposed to do that. He said, 'Just do it.'"

With advice from the NHRA, Montgomery lengthened the Willys frame to fit a '67 Mustang body. When he rolled the '67 Mustang—the world's first late-model Gasser—into tech at Bristol, Tennessee, for the Spring Nationals in 1967, the inspectors were confused.

Before then, Gassers had been 1930s to mid-1950s production cars, like Montgomery's previous '33 Willys coupe or other flying lunch boxes like the '55 Chevy. On these wild rides, Roots superchargers were common, along with mechanical fuel injection, straight front axle, fiberglass body panels, stripped interiors, and flamboyant paintjobs. Montgomery's Mustang broke with tradition but still fit the technical rules of the Gasser class. The tech inspectors eventually deemed the car legal. But with glassed-over headlights and grille with a slick body, the '67 Mustang held an aerodynamic advantage over Gassers based on antique car bodies.

For 1969, Ford asked Montgomery to update his '67 Mustang to the new Mach 1 body. In early 1968, Ford Special Vehicles loaned Montgomery one of the two available '69 Mach 1s to make a body mold. The job took three weeks. Montgomery remembers the Mach 1 came back with traces of fiberglass still on the corners of the expensive prototype body. (Current owner Perkins says the fiberglass body has Ford date codes and engineering numbers).

Initially, Boss 429 engine parts were not available, so at first Montgomery ran the proven 427 Cammer. However, Ford wanted a Boss 429 in the car because it was the latest big-block in the company arsenal. Like the 427 Cammer, Montgomery's Boss 429 was originally planned with a Roots 6-71 supercharger. 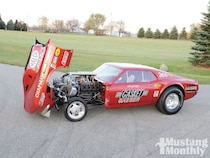 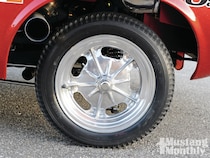 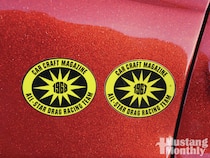 But Montgomery believed the Boss 429 had more potential than the Cammer. The Boss 429's bottom end was rugged because Ford engineered it for NASCAR. For reasons unknown, or perhaps just good luck, Ford assigned engineer Danny Jones to help Montgomery with his drag car. Jones had worked on Ford's Indy car program, specifically their world-beating four-cam V-8. Jones applied technology from the Indy car program to the Boss 429 for Montgomery's Gasser.

For the Boss 429 build, Jones suggested turbocharging, but not just one. He suggested two. However, there was more to the build than a pair of turbochargers.

Montgomery offers insight when he says, "We ended up making that engine think it was two four-cylinder Offys," referring to the famous Offenhauser four-cylinder Indy engine with double overhead cams.

Indy racers knew how to turbocharge a four-cylinder to the max. On the Boss 429, each turbocharger pumped four cylinders, but not one turbo for each half of the V-8. Instead, each turbo supplied two cylinders on each side, which explains the tubes crisscrossing into the intake manifold.

Unfortunately, before Montgomery could get the twin-turbo Boss 429 built, Ford canceled their racing budget and he lost Ford's financial backing. Still, he didn't quit. He learned that Danny Jones could still help "without causing waves."

Montgomery says, "Some of that stuff I had to pay for. But you can't say the engine was developed without total Ford blessing."

Montgomery was able to get the job done. His then-15-year-old son, Gregg, was helping him at this time. To this day, neither father nor son will divulge details about horsepower or technical specifications. The body was a one-off and so was the twin-turbo Boss 429. Perkins tells the story that Montgomery wouldn't open the hood in the pits because he didn't want anyone to see the engine.

Perkins also says the twin-turbo Boss 429 was rarely beat on the strip due to its incredible mid-range torque. At the end of the quarter-mile, the Boss "just kept pulling."

Gregg Montgomery was more specific in his assessment. He says, "That car was outrunning cars it shouldn't. Say we ran an AA-Altered and were slow off the line. We should not have been able to make up for the slow start on the other end. But we did."

Part of this enigma is wrapped up in the mystery of the turbochargers. A turbocharged big-block was way ahead of its time in 1971, not to mention a twin-turbo Boss 429 with exotic valvetrain and semi-hemispherical combustion chambers. Basically, the twin-turbo Boss 429 was superior, technologically speaking, compared to the other supercharged V-8s of that era. Where other Gassers could not catch up, the Boss 429 twin turbo could and did, time after time.

After winning the 1973 and 1974 Gatornationals, Montgomery retired the Mr. Gasket Gasser and built a turbocharged '74 Pinto. The Mustang was retired from drag racing in 1975 when Montgomery stored the car in "a little spot behind my office." Perkins lusted after the car for years, saying that George preserved the car in a Plexiglas cubicle. He sold the '33 Willy, now in the possession of the Henry Ford Museum, and the Malco Gasser '67 Mustang, on display in the Petersen Museum, but the '69 Boss was his favorite car. He says the '69 was never restored because "it never got dirty."

Montgomery retired from drag racing in 1985 at the age of 53 and still operates, with his son Gregg, George's Speed Shop in his hometown of Dayton, Ohio.