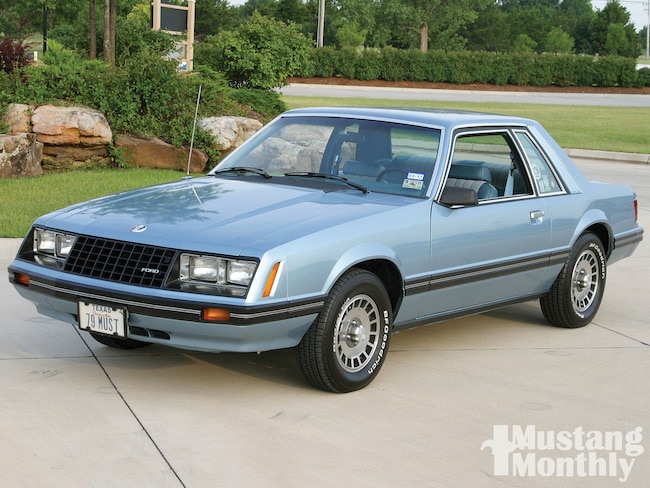 The mid-1970s were one of the most forgettable eras in automobile history. Performance didn't have a pulse. Styling was on the skids. Once good-looking automobiles were replaced by a new generation of lackluster aero-wedge doorstops. During that time, many of us turned our attention to the classic Mustangs of the 1960s and early 1970s. Instead of buying new Mustangs, we snapped up the old ones.

While some of us were reliving '65-'73 Mustangs, Bob Winland was purchasing this Medium Blue Glow '79 Mustang notchback. "I grew up in a small town in Ohio," Bob reflects. "I've always been a car guy, which is something I didn't get from my dad." Bob tells us his father never viewed automobiles as anything more than basic transportation.

"I remember the first Mustang on April 17, 1964," Bob tells us. By 1969, his favorite was the '69 Mach 1 in his local Ford dealer showroom. But by the time Bob was in a position to buy a Mustang, Washington and the insurance industry had robbed us of exciting automobiles like the Mach 1. By 1979, those powerful V-8s of 1969 had been replaced in Ford showrooms by more economical four- and six-cylinder Mustangs. Bob had to adjust his expectations.

The '79 Mustang was a complete redesign on a new platform called Fox. The all-new Jack Telnack design was more European, clearly a different Mustang yet ironically still identifiable as a Mustang. For many, it was a fresh and exciting approach to an American icon. The '79 Mustang was also a huge sales success with 332,024 units sold, ranking it number five in all-time Mustang sales behind 1966, 1965, 1967, and 1974. It was the last time Mustang sales topped 300,000.

By 1979, Bob was a college graduate with a steady income so his time to buy a new Mustang had come. Because Bob is an engineer, it was a largely analytical process for him. There was practical function to consider along with luxury, style, and budget.

Nothing on the Ford dealer lot interested him, inspiring Bob to order the Mustang he wanted. Cobra wasn't practical for Bob, nor was the Ghia. He wanted fuel economy in a time of rising gas prices, which ruled out the optional 302-2V V-8. The standard 2.3L inline four would never deliver enough power, yet the optional 2.3L four-cylinder turbo wasn't on his list of wants, nor was the Ford of Germany 2.8L V-6, leaving Bob in a quandary.

As fate or perhaps dumb luck would have it, Ford had a supply problem with the optional German V-6 engines. This is when Ford looked to the 200ci (3.3L) inline Falcon six, which was available in the new Fairmont and Zephyr. Because they were based on the Fox-body platform, putting an inline six in the Mustang was a no-brainer. This turn of events sold Bob on ordering a six-cylinder Mustang.

So how does a base '79 Mustang enter the ranks of survivors? In the six years following delivery, Bob drove this car 60,000 miles in Illinois' rough climate before moving to Louisiana where he was issued a company car. His Mustang went into a garage. Bob planned to store his Mustang temporarily as back-up transportation. Temporarily wound up being 14 years at a clip of about 1,000 miles per year.

Bob will tell you his car didn't get much maintenance, although it was protected inside dry storage. In 1999, Bob knew it was time to think about getting his Mustang back to showroom condition. By then, he had moved to Houston and had storage space. When Bob surveyed his Mustang's condition, he knew it needed bodywork and paint. He drove the Mustang to Paint N' Place in Sugarland, Texas, for cosmetic surgery and a fresh dressing of Medium Blue Glow acrylic enamel. The interior suffered only minor issues and never had to be touched, so it remains factory original in blue vinyl with simulated woodgrain.

Examining Bob's interior, elements jog our memories from the Mustang's redesign. For 1979 only, there were those down-low interior door handles that were hard to reach. There was also the turn signal lever that doubled as a horn button, which Ford kept in production until 1985. Mid-console was a cool LED message center that advised if an exterior bulb was out or there was low windshield washer fluid level. When it came to music, Bob ordered the optional AM/FM stereo with Premium Sound, which still works like a champ today. Bob comments he's on his fifth headliner-seems they fall like clockwork.

When we photographed Bob's Mustang in Oklahoma, the odometer read 86,999 miles. What surprised us was Bob's concours restored 200ci six, which hasn't been apart since it left the Dearborn Engine Plant in 1979. He figured out what he needed and ordered new-old-stock Motorcraft parts for the restoration.

"Since the car has been completed, it has been to the 40th Anniversary Show in Nashville and the 45th in Birmingham," Bob says. "About the only other four-eye Mustang you see out there is the Indy Pace Car or perhaps one of the '82-'85 GTs."

When we spotted Bob's concours restored, yet still original coupe, we felt great appreciation because he managed to save what most would never save, which makes him extraordinary indeed. Bob's story isn't about saving a rare automobile; it is about saving a once commonplace automobile that has become rare. 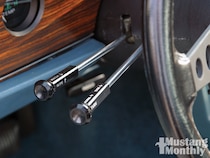 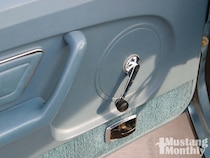