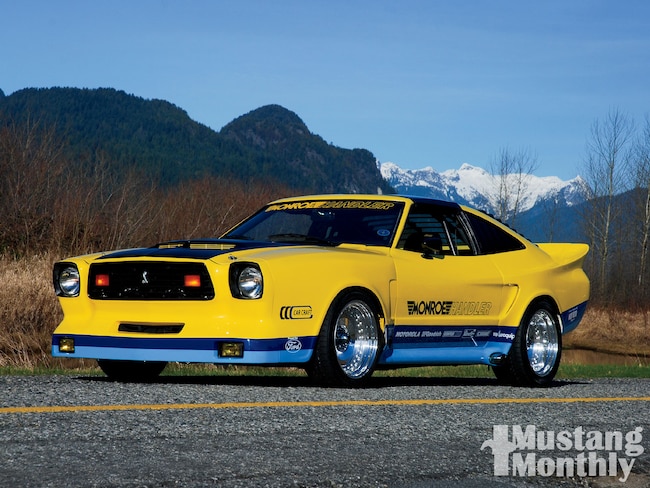 Tony Hall, from Port Coquitlam in Canada's British Columbia, has owned his share of cool rides, starting with a '65 Mustang as his first car. After a 20-year break from playing with cars, he ended up with a Mustang II Ghia, but quickly discovered that parts were scarce. A parts car was located, then another, and soon Tony had picked up a habit-buying discarded Mustang IIs to strip them of usable parts and make them available to other Mustang II owners.

Through his contacts on the Mustang II forums, Tony heard about a Monroe Handler Mustang II for sale. Not aware that such a car even existed, Tony researched the Monroe Handler and discovered that the first one had been built by Monroe Shocks and Hot Rod magazine in 1977. Starting out as a plain Mustang II, the original car had steel IMSA-style fenders by Creative Car Craft, Monroe suspension upgrades, and an engine reworked by Roush. The following year, Creative Car Craft was asked to create six more Monroe Handlers using fiberglass pieces. These six cars, plus one more built for a Southern politician (as the story goes), were not fitted with bumpers and were given away in a contest sponsored by Monroe, BF Goodrich, Centerline, Ford, Motorola, Revell, and Roush.

For Mustang II owners who wanted to build their own Monroe Handler, Creative Car Craft also sold the fiberglass pieces as a $1,250 kit, consisting of front and rear fenders, front air dam, rear spoiler, and rear air dam. As few as 30 kits were sold. Maier Racing produced similar kits, but the lighter weight made their panels more suitable for race cars than street cars. 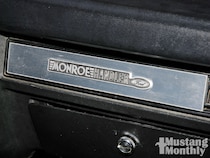 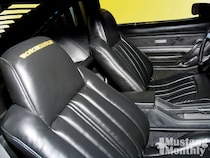 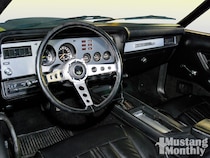 Intrigued, Tony contacted the Monroe Handler seller, learned that it was a '78 Rallye model equipped with one of the Creative Car Craft kits, and worked out a deal. But the car was far from perfect. It had been wrecked, then repaired with weird show-style modifications, including Lambo-style doors. At some point, it had fallen off a trailer, smashing the radiator support. The previous owner had developed a sequential taillight system and was looking to make the Monroe Handler a rolling sample of his work until the economy shifted and that business got shelved. Basically, Tony's purchase had a long way to go before becoming a Monroe Handler again.

Tony went to work to restore his Monroe Handler. He ripped out the awful yellow and red leather upholstery so it could be replaced with a more original deluxe black interior. The rear seat was removed, and a rollbar and racing fuel cell were installed to mimic the original Monroe Handler. Thanks to Shawn Mann's collection of Monroe Handler photos, Tony was able to recreate the paint scheme while Axe Graphics helped him create the needed decals. Two paint schemes were used on the Monroe Handlers; this one matches the seven promotional cars built by Creative Car Craft. 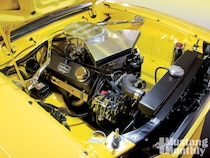 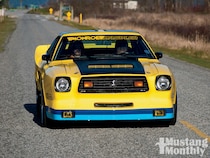 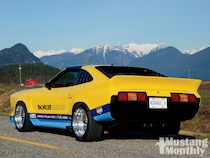 Not looking to build a purist car, Tony installed larger 17-inch Centerline wheels, a custom air cleaner, and a hoodscoop from a '72 Gran Torino. Heidts upper and lower tubular control arms were installed in the front, and the back end got lowering blocks and Monroe shocks. Tony also installed rear window louvers, although this car did not originally come with them.

Tony also took care of the small details, like recreating the Monroe Handler dash and door panel plaques. It's the little things that have helped put this Monroe Handler tribute back in the limelight.

Hot Rod Handler
In 1977, the "IMSA look" was the going thing. So when Monroe decided to build a Mustang II to promote its Handler line of shocks, they went for the wider fenders and tires as used on the sports cars in the International Motor Sports Association race series. The Monroe Handler appeared on the cover of the June 1977 Hot Rod, which also included part one of the car's buildup. There were a total of three articles in the series, with two more in the July and August issues.

The styling of the original Monroe Handler came from a contest-winning sketch and was combined with creative additions by well-known designers like Harry Bradley, Tod Gerstenburger, and Harry Weeks. Creative Car Kraft's Dave Kent created the body kit out of steel while Jack Roush built a 363ci small-block that produced 400 hp. Harris Dynamics modified the suspension, using Monroe Handler shocks, of course.

Upon completion of the project, Monroe liked it so much that the company commissioned Kent to build six more, this time with fiberglass, for promotional purposes. On his own, Kent sold complete Monroe Handler body kits.