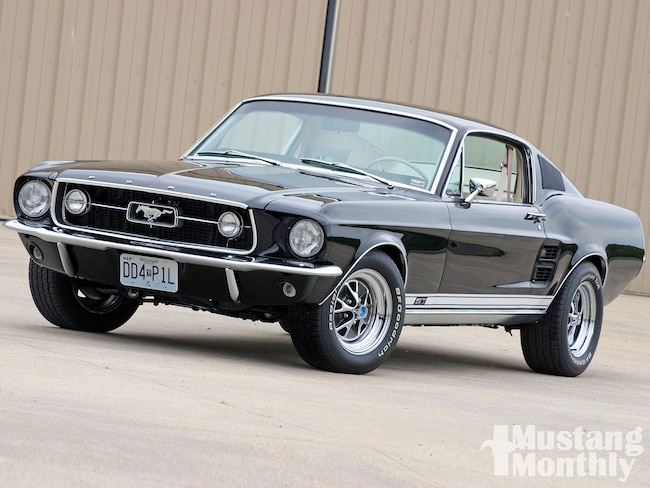 Lonny Childress pulled over, set the parking brake, and announced, "Now you drive."

I was visiting Gateway Classic Mustang to check out their new vintage Mustang suspension system (see "Gateway to Modern Handling" in the August 2010 issue) and got more than I bargained for when Lonny and his brother, Jason, pointed out Ed Schmidt's '67 GT fastback on a corner lift. Gateway had recently completed the restoration of Ed's original-owner Mustang, complete with the installation of Gateway's new suspension, so the car offered a perfect opportunity for a test on the streets around the Gateway shop.

Interestingly, Ed's fastback doesn't look like the high-profile restomods that have come out of Gateway in recent years, cars like Sammy Hagar's "Red Rocker" and an updated version of the '68 Bullitt Mustang for Steve McQueen's son, Chad. No, the black GT with parchment interior appears totally stock, which is just the way Ed wanted it-both in 1967 and for the Gateway restoration.

"It was my first new car after graduating from college in 1967," Ed told us, noting that he purchased the fastback from Diehl Montgomery Ford in Rolla, Missouri. "I worked a couple of months as an engineer and saved enough money to buy the Mustang before going to into the service. My dad kept it for me while I was in Vietnam."

After completing his military duties, Ed returned home to his Mustang, driving it until 1978 when, instead of selling it, he put the fastback in storage. Over the past few years, Ed admits "getting old and sentimental" about his Mustang. That's when he ran into Dale Childress, co-owner of Gateway and father to Lonny and Jason, at a restaurant.

"We started talking," Ed recalls. "He learned that I owned a '67 GT fastback in need of work and I learned that Dale was involved in a Mustang restoration business. The car didn't track well on the highway, so they came to pick it up."

Initially, Ed wanted to improve his Mustang's handling and drivability with Gateway's front suspension and rack-and-pinion. But, as these things typically go, one thing led to another, as Ed explains, "I decided to add air conditioning because I want to drive it, and I always wanted a Hi-Po instead of the original 289 two-barrel, so before I knew it I was involved in a full restoration with a nod toward modern modifications to make the car more fun to drive."

With the body ravaged by over four decades worth of midwestern winters and subsequent storage, the Gateway gang completely disassembled the fastback in preparation for extensive sheetmetal replacement and fresh Raven Black paint. From there, the Mustang was built with one eye on original appearance and the other on modern improvements. "I wanted it to drive like a modern car but look like an original," Ed says.

To meet that goal, Gateway installed their Gateway Performance Suspension coilover front suspension with rack-and-pinion steering and 11-inch disc brakes. The rear suspension remains factory with leaf springs and drum brakes, although Gateway upgraded the rear end to a 9-inch from The Nine-Inch Factory. Tires are modern BFGoodrich T/A radials mounted on reproduction '67 Styled Steel wheels instead of the original steel wheels with hub caps.

For the rebuild of the 289, Rolla Competition Engines in Rolla, Missouri started with the original block and added Edelbrock aluminum heads and intake, Holley 600-cfm carb, and a Comp Cams' hydraulic camshaft. Exhaust manifolds for the 289 High Performance maintain the factory appearance but flow better than the stock manifolds. To get the Hi-Po look that Ed always wanted, the small-block is dressed out with chrome valve covers and open-element air cleaner. A Sanden A/C compressor provides the efficiency of modern refrigerant for the Classic Auto Air Perfect Fit air-conditioning.

The engine dyno'ed at over 300 horsepower, which reaches the 3.50 gears through a Tremec TKO five-speed.

On my short drive with Lonny Childress, I discovered that Ed's fastback is delightful on the street. The Gateway rack-and-pinion steering is quick and precise, and the ride beats any vintage Mustang with original-style A-arms. Although I refrained from throwing someone else's Mustang into hard cornering situations, I was able to determine that Ed's GT is fully capable of taking on more than average street driving. In fact, Ed drove his Mustang on the track at the Hallett Motor Racing Circuit during the Mid America Ford and Team Shelby Nationals, where his instructor was surprised by the handling of an "old" Mustang.

After over 40 years of ownership, Ed is thrilled with his renewed relationship with his renewed Mustang. "I guess now I can say it's a 'clean one-owner' car," Ed laughs. "I never expected to keep it 10 years, much less 40!"