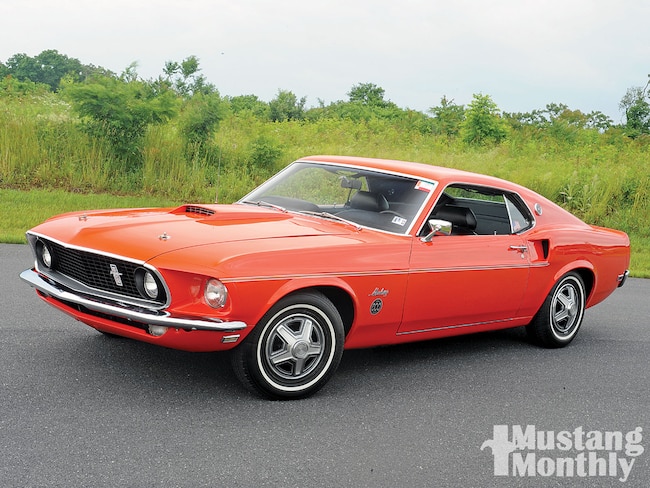 There was no way to miss Don Hughmanick's brightly colored '69 Mustang SportsRoof at the 2010 Carlisle Ford Nationals in Pennsylvania. When I stopped for a closer look, Don explained that it's a Limited Edition 600, with the 600 representing the sales goal for the Philadelphia district as part of a national Mustang Stampede promotion. The color is a special Flower Power Red, one of two available colors for the Limited Edition 600 Mustangs. Groovy Green was the other period-named shade. Around the perimeter of the unique 600 fender decal is an image of a rope in a western motif.

Offered as both SportsRoof and hardtop, each Limited Edition 600 came with unique reflective side stripes, full wheel covers, whitewall tires, hoodscoop, chrome remote side mirrors, AM radio, and the special fender emblems. The 200-1V six-cylinder was the standard engine, with the 250-1V six and the 302-2V as options. Don says the 600 series was "all show and no go."

However, Don has discovered that Ford built one Mach 1 (351-2V) in the 600 series. Don would love to find this car, as he has become the leading authority on the Limited Edition 600.

Don's fascination started shortly after he bought his SportsRoof in 1981. As a 16-year-old looking for his first car, he paid $700 for the Mustang that had been repainted in dark green. He soon noticed that the trunk and underhood area was orange, apparently the original color. The paint code on the trim tag was blank, denoting a special order color, and he could vaguely make out round decals under the front fender paint. He "got courageous" with paint reducer and carefully rubbed off the paint to uncover the Limited Edition 600 decals.

In 1982, Don wrote to Ford asking about the decal. Someone remembered the promotion and wrote back with details. As the years passed, Don repainted his SportsRoof in its original orange hue and performed additional research, eventually discovering old newspaper ads with details about the 600 series Mustangs for the 1969 Mustang Stampede sales promotion. He now has a website at www.limited600mustang.net that is an "accumulation of about 22 years of information gathering and interviews."

According to Don's research, Ford organized a special Drive-Away promotion for the Limited Edition 600, with Bob Morgan of Morgan Ford (now Medford Ford) in Medford, New Jersey, in charge. Morgan's dealership prepped around 180 of the cars and delivered them to the Flying W Airport & Dude Ranch in Medford, where dealers enjoyed food and festivities before driving their Metuchen-built Limited Edition 600 Mustangs back to their dealerships. One of those dealers, Francis Ford in Harrisburg, Pennsylvania, sold Don's car new, along with four other Limited Edition 600s.

Production of the Limited Edition 600 totaled 503, 97 less than the sales goal. The majority were painted Flower Power Red; only 15-20 percent were Groovy Green. Flower Power Red would become Calypso Coral in 1970; Groovy Green made a return in 1971 as Bright Lime.

Don began restoring his fastback in 1990. After the teardown, his wife had their first child, so the restoration wasn't completed until 1999. A graphic artist by trade, Don had no problem reproducing the Limited Series 600 front fender decals. He has been "improving" the car ever since, including the addition of Ford accessory air conditioning. The hoodpins are not part of the Limited Edition 600 package; Don says they are part of his "personal history" with the car, added after a high school mishap.

How to Identify a Limited Edition 600 Mustang

Bandido Connection?
The air inflation decal on the inside of late-'69 Mustang drivers' doors lists a Bandido model. Did Ford plan a special edition Bandido as a springtime model? And is there a connection to the Limited Edition 600?

Hopefully, Ford will one day reveal information about the Bandido Mustang. Perhaps the material is sensitive due to its politically incorrect stance. The "Frito Bandido" was Frito's cartoon mascot, with voice by Mel Blanc, from 1967 to 1971, with the Bandido stealing Frito corn chips to create the stereotype of the Mexican bandit in western movies. The Bandido would have fit Ford's western advertising campaign with the '69 1/2 Mustang Stampede. We've also heard that Frito gave away a Frito Bandido '69 Mustang in a sales promotion.

Ford eventually killed the Bandido Mustang idea, but not before the name appeared on the tire specification labels in the last half of the 1969 model year.

Don has visited with the owner of a Groovy Green '69 Limited Edition 600 hardtop. When the local Ford dealer repainted his car, the paint they used was called "Bandido Green." Is this another bit of evidence linking the '69 1/2 Mustang Stampede springtime special editions to the Bandido? 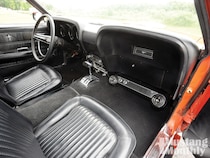 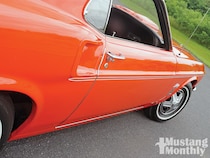 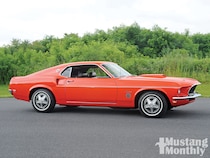