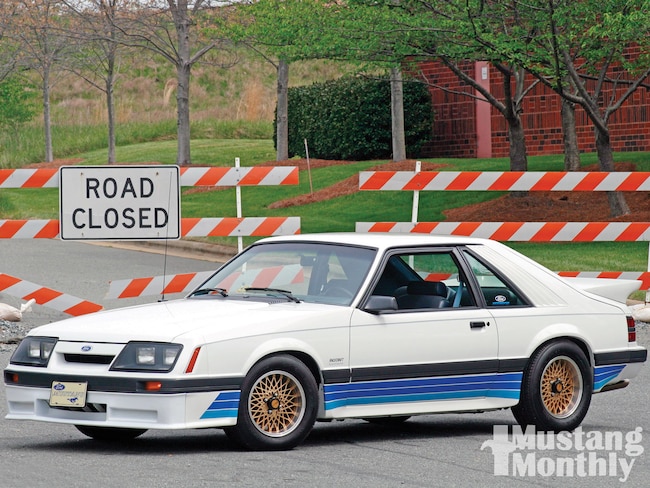 Steve Saleen was ready to set the world on fire in the summer of 1984. He had just sold three of his new high-performance Mustang conversions and was certain he had only scratched the surface of the premium-pony market. Minor changes to the '85 Mustang's appearance and further evolution of the 5.0-liter gave the California-based modifier a double advantage in that the '84 components he had developed could still be used and his cars would be even faster with the improved V-8.

Still wearing the '84 model's 600-cfm Holley four-barrel carburetor and dual-plane aluminum intake manifold, the 5.0-liter gained 35 hp for '85 when Ford added a hydraulic roller cam and lifters, forged aluminum pistons, steel-tube exhaust manifolds, and a partial dual-exhaust system consisting of a single catalytic converter feeding a pipe that split into two mufflers. The 210hp 302 was available only with the Borg-Warner T-5 five-speed transmission and 2.73:1 Traction-Lok rear axle (3.08:1 optional) in a 7.5-inch housing. Choosing an automatic created a substantial power loss; running on central fuel injection (CFI), that version of the V-8 started out at 165 hp but increased midyear to 180 with a less-restrictive air cleaner, partial dual-exhaust system, and a nominal increase in compression.

Although Steve Saleen only produced three Saleen Mustangs for '84, he was optimistic that his small company could sell a couple of hundred in 1985. The economy was strong, especially in his home state, where national defense spending under U.S. president and former California governor Ronald Reagan brought big bucks to aircraft, computer, and weapons manufacturers. Also, American automakers were stressing performance, even in their most mundane models. Young car enthusiasts, long ignored by the marketplace, were being "discovered" and catered to by corporate demographers. Until the manufacturers fully met their needs, some drivers would willingly spend a little more to buy from the niche car builders.

The anticipated production schedule would overwhelm the small Racecraft facility in Petaluma that Saleen had used to build the '84s, so when Brodie's Tire & Brake asked why he needed them to mount and balance so many fancy Hayashi wheels, Saleen saw an opportunity. He convinced Brodie to reserve two hydraulic lifts and some mechanics for the production of Saleen Mustangs. Sixteen Mustangs were converted during the next eight weeks, and the first sales literature began making its way to Ford dealerships around the country.

Colors included Oxford White, Black, Canyon Red, and Medium Regatta Blue. Any request for a non-Saleen color added an additional $150 to the $4,195 package, and a conversion from a GT model cost $100 extra. Automatic transmissions created no problems for the Saleen production system, so there was no fee for that option-its availability just wasn't advertised.

On the occasion someone insisted on retaining cruise control, the Wolf four-spoke steering wheel would be shipped to the new owner uninstalled in the car.

Sanyo and Kenwood stereo cassette systems were offered throughout '85 as options, but the Sanyo radios were phased out early in the year. The original '84 package was applied to the '85 cars built in Brodie's work bays with only a few exceptions.

The suspension, bodywork, and interior enhancements were carryovers from '84, except for a late change involving the vendor for the air dam and other aerodynamic pieces. In November, toward the end of Saleen's time at the Brodie shop, he replaced the three-piece fiberglass air dam from Spoilers Plus with a three-piece urethane part from A&A Specialties and went from the '84 "big wing" spoiler to a slightly smaller model.

Production went smoothly at Brodie's, but too slowly for Saleen's aspirations. Even as the first '85s were being shipped to dealers, he was working out details for a move to southern California. He decided to relocate his operation to the Burch Ford dealership in La Habra, a larger facility closer to his parts suppliers.

The new production facility at Burch Ford was actually the dealership's paint and body shop, located a block away from the main lot. Three stalls were dedicated to Saleen's enterprise, and there was ample room outside for a fenced-in area to house LXs and occasional GTs as they awaited conversion.

With production capacity problems solved, Saleen's next step was to hit the road to make sales calls at Ford dealerships around the country. Creativity being one of his strong suits, Saleen came up with a unique way to keep travel costs low-he signed on with Bob Bondurant to work on Ford's dealer training program for its new Merkur line. In early 1985, Ford was making every effort to support the 800 dealers who had signed on to sell its imported Merkur franchise. Saleen's role was to fly to different locations around the country, where he would spend the morning showing the Merkur to potential buyers and dealers. Once his obligations were met for the day, he spent the rest of the afternoon visiting Ford dealers and district offices to pitch his Saleen Mustang.

Although Saleen never visited Skyline Ford in Floyd, Virginia, during his Merkur training, a letter he sent to George Spangler's father resulted in the sale of 85-0053, a white five-speed hatchback with blue stripes and gold 15x7-inch Hayashi rims. George, who was working in his father's service department when the Saleen arrived in March 1985, immediately claimed the Mustang as his own. He was so happy with the Saleen package that Skyline would certainly have ordered a few more had the dealership not caught fire a few weeks later. The good news is that a mechanic drove the Saleen to safety, even as smoke poured out of the dealership garage.

Perhaps overly cautious about his car's safety, George parked the Saleen with his '65 Mustang convertible, '69-'70 Mach 1s, and Torino Talladega while he worked off his driving energy on the local racing scene.

"I thought it would someday be like a Shelby," Spangler said. "As it got older, I really wanted to keep the miles low. I've only driven it 2,900 miles so far."

Spangler has retained every scrap of paper pertaining to 85-0053, including Saleen's original sales pitches, which he keeps in a thick binder that once was a '97 Lincoln-Mercury Product Portfolio. There are even photographs of the Saleen sitting in the dealership parking lot while the building burns down less than 50 feet away.

In spite of the car's unusual history and extremely low mileage, Spangler does not show it off very often, preferring to enjoy it in his own garage. Rare exceptions have included a visit to the 35th Anniversary Mustang Celebration at Charlotte Motor Speedway and the 40th Anniversary Mustang Show at Nashville Superspeedway.