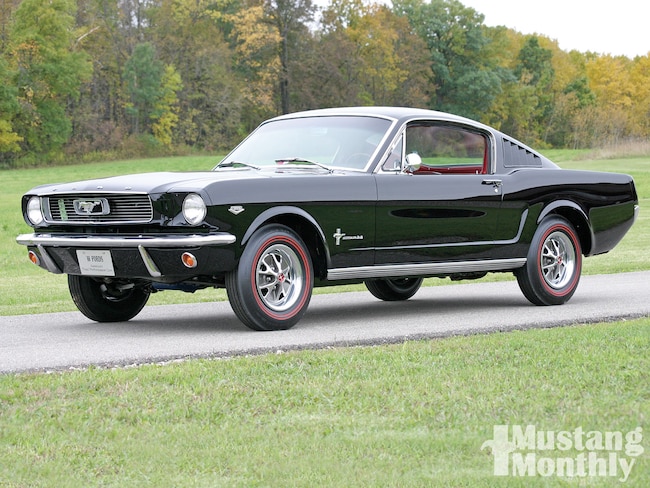 Bob Perkins remembers meeting Ed McMullen at the Mustang Club of America Grand Nationals in Kingsport, Tennessee, in 1981. "His nickname was Ed Glass because he had a glass company," Bob recalls. "On the side, he specialized in NOS Ford parts, mainly '55-'56 Fords, but he also had a lot of Rotunda stuff like oil filters. He also told me that he owned a low-mileage '66 Mustang fastback with the K-code 289 High Performance engine."

Ed told Bob that the Mustang had originally been purchased by a gentleman who owned a service station with his brother in Cleveland. In 1966, the two brothers had purchased a pair of '66 Mustang fastbacks, one black with red interior and the other red with black interior. The cars were seldom driven, usually just on weekends. Ed eventually bought the black one, with less than 4,000 miles on the odometer, in 1969 or 1970.

Always intrigued by low-mileage Mustangs, Bob inquired about buying the K-code fastback but Ed said he wanted to save it for his three sons. However, a few years later at Spring Carlisle, Ed told Bob that he was ready to sell the fastback. "He said he couldn't split the car into thirds for his sons," Bob says, "and he had decided that he wanted to buy some land."

Bob followed Ed home to Ohio and made the deal for the 3,800-mile K-code fastback. "I got the car and a bunch of parts," Bob explains. "Ed had been buying Ford parts since 1966, so he had a lot, including OEM mufflers, Redline tires, and Boss 429 parts. There was so much that I had to make another trip to Ohio to get it all."

That was in 1985 or 1986, Bob recalls, and the black fastback has been a treasured part of his low-mileage Mustang collection ever since. However, unlike some of Bob's other Mustangs, this one needed some attention. For example, the original owner had lettered the rear quarter-panels with "Quarter Horse" in golf leaf paint, so Bob ended up repainting the sides of the fastback. The hood, roof, and trunk panel paint remains original. The 289 High-Performance engine also required cleaning and detailing.

Bob notes that the original owner had protected the undercarraige with Rust-Oleum. "He applied it with a paint brush, probably while the car was on a lift at his service station," Bob says. "Thankfully, Rust-Oleum is a single-stage paint with no hardener, so it comes off easily. Because it was protected, the underside is really nice."

In addition to its low mileage, the K-code fastback also has some unique equipment-or lack of it. The original owner ordered the car with both radio and heater delete, something rarely done in a cold weather state like Ohio. "In addition to co-owning the service station with his brother, he also worked at Ford's Cleveland Engine Plant," Bob notes. "So he must have known someone who helped him order the heater delete. He just wanted hot-rod. It wasn't his everyday car."

More evidence of the hot-rod intentions is the Detroit Locker "NoSpin" rear differential. Bob thinks it was purchased from the Shelby American parts catalog and, like the Rust-Oleum, installed at the service station. The original owner also kept the Detroit Locker instructions and applied the warning sticker, like the ones found on Shelby GT350s, to the heater delete panel.

The owner also protected the red standard interior. "I found newspaper, dated 1968, covering the rear floorboards and the trunk mat," Bob says. "The interior is immaculate. It's got that original pearlescent sheen that you don't see in reproduction upholstery."

The trim ring has never been installed on the spare tire's Styled Steel wheel, Bob points out. In fact, the car came with the original trim ring box, with a penciled in date, and "2nd shift" notation, and indiscernible signature of the assembly plant worker who placed it in the trunk. "The Styled Steel trim rings weren't installed at the factory because they could have been damaged or stolen in transit," Bob says. "So they were shipped to the dealers, five to a box, in the trunk for installation during dealer prep."

Editor's note: This is the fourth in a series of photo profiles of low-mileage Mustangs owned by restorer and collector Bob Perkins in Juneau, Wisconsin. Previous issues have featured Bob's 52-mile '69 Mach 1, 56-mile '66 hardtop, and 16,000-mile '70 Boss 302. Because these cars provide restorers with a snap-shot of how Mustangs were originally built and delivered to dealers, we're including more than the usual amount of detail images. Next month: 13,000-mile '69 Boss 302. 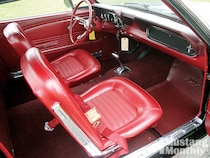 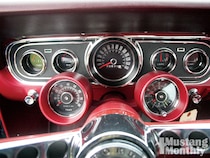 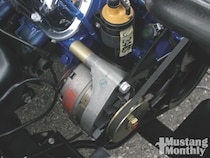 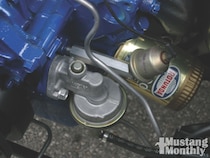 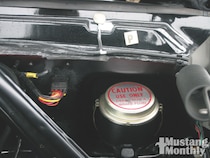 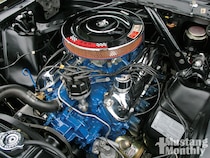 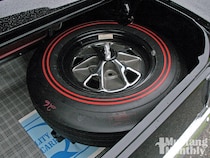