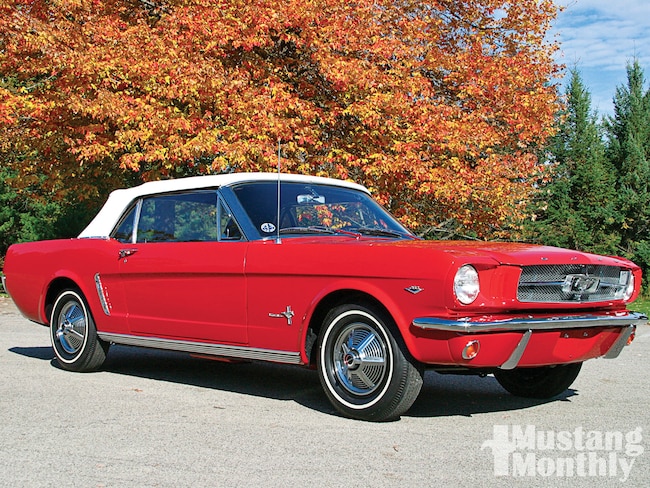 WE ADMIT we were skeptical. An email arrived from Bruce Beeghly with an interesting find, 5F08F100140, one of approximately 150-180 pre-production '64 1/2 Mustang units with the "05C" (March 5, 1964) date code. He and restorer Nate Miller were making claims about the car that just didn't ring true because we'd never seen anything like it. So we went to Youngstown, Ohio, for a closer look.

Bruce purchased 100140 from Fraser Dante of Atlanta in December of 2006. We had heard from Fraser earlier, so we knew it was a low serial number car with DSO code 89 for Transportation Services, built and kept for Ford's own use, as were many of the pre-production cars. Some were show or display cars, while others went to racing organizations like Holman & Moody and Alan Mann Racing in England. A few went on dealer showroom tours.

There's more unknown about these pre-production cars than there is known. No two are exactly the same because these were the first production units to roll down the Dearborn assembly plant during those first cold days of 1964. Some were perfect specimens while others were hodge-podge, hand-assembled units. As Bruce and restorer Nate Miller began disassembling this Rangoon Red convertible, they learned quickly just how sloppy things were in the early going.

"Some months after I bought the car, I noticed an article in our local newspaper about the Miller family in Youngstown," Bruce reflects. "Kathy Miller still owned the '64 1/2 Mustang given to her as a high school graduation present. The car had won several national show awards in the wake of a restoration by her son, Nate, who, along with his father, John Miller, performed restorations at Buckeye Muscle Car Restorations in Youngstown."

Bruce knew his Mustang needed a full-scale restoration in order to be taken seriously and have the respect of show judges and enthusiasts alike. He and the Millers went to work disassembling the car, documenting and taking pictures as they went. This would not be a simple restoration because 100140 was not your run-of-the-mill '64 1/2 convertible. It was as unique as a human fingerprint with many production variances when compared to normal production Mustangs (see "Production Oddities" sidebar).

When Bruce and Nate discovered the early production variances, they drew on all available information from known pre-production units with "05C" date codes. They located other pre-production Mustangs (100001, 100002, 100093, 100129, 100145, 100155, and 100173) and, when possible, they inspected them to gather information. They were permitted access to 5F08F100001 at the Henry Ford Museum in Dearborn, where they spent hours going over the car that Ford recognizes as Mustang #1. They exchanged photos and information with Bob Fria, who owns 5F07U100002, recognized as the first production Mustang hardtop. They contacted other owners of pre-production cars and asked for photos. They were able to answer many previously unanswered questions about pre-production units. At the same time, they came up with a battery of new questions that may never be answered.

When they compiled radiator support information, they discovered a pattern that appears to establish how pre-production units were positioned on the Dearborn assembly line. It is a pattern of job numbers, known as "rotation" numbers with mass production units. Rotation numbers are assembly plant locators used by plant personnel to find units on the line. In mass production, there are two rotation numbers-one for the body shop and another for the trim and chassis line. Rarely are they the same. On 100140, the body shop rotation number is stamped into the metal body buck tag. It's also etched into the radiator support with an acid etch marker as an alternate means of identification.

The body shop was where stamped Mustang body parts were welded together on assembly skids to become fully bucked and painted bodies ready for assembly on the trim and chassis line. Mustangs got their identity (vehicle identification and rotation number) in the body shop via body buck tags and inner fenders when welding and leading in processes were complete.

Once the painted body was ready for assembly at trim and chassis, it was assigned a broadcast sheet, which served as a guide for assembly workers to follow along the way. Based on current research by Bob Fria, Nate Miller, and Bruce Beeghly, markings on pre-production radiator supports determined where these cars were positioned on the Dearborn line. Fria has also determined build phases via alphanumeric codes written on the radiator support.

Although 100001 is the first Mustang ordered, it appears it was bucked and assembled later than 100140 based on both rotation number and physical improvements in assembly quality. According to Bruce, discussions with a former Ford engineer have shown the rotation number theory to be valid. For example, 100001 has rotation number 84 where 100140 has 41, which places it ahead of 100001 on the line, making it the earliest known pre-production car until someone comes up with a lower rotation number. Because rotation numbers have been removed from some restored pre-production cars, that information may be lost forever.

Although all pre-production cars have a date code of "05C," it is purely an arbitrary date code designed to "flag" these units both in administrative paperwork and in production. They were actually produced earlier, between February and March. According to the Ford employee newsletter Ford World from February of 1964, some 150 pre-production units had already been assembled at Dearborn as show and promotional cars prior to the planned March 9 Job 1 date.

"A progression from crude to mass production can be seen in the areas mentioned in the sidebar list," Bruce comments. "Things like sheetmetal cuts, rear wheelhouse modifications, dimensions, colors, markings, and the like demonstrate that 100140 is distinctly more crude in its assembly than 100001 and other lower VIN units, which means 100140 was at the beginning of the Mustang's assembly engineering curve." It is also believed by Bob Fria, as well as Bruce and Nate, that pre-production units were pilot plant bodies transferred to Dearborn assembly and serialized as Dearborn units. "Our work leads us to these conclusions," Bruce adds. "Pre-production cars were hand-assembled over a period of months prior to the March 9 start-up date, which also means these cars did not come off the assembly line in consecutive unit number sequence."

Although Bruce understood he was buying a pre-production car when cash and title exchanged hands, he could not have known what he was about to learn about these cars in the process. Because the car was so unique in terms of dimensions and parts, he discovered that reproduction and even new-old-stock parts would not fit, which meant he and Nate were faced with decisions about how to make "new" components for which nothing matched. This tested Nate's restoration skills like never before. Where sheetmetal had to be repaired or replaced, Nate had to venture into specialized fabrication to get it right. In his restoration efforts, Nate learned much about 100140's unique body. When Nate measured the body dimensions, he learned just how "handbuilt" 100140 was. Slightly shorter and wider than regular production cars, it was unlike any '64 1/2 Mustang he'd ever seen.

What also fascinated Nate was the 260-2V V-8 engine, which was clad in silver with Ford's robin's egg blue air cleaner and valve covers-as unlike regular production small-blocks as the car was unlike mass production Mustangs. Although it would be easy to assume someone rebuilt the engine and painted it silver, this was not the case. It was clearly an unmolested 260 V-8 in factory paint. Pilot cars and pre-production units often received non-production engines with engineering identification numbers. Bruce theorizes these engines were painted silver to make it easier to identify problems, such as oil leaks. We're convinced silver also made these engines stand out for easy identification, differentiating them from regular production engines, which were black.

Because this Mustang is significant to production history, Bruce and Nate understood how important authenticity was. They spared no details. Using a modern day basecoat/clearcoat urethane paint process was out of the question. It had to be a single-stage finish that would remain true to the car's factory demeanor. Nate worked closely with Sherwin Williams to develop an old-school finish for this restoration project. The result was U-2127 Ultra One, a single-stage urethane that is now available to all restorers. As you can see, the result is stunning. Also stunning is the show car leaded seams around doors and trunk opening.

Although 100140 has been billed as a "prototype" on at least one website, it is actually a pre-production unit from the beginning of mass production, where what was learned at the pilot plant was applied at the assembly plant on first units. What ties these pre-production cars together is crude sheetmetal alterations, pilot stampings not used in mass production, items like shifter handles and door lock buttons that would later be changed, leaded seams on show cars with Ford DSO codes, and the tell-tale "05C" date code.

Think of pre-production cars as pump primers-units that enabled body engineering to refine fit and assembly technique along with getting assembly workers up to speed on the new Mustang. Thanks to the research and restoration of 100140, Bruce and Nate are up to speed on this genuine slice of Mustang history.