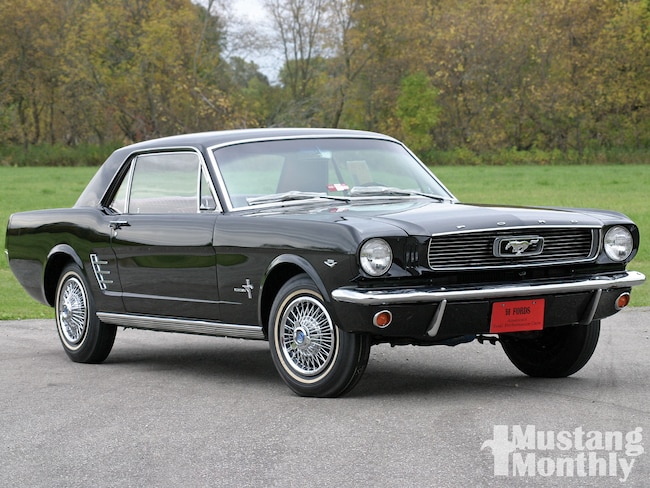 Editor's Note: This is the second in a series of photo profiles of low-mileage Mustangs owned by restorer and collector Bob Perkins in Juneau, Wisconsin. Last month, we showcased Bob's 52-mile '69 Mach 1. For concours restorers, these cars are snap-shots of how vintage Mustangs were built, which is why we're including more than the usual amount of detail images. Next month: a 16,000-mile '70 Boss 302.

It's always amazing to find a vintage Mustang with ultra low-mileage. In the case of this '66 hardtop, on average, the 44-year-old Mustang has been driven barely over one mile per year. Like last month's '69 Mach 1 with 52 miles, this hardtop came from the Bob Mercer collection.

Mercer, who owned Bob Mercer Ford Sales in Hickman, Nebraska, from 1962 to 1970, set aside one new Ford per year during his nine years of ownership. When he was diagnosed with cancer in the late 1990s, he broke up the collection, selling the cars to different buyers. Two of the three Mustangs, including this '66 hardtop, are now part of Bob Perkins' collection of low-mileage Mustangs.

"Mercer did an amazing job of preserving the cars," Perkins says. "They never went through dealer prep, so they were just like they came off the hauler. And he kept everything-tags, stickers, plastic covers, paperwork, etc. He even kept the IBM data card that was used to place the order to the Ford district sales office."

Like the majority of the cars in the Mercer collection, the '66 hardtop is black with red interior. "Always a great combination," Perkins points out. Better yet, the interior is the optional Interior Décor Group "Pony" version, one of only a few options on the car. Other options are the 289 two-barrel engine, AM radio, tinted windshield, and whitewall tires. The window sticker, still in the driver-side window, shows a $2,804.55 suggested retail price.

Perkins notes that the Deluxe wire wheel covers are not listed on the window sticker, so he assumes Mercer swapped out the original standard wheel covers with wire versions from another car. When Perkins first saw this Mustang during a visit with Mercer in 1987, the wire wheel covers were still in their original box in the trunk. However, the collector who owned the car between Mercer and Perkins installed the wheel covers and threw away the box, which makes Perkins cringe.

"The wheel covers and antenna came in the trunk so nothing would happen to them during transit," Perkins points out. "They were installed during dealer prep. So when someone installed the wheel covers, marring the paint on the steel wheels in the process, it took away from the just-off-the-line appearance."

Perkins also notes that the undercarriage on this car never received primer or undercoating. "My guess is that they ran out of primer on the assembly line," he says, "and it wasn't worth holding up the line to wait on more." As a result, floorpan welds and even markings, like logos for the steel plant, are visible.

Perkins points out that the 289 has '67-style valve covers, not necessarily out of the ordinary because the Mustang was built late in production on June 9, 1966. Blue overspray is still on the exhaust manifolds. The interior remains "crisp," as Perkins describes it, and the red upholstery retains its original pearly iridescent look. The Autolite Sta-Ful battery, although non-working, is the original Group 22 with raised lettering. 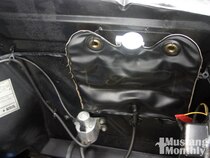 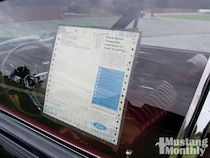 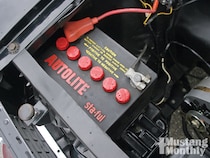 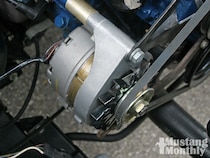 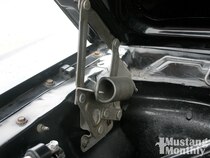 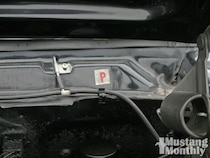 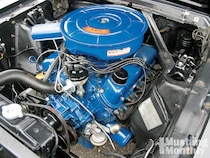 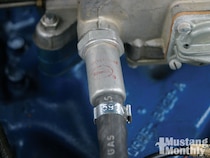 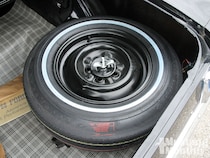 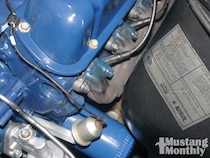 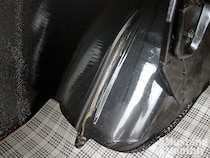 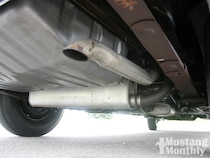