Ford Salesman And '03 Mach 1 Owner Jon Schultz Began Dating His Future Wife When He Sold Her An '04 Mach 1. Now They're A Two Mach Family. 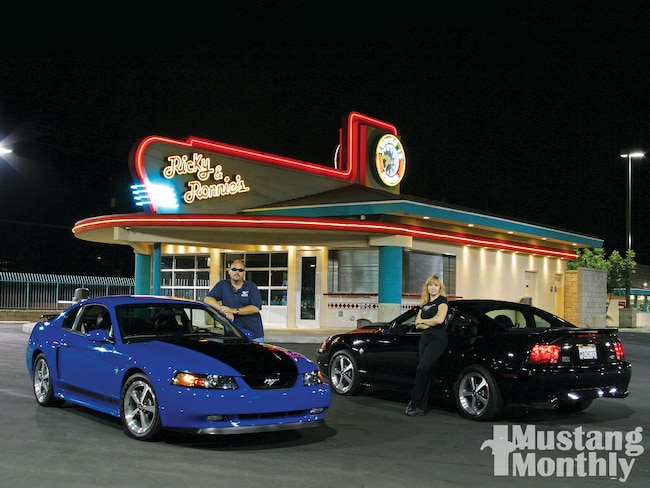 I can't remember the first time I met Jon Schultz, but it has been a remarkable journey ever since with energized moments I could have only experienced via L.A.'s biggest car club mover, shaker, and showman. If you were to ask me to describe Jon, founder and president of the Beach Cities Mustang Club, I would tell you he's Tom Arnold on steroids, an animated version of that "Arnie" character in the popular TV sitcom Roseanne. Think of Jon as the guy who maintains a full head of steam against all odds.

Unknowingly, Jon met his future wife, Pam, in 1998 when her former husband, a police officer, bought a Silver Blue '66 Mustang convertible. Because he didn't know much about cars, he needed help. One day while cruising his beat, he spotted Jon's Ford E-Series van with its Mustang shop logo. Jon thought he had been busted for speeding. But Pam's husband walked up and asked Jon about classic Mustangs. The next thing Pam knew, she and her husband were joining the Beach Cities Mustang Club.

Six years later, Pam was going through a divorce and needed help with purchasing a new car. After telling her brother she was considering a PT Cruiser, he shook his head and drove her down to Sunset Ford, where she was directed to the performance sales manager-Jon Schultz. "Jon seemed quite pleased to learn I was getting a divorce," Pam tells us.

After test drives in a variety of Mustangs, Pam narrowed her selection to a white '03 GT convertible or a black '04 Mach 1. From there, it was easy for Jon to sell Pam on the Mach 1 because he already had one, an Azure Blue '03 coupe. While Pam signed the papers, Jon was hitting her up for a date.

On her way home, Jon called to see how she liked her Mach 1. "Needless to say, I was impressed with the personal service and attention I was getting from my salesman," Pam tells us. "And the close personal attention and follow-up just kept coming."

On the day of their planned first date, at age 38, Jon awoke with chicken pox. Playing Santa Claus on Christmas Day by delivering toys with the Beach Cities Mustang Club is how Jon fell ill with what is normally a childhood illness. Weeks later, after a difficult recovery, Jon and Pam finally went out on their first date.

A Mustang-themed wedding soon followed, with 300 family and club members. The Schultz's Mach 1s surrounded the alter. Held in the same park where Mustangs at the Queen Mary takes place every year, the wedding included 50 Mustangs around the seating area-complete with window cards because the guests were asked to vote for their favorite Mustangs just like a car show. Each bridesmaid arrived in a convertible, followed by the bride in a '66 convertible.

Not long after the wedding, Beach Cities club members got together and spruced the Schultz's spare room into a Mustang themed nursery in preparation for the arrival of BCMC member 001 1/2, Jon Thomas Schultz.

"I am a big fan of the classic Mustangs," Jon relates. "I've owned a '67 Mustang coupe for over 20 years and recently picked up a '67 fastback project car." His commitment to the breed broadened when Ford announced it would build a Mach 1 for 2003. "I never thought of buying a new Mustang, but then rumors started about a new Mach 1 and I was hooked. There was real heritage there with the retro Magnum 500s, Shaker hood, rear spoiler, Mach 1 stripes, and rolled exhaust tips."

Like Jon's Mach 1, Pam's black '04 has all the features that made the original Mach 1 popular along with the advantages of evolution-a 305hp 4.6L DOHC V-8 with 3.55:1 locking rearend and the Interior Upgrade Package. Aftermarket upgrades include a Magnaflow exhaust system and a K&N Cold Air Intake. What makes Pam's Mach 1 more daily driver friendly is its AODE transmission, perfect for the Los Angeles commute. 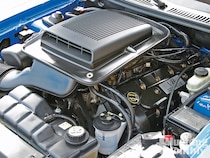 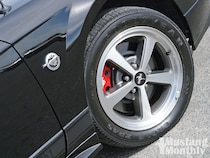 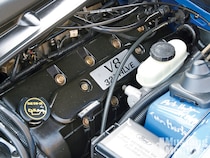 "It has been an incredible journey," Jon comments, "Who would have thought when I started this club in 1996 I'd have an incredible wife and an awesome son-and be surrounded by friends who have become an extended family."

Walking the Line
Running one of the nation's largest Mustang clubs has its perks. Over the years, Jon has made many friends at Ford, particularly at Team Mustang. In April 2003, Jon got the chance to walk the Dearborn assembly line as his '03 Mach 1 was built. Jon tells us, "I arrived in Detroit and the guy who was supposed to meet me was missing in action. I called Art Hyde, the most recent Chief Engineer and leader of Team Mustang, and explained the problem." Art came to Jon's rescue to make the assembly plant tour possible.

During his trip, Jon met Douglas Gaffka, one of Ford's lead designers. "He brought me into the design studio and showed me the S197 '05 Mustang-over a year before public debut. I was told not to talk about what I saw-and what a secret to keep!"

While visiting Gaffka and Mach 1's lead designer Melvin Betancourt, Jon asked if there was something the bean counters prevented them from doing on the Mach 1. Betancourt replied, "Originally, we wanted a wider, painted stripe that flowed into the u-shaped molding in the grille, but we couldn't get a hood that was painted two colors, so it became a thin vinyl decal." Betancourt took a table napkin and sketched the original hood stripe design. Later, Jon took the napkin to custom painter Eddie Gomez and had his hood painted to match.

When Jon's Mach 1 was started and driven off the line, Art Hyde finalized the build by autographing the strut tower. Nine days later, Jon watched his Mach 1 arrive at the Los Angeles railhead. Perhaps by coincidence or divine order, delivery took place on April 17, 2003, the Mustang's 39th anniversary.