Bob Tasca Jr. "Lived The Story" When His Father Dropped A Modified 428 Into A '67 Mustang Hardtop 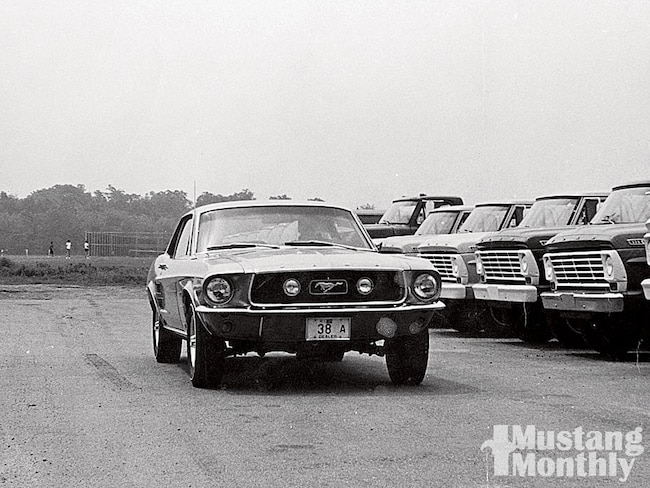 The story has been told in numerous books and magazine articles. For years, we've known how Rhode Island Ford dealer Bob Tasca replaced the blown 390 in a '67 Mustang with a 428 Police Interceptor equipped with 406 heads and other modifications from the Tasca Ford parts department. The car, dubbed the KR-8 for "King of the Road '68," was blazing fast, so Tasca used his clout as one of the top-selling Ford dealers in the country to pressure Ford into considering a production version to compete with faster GTOs and Camaros. Hot Rod magazine staffer Eric Dahlquist wrote an article about Tasca's KR-8 and suggested that readers contact Henry Ford II in Dearborn if they wanted to see the car in production. Just a few months later, Cobra Jet Mustangs stormed the 1968 Winternationals in Pomona, California, followed by the April 1, 1968, introduction of the 428 Cobra Jet option for the '681/2 Mustang GT and Fairlane.

That's the story in a lug nut. But what about the actual KR-8 Mustang? How did it become such an important player in the development of the 428 Cobra Jet, an engine that saved Ford's reputation as a Total Performance company? And what happened to the actual car?

"I lived that story, I can tell you that much," Bob Tasca Jr. told us. Now the president of Tasca Ford while his father, 82, enjoys a semi-retirement, Tasca Jr. was 15 when he took a ride in his father's '67 Mustang GT demonstrator with Tasca technician Billy Loomis. It was a ride that would change the course of Ford performance history.

"The Lime Gold notchback was my father's everyday driver," Tasca Jr. said. "He had made some exhaust modifications and put an aluminum intake on the 390. Billy was working on it one day, but I don't remember what he was doing. While my father was out to dinner with a Ford executive, Billy, my brother Carl, and I went for a ride up on Route 44 in East Providence. I'll never forget, Billy turned the car around and floored it. He thought the shifter was in 'D' but it was in '1.' I was thinking to myself, 'When is he going to shift?' But he didn't shift it. So it floated the valves and we blew the engine. We got it back to the dealership and my father was very upset when he found out we'd blown up his favorite car."

At that point, instead of repairing the original engine, Tasca Sr. asked assistant parts manager Glenn Tiberiis to order a 428 Police Interceptor short-block. "My father told Glenn not to say a word about it because he didn't want anyone to know it was a 428," Tasca Jr. says.

Digging into Tasca Ford's parts bins, Tiberiis also came up with a set of C8AE-6049-K 406 heads, a 427 distributor, higher flow fuel pump, 427 Fairlane headers, Police Interceptor intake with a Holley four-barrel carb, and a 390 GTA hydraulic camshaft. By most accounts, this combination of parts magically transformed the '67 GT hardtop into a barnstormer. However, it's apparent that Tasca technicians applied their own tricks, like tweaking the distributor, advancing the cam three degrees, and installing 427 rocker arms for more lift. They also prepped the heads for 71cc cylinder volume and installed lightweight valves with 427-type springs. Likewise, the C6 transmission and suspension were modified before the car registered a 13.46-second ET at over 104 mph on its first timed run. The KR-8 Mustang eventually ran a best of 13.39 at 105.

Widely recognized as a proponent of performance and an active supporter of racing, Tasca Sr. was also vocal about Ford's lack of performance offerings. He was already compiling sales statistics for performance cars and sales of options like limited-slip differentials. According to his breakdown, Fords accounted for only 7.5 percent of all '66 high-performance vehicle sales. From his business perspective, the competition's advantage was costing him money. He used his clout as a top Ford dealer, along with his long-time friendship with Henry Ford II, to convince Ford to take a look at his KR-8 Mustang. 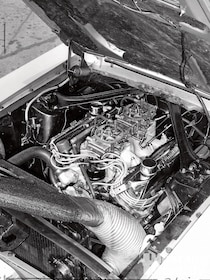 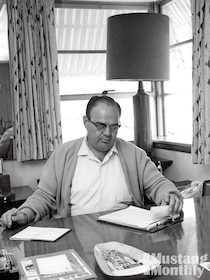 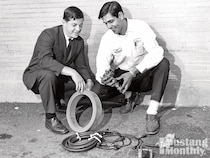 "In those days, we were king of Ford racing," Tasca Jr. says. "Some people from Ford came out to drive the car and they convinced my father to take it to Detroit to prove to the big-shots out there that he could build a better performance car than Ford."

You would think that Tasca Sr. would have shipped the car to Detroit. Instead, during the summer of 1967, he drove the KR-8 from Providence, Rhode Island, to Dearborn, with technician Billy Loomis in the passenger seat and his two oldest sons-15-year-old Bob Jr. and 13-year-old Carl, both on summer break from school-in the back seat. "Carl and I were a lot younger then so we fit," Tasca Jr. says with a laugh. "I remember we raced Ford's 427 Mustang and other cars on the dragstrip at the Dearborn Proving Grounds. We beat everything they had."

Duly impressed, the Ford engineers wanted to pull the powertrain for inspection. Tasca Jr. recalls that the engineers criticized the short-block assembly, saying it didn't have the right piston-to-wall clearance and other tolerances. Tasca Jr. remembers his father telling them, "I bought it from you. It's a stock 428 Police Interceptor short-block from over the counter."

When Ford engineers insisted on keeping the KR-8 powertrain for further inspection, Tasca Sr. told them he needed something to replace it for the drive home. Tasca Jr. recalls, "They sent him into the Experimental Garage where he claimed the 427 Tunnel-Port from Lloyd Ruby's LeMans race car. He also grabbed an experimental transmission and a special rear axle. While the Ford engineers were taking the KR-8 engine apart, we were putting the 427 in the Mustang."

Tasca Jr. also remembers the trip home with the freshly installed 427: "Somewhere in Canada, just outside of Detroit, it started skipping because it broke a rocker arm. So we took the pushrod out and drove all the way home on seven cylinders."

Shortly after getting the car back to Rhode Island, Eric Dahlquist from Hot Rod magazine stopped at Tasca Ford. It wasn't just a chance visit. "The fact that I wound up at Tasca didn't happen by accident," Dahlquist told us. "I was indirectly tipped off by a couple of engineers at Ford that if I was going East for my summer vacation, a stop at Tasca might prove interesting." Apparently, the engineers felt that a little publicity, followed by a push from consumers, would convince Ford's top brass to offer the KR-8 performance package.

Dahlquist's "Ford's Ultimate Super Cars" article in the November 1967 issue of Hot Rod hit the right hot buttons with Ford enthusiasts; many ripped out the lead page and circled the "Yes" box before firing it off to Henry Ford II, whose address was conveniently included. "All those 'ballots' went to Henry Ford II," says Dahlquist. "It became one of the most controversial stories I ever did."

The rest is history. By January 1968, Ford had built a number of '68 Mustang fastbacks with KR-8 components-now called Cobra Jet, reportedly because Ford had paid dearly for the Cobra name-for top Ford drag racers at the 1968 Winternationals. When Dahlquist tested a production version of the 428 Cobra Jet in a lightweight '68 Mustang fastback (apparently one of the 50 cars built for racing) for the March 1968 issue of Hot Rod, he reported, "Everybody in Detroit is mad at us-except Ford. With the help of about 2,000 of you out there in readerland who dutifully filled out the ballot in the November issue and mailed it to Dearborn, several key executives who doubted that Ford cars lacked competitive street performance have reversed their opinions." Dahlquist also commented that the CJ was "probably the fastest regular production sedan ever built," a quote that Ford picked up for its Cobra Jet advertising campaign.

On April 1, the 428 Cobra Jet was introduced to the world as a new 335hp performance option for the Mustang and Fairlane. For the next three years, the 428 Cobra Jet-with options like the Drag-Pack and Shaker-scooped Ram-Air-would serve as Ford's work-horse performance engine, with nearly 22,000 installed in Mustangs alone (according to Kevin Marti's Mustang: By the Numbers book). Shelby would cash in with the upgraded '681/2 GT500KR, which took its name from Tasca's original King of the Road KR-8.

But what happened to the original '67 KR-8 hardtop? Bob Tasca Jr. knows all too well. "I hit a telephone pole with it in October 1967," he admits. "I had just gotten my driver's license six weeks before. That was the end of that car." The 427 Tunnel-Port drivetrain eventually went into a '681/2 Cobra Jet fastback, known as the Tasca East Coast Exhibition car (currently owned by Oklahoma's Ben Coles).

Note: Tasca Ford remains in business today, although the location has moved from East Providence to Cranston, Rhode Island. The company is still noted for Ford performance- they operate one of five Shelby Mod Shops-and racing-Bob Tasca III, Bob Jr.'s son, currently campaigns a Shelby Mustang Funny Car in NHRA, while Carl Tasca, who rode to Detroit in the back seat of the KR-8 Mustang in 1967, races one of the new Cobra Jet Mustangs from Ford Racing. Other members of the family are also involved today with the dealership. Bob Tasca Sr. is still known to show up for work.

Our thanks to Ben Coles for alerting us to the story of the KR-8 and to Drew Hardin for tracking down Eric Dahlquist's Hot Rod photos and notes in the Petersen Publishing archives.

KR-8 Package
During his visit to Tasca Ford, Hot Rod's Eric Dahlquist made the following notes about the modifications to Tasca's KR-8 Mustang.