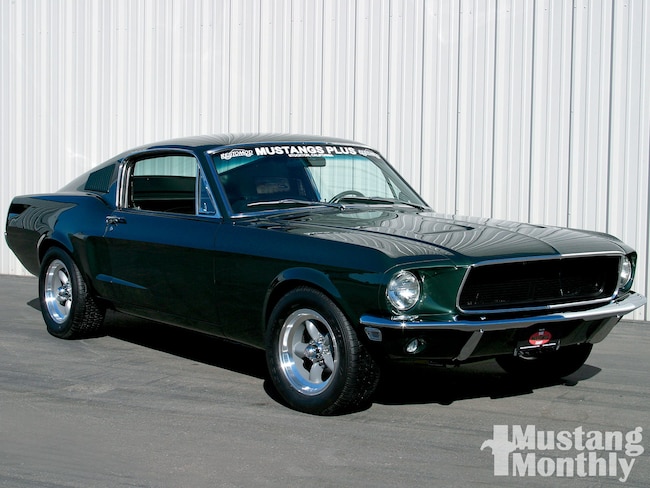 DURING ONE OF our visits to Mustangs Plus in Stockton, California, Dave Bramlett pointed out a Highland Green Mustang fastback in the shop. Spotting the Torq-Thrust wheels, mouthy grille, blacked out gas cap, and other Bullitt nuances, I thought to myself, "Okay, here's another Bullitt replica." I liked the idea, but we've seen quite a few of them since the movie's 30th anniversary's madness in 1998 when it seemed everyone, including Ford, was building Bullitt tributes.

Dave picked up on my lackluster emotions and said, "Actually, it's not a Mustang." He invited me to study the car closely but nothing caught my attention. When he pointed out the Dynacorn manufacturer's plate, it occurred to me I was looking at a brand-new Dynacorn fastback, not a Ford Mustang.

Dave and his brother, Ron, have seen their share of Bullet replicas and decided to do something different by starting with a reproduction '68 fastback body from Dynacorn. When Ron and Dave presented Terry Simpson at The Restomod Shop with the body, they offered him a blank canvass, limiting Terry to only the Bullitt theme.

Terry and his staff massaged the Dynacorn body to strict standards and laid down PPG DBC basecoat/clearcoat in Highland Green. There are no sidescoops, spoilers, or Eleanor front end. The whole idea behind the monochromed movie cars was no flash and glitter because that's not what Lt. Frank Bullitt would have wanted.

There are a lot of small-block Bullitt replicas out there but Ron and Dave weren't having any part of that. The real Bullitt Mustangs were 390 powered, so the Bramletts wanted real displacement power to go with the Bullitt look, ordering up a 428ci FE big-block. It's not a seismographic ground pounder, but instead more of what the 390 Bullitt cars were to begin with-stock, with obnoxious exhaust systems sporting glasspack mufflers, only Ron and Dave went with turbo mufflers.

In the tunnel is a Tremec TKO 600 five-speed trailed by a 4.11 Traction-Lok differential in a 9-inch case. Because the 428 is basically stock with Edelbrock Performer induction and a flat-tappet camshaft, it makes for an exceptional driver.

Underneath, you'll find a Grab-A-Trak suspension system married to Stainless Steel front disc brakes. In back are conventional drum brakes, which do an outstanding job of complementing the power front discs because there's actually more braking surface area in a drum.

Frank Bullitt would have appreciated the TMI Sports Seats with side bolsters and lumbar support. Beneath the carpet is Quiet Ride Solutions' sound deadening designed to shut out road noise. Outside, it looks like 1968. Inside, it's quiet like a 2010 Mustang. The Classic Instruments cluster has easy-to-read Mint gauges. Custom Autosound set Mustangs Plus up with a USA-5 sound system that includes AM/FM stereo, cassette tape, and CD player.

All things said, the Bramletts ended up with a nice tribute to the Bullitt legacy-although Dave still says it's not a Mustang.