Dave Spry never expected it to go this way. He and his wife, Carol, were looking for a '66 Mustang convertible when they found this High Country Special on the Internet. Isn't that the way it seems to work out when you're searching for a Mustang? You're looking for one thing but wind up with something even better than expected.

Interestingly, Dave had heard about High Country Specials but didn't know much about them. Most appealing was this convertible's robin's egg blue color known as Columbine Blue that was conceived for these limited-edition Mustangs. But before we tell Dave and Carol's HCS story, we must first tell the story of these unique Mustangs.

The High Country Special sale event was larger than your average year-end close-out. It involved 24 three-level railroad cars loaded with '66 High Country Special Mustangs. Assembled at Ford's Milpitas (San Jose), California assembly plant, they were headed for Denver area Ford dealers. There were pictures in the newspapers of a Rock Island Railroad train loaded with 333 High Country Specials. When they arrived at the Denver railhead, area Ford sales executives were waiting for them. The cars were distributed to Ford dealers as far away as Wyoming and Western Nebraska, which were in the Denver sales district.

The High Country Special would return for '67 and '68, the latter as hardtops with foglights, sidescoops, and Shelby-style rear spoiler like the California Specials.

Of the 333 High Country Specials for '66, approximately 30 were convertibles according to Bob Teets, who runs the High Country Special Registry. The Spry's convertible originally stickered for $3,437 at Goodro Ford on July 23, 1966, the first day of HCS availability. For the next 33 years, the convertible would pass through four owners in the Denver area before winding up with the Sprys in Estes Park, Colorado, in dire need of a full-scale restoration.

When the Sprys brought their '66 High Country Special convertible home, it had been repainted several times, with so many layers of paint on the hood that it resembled fiberglass with hairline cracks all over the place. Dave admits being surprised that everything was still there, including the High Country Special badges above the front fender emblems. The original 289-2V engine and C4 Cruise-O-Matic were still in place at 127,000 miles. Friends and neighbors helped Dave and Carol strip their Mustang convertible to raw steel for an exceptional repaint in its original Columbine Blue.

Although Dave had appreciation for the car's High Country Special status, he wanted to personalize it a bit to improve appeal. The car's original wire-style wheel covers were replaced with '65 styled steel wheels, while the interior was upgraded to the Interior Dcor Group in blue and white by Jerry's Upholstery in Fort Collins. Aside from the upholstery work, Dave performed most of this restoration himself.

Although '66 officially launched the three-year High Country Special program for Denver, it's a short but fascinating chapter in the Mustang's 45-year history. It was little more than a regional sales campaign designed to increase showroom traffic, but it left us with something to admire and chat about more than four decades later. 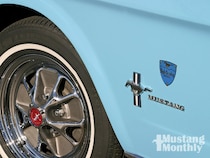 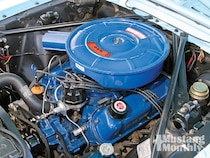