Jeff Sherger Owns 10 Mustang IIs; The "Red One" Is One Of His Favorites 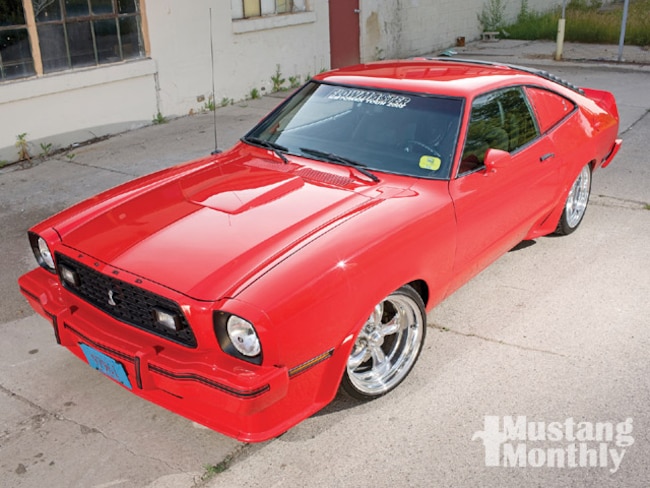 It takes a special kind of enthusiast to own a Mustang II. Despite selling over one million copies during its five-year production run, Ford's second-generation Pony gets no respect. Its quirky styling, svelte proportions, anemic powerplants, and modest Pinto underpinnings make it the butt of many jokes. With that kind of reputation, who on earth would own one?

Well, Allenton, Wisconsin's Jeff Sherger currently owns 10. We say "currently" because Jeff has owned more than twice that many over the years. His passion for the Mustang world's often-forgotten offspring began in 1984, when he purchased his first. He still owns it today. Naturally, some of the 23 Mustang IIs he has bought were donors; remember, parts are not as plentiful as those for earlier generations. Jeff adds, "Anyone who knows these cars agrees that if you are trying to modify a Mustang II, it requires a ton of patience. Many of the parts don't exist."

Jeff has owned this particular car, aptly dubbed "Red One," since 1992. Jeff admits it's not much of a nickname, just simply his answer to, "Which car are you bringing tonight?" It was born as the most desirable of the Mustang IIs: a '78 King Cobra. With a sprawling Cobra hood decal hiding a defanged 139hp 302, the King Cobras were hardly memorable. Like Elvis in polyester, the King unfortunately lacked the substance to back up its flamboyant appearance.

"A truck-driver friend happened to spot it for sale and called to tell me about it. I jumped in my truck as soon as I hung up the phone and drove down to check it out. When I saw the car, I knew I was buying it." It was already repainted a bright red hue but without the billboard-size decals. After bringing it home, Jeff made plans to replace the anemic 302 and automatic transmission with a more "lively" combination. 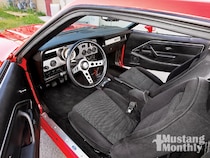 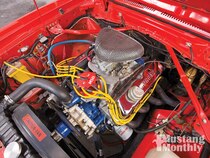 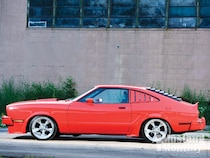 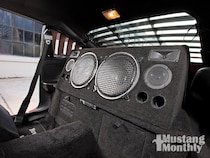 Jeff had the perfect donor: a '70s-era road-racing Mustang II. Since retired from battle, the brave warrior's healthy solid-lifter 302 and Top-Loader transmission were transplanted into Jeff's "Red One." The operation wasn't a simple pluck-and-plug affair, however. The racing engine's four-piece fenderwell headers necessitated that Jeff transfer the race car's re-engineered front suspension, which relocated the strut rods for clearance. Meanwhile, Jeff "massaged" the transmission tunnel to accept the engine's oversized scattershield, transmission, and Hurst shifter linkage.

With just 2,735 pounds to motivate, the new drivetrain transformed this garter snake into a seriously venomous asp. Contributing to the powerplant's allure are many vintage speed parts: a first-generation MSD ignition amplifier, a now discontinued Edelbrock Tarantula intake manifold, and a Pro-Flo air filter. A Hays flywheel and Centerforce clutch transfer power to a narrowed 9-inch rearend with 3.73:1 gears. Not exactly highway-friendly, but it's a hoot around town.

With a lowered suspension featuring Afco coils and adjustable gas shocks, Jeff doesn't have to slow down when the road curves. That's a good thing, because Jeff's Mustang II currently features the stock brakes. But if there's one element that single-handedly transforms Jeff's car, it's the 17-inch American Racing Torq-Thrust wheels. They're a perfect fit for the body's curves and monochromatic paint scheme.

The interior has been tastefully updated with later-model seats and AutoMeter gauges. If Jeff needs to hear his music over the exhaust, a sizeable speaker enclosure fills the back seat area. One of the most unique additions is a roof-mounted console from a Ford Tempo.

Obviously, Jeff's tenacity and affection for this Mustang II has paid off. Thanks to its thumping Flowmasters, red-hot paint, and killer stance, Jeff's King Cobra turns heads wherever it rumbles. Even with 10 other Mustang IIs in his stable, the Red One is one of his favorites.