Two Weeks After Purchasing His '69 Boss 429, Bill Schwartz Parked His New Mustang Over An Engine Warranty Dispute. As A Result, Today's Mileage Is Only 775

It takes a lot to shock and awe the experienced collectors at the Forge Musclecar Classic. Now in its sixth year, the 2008 event featured a comprehensive collection of Boss 429 Mustangs; efforts to find one of each color from both '69 and '70 brought cars to Tennessee from as far away as Montana and Texas. On the Friday evening before the show, the last vehicle to arrive was a Candyapple Red '69 Boss 429. Although not overly shiny or prepped like most of the others, it instantly became the focus of attention.

This is truly low-mileage for a 40-year-old muscle car.

That was because everything was original--the paint, the tires, the belts, the interior, and so on. The original purchaser (and still owner), Bill Schwartz, along with his wife, Helen, looked on with amusement as a half-dozen excited Ford collectors walked around and shook their heads in disbelief. The odometer had turned only 775 miles since coming from Don Rice Ford on March 28, 1969.

The 45th Boss 429 in a batch of 100 built by Ford's subcontractor Kar Kraft, this Boss had been known to Mustang expert Ed Meyer for the better part of 20 years. Having heard rumor of its existence in the '80s, he followed leads to find it, then spent time gaining the trust of the Schwartz family to inspect it on several occasions. He recounts one humorous incident:

"I was looking at the car and asked Bill to open the trunk. Bill said he had not seen the keys in years and figured they had been misplaced. Well, on a subsequent trip, he had located them and we went out together to open the trunk for the first time since 1969. Everything was untouched, including the spare tire and headlight adjusters, plus all the original smog equipment that the dealership had taken off to do the warranty work two weeks after it was purchased."

How had this car come to exist 40 years later without seeing 1,000 miles? After buying and driving the Boss 429 for less than two weeks, the exotic engine seized up. Bill wanted a replacement. But by that point, the factory was installing the T-series Boss 429 and not the NASCAR-derived S-series as used in Bill's Mustang. Bill insisted on getting an S-series replacement. The disagreement eventually ended up with lawsuits and lawyers before it was settled in Bill's favor.

The current engine is the replacement S-series Boss 429 that Bill finally received from Ford in a warranty dispute. He still has the original block in storage.

In the meantime, Bill had ordered a '71 429 SJC Mustang hardtop. With the Boss in storage, he simply tucked the replacement engine away with the stored car and kept racing the newer Mustang. While he never thought about it as a collectible, he told Ed he knew the car was special since the factory had discontinued production. It became simply out-of-sight, out-of-mind.

Forty years later, it's a virtual time capsule. The temporary tags are still with it. All the warranty paperwork, mail-in literature, and dealer paperwork is untouched. The owner's manual envelope and its associated paperwork is still in the glovebox. Bill himself had carefully peeled off the window sticker on the day the car was delivered. All of this created a Boss 429 reference that Ed says is the best he has ever seen. Indeed, Ed has often used this particular car as a reference when researching other Boss 429 Mustangs.

Like all Boss 429s built that year, standard equipment included the Boss 429 engine, close-ratio four-speed, and 3.91 gearing in a Traction-Lok rear. Candyapple Red was one of five colors available in '69, with the external identification signs being the hoodscoop, Boss 429 decals on the front fenders, and a small front chin spoiler. Kar Kraft did need to make some underhood modifications to fit the wide 429, reworking the shock towers, using a thinner replacement booster on the standard power brake layout, and moving the battery to the trunk. 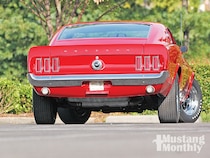 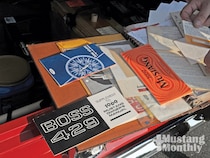 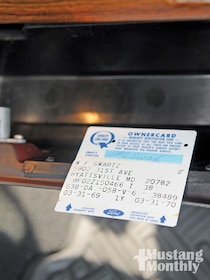 Here is something rarely seen --'69 Mustang headlight adjusters still sealed in the bag.

So when the Boss 429 Data Base announced it would help gather a complete variety of '69 and '70 colors for the 2008 Forge event, promoter Tim Lopata still needed a Candyapple Red '69. That's when Ed approached the Schwarz family about bringing their car out into public for the first time. At this point, the replacement engine had been installed for about 10 years. Though Bill had moved several times and his former careers included owning both a speed shop and a gas station, he had not driven the car with its replacement engine beyond a one-time trip down his country driveway.

Always a drag racer and never a collector, Bill had no compelling interest in reinstalling the "smog junk" until Ed came and did it himself just before the show last September. Ed also contributed a few other pieces that he knew would make the car absolutely right, but the ironic thing was that, as they finished it up, Bill said to him, "Do you think anybody would want to see these other blocks I've got?" That's when he showed Ed not one, but four spare Boss 429 blocks.

At Kar Kraft, the original tire sticker on the driver-side door was removed and a new Boss 429 version added. Obviously, cleanliness and detail was not paramount. This was one of the early cars that began as a Q-code 428 SCJ.

"I started checking serial numbers," says Ed. "And there was the original block. Bill had gotten it back from the dealership. It was too late to do anything about it with the show just a day away and us already running late, but now we know the original block is there, too."

As the trio arrived in Tennessee and the car was being unloaded, Helen thought for a couple of minutes and said, "You know, I have never even sat inside that old car." She got her first ride as Ed drove the Boss 429 through the roll-up doors and onto the carpet of the Marriott MeadowView Resort's convention center. After all, thanks to her and Bill, the hobby at large had a chance to see what may be one of the most incredible muscle car finds in recent memory.

Editor's Note: Right before we went to press, Bill Schwartz sold his Boss 429 to a collector who plans to display the car in a musem dedicated to low-mileage muscle cars.

The expiration date of 4/23/69 is still barely visible on the Bill's temporary tag. Due to the car's warranty issues, it was never registered or licensed.

S versus T
The reason Bill Schwartz parked his Boss 429 is that he knew the replacement engine Ford was offering him was not the same as the engine that came in the car. According to Mike Mueller's reference book, Mustang 1964-1973, the first 279 Boss 429s received S-code engines with heavy-duty NASCAR rods with ½-inch bolts that rode on a cross-drilled forged crank. But many had warranty issues, reportedly due to faulty short-block assembly work. After these were gone, Ford switched to a T-code version that looked identical but used lighter bottom-end parts, including rods with 3/8-inch bolts. The T-code engine would be used for the remainder of '69 Boss 429 production with a handful of minor changes, and would be superseded by a new A-code engine (upgraded smog equipment and solid-lifter valvetrain) before '70 Boss 429 production ended.

Rare Mustangs Run Wild
There are thousands of car shows each year, but one in particular has become the standard when it comes to rare muscle cars. The Forge Invitational Musclecar Classic event is open to the public for only one day, held indoors, and often hosts cars that are not seen outside of collections or museums. When it was decided that 2008 would highlight Boss Mustangs, everyone knew the stops would be pulled out to make it truly memorable.

No event of this magnitude is the result of just one individual's effort, and promoter Tim Lopata was quick to point out that it was the cooperation of members of the Boss 429 Data Base, led by Jeremy Feller, that made it possible. Thanks to them, one of every color Boss 429 from both '69 and '70 was on hand from private collections around the country. To them was added a number of other Boss, Shelby, and Mach 1 models, to the extent that the 2008 running of the show featured more Fords than any other make.

The 2009 Forge Musclecar Classic will be held at the Marriott MeadowView Resort & Convention Center on September 12, 2009. Go to www.forgemusclecarshow.com for more info.