To Mustang Monthly Readers, A Garage Isn't Just A Place To Park Cars

For some people, the garage is a place to store stuff. While primarily designed to house vehicles while they aren't in use and keep them out of the elements, many garages don't even have enough space for a car. You've probably seen one or two on your street-boxes piled to the ceiling, old lawn mowers and appliances stacked against the walls, or shelves lining the entire garage so the wife can stock her Amway business. Sacrilege, we say.

For car lovers, and that obviously includes Mustang Monthly readers, the garage is typically an extension of the home living area. Whether it's an attached single or a separate and purpose-built garage/workshop/rec-room, the Mustang owner's garage is a sanctuary, a place for working on the car (or cars), displaying trophies, hanging Mustang/Ford posters and photos, showing off die-cast collections, and lounging with friends. As you can see from the following photos and descriptions, Mustang Monthly reader garages are just like their Mustangs-mild or wild, but always clean and well-detailed.

Cozy Calypsos
Ken Denure created a cozy spot for his pair of Calypso Corral '70s, a Boss 302 and Mach 1. Decorated with old gas pumps and NASCAR memorabilia (he's obviously a Rusty Wallace fan), the Denure garage/workshop also includes cabinets salvaged from a church fire, a display area for his many trophies, a TV, a refrigerator, and a comfy recliner.

Built by Ebay
Glenn Dispoto of Hollywood, Florida, finally tired of the mess in his garage, so he gathered up all the extra parts obtained during the restoration of his three vintage Mustangs and sold them on eBay to fund the overhaul. With help from his brother, Glenn built walls to conceal pipes and wires, then painted horizontal stripes on them with red baseboard trim. Next came the installation of an Armstrong checkerboard floor and a Craftsman cabinet system. The garage currently houses Glenn's '70 428 CJ Mach 1, '71 convertible, '72 Mach 1, and '05 GT.

Little Help From His Friends
After years of storing his '70 Shelby GT350 in a remote storage facility, Steve Trevisan decided to build a proper garage for his treasured fastback. Located on his home property in Barto, Pennsylvania, the 36x48-foot detached garage was built by Steve with a little help from his friends. He says, "I need to give a big shout out to Mike Raddisan for the electric work and Mark Bedle for all his hard work in getting the garage done in less than a year." Starting with a steel-frame building, the garage is finished with a concrete floor with blue U-Coat-It coating, cabinets, full water and electricity, and a 22x12-foot paint booth. "The paint booth was an afterthought," Steve adds. "It's a great place to paint and practice my airbrushing." An autobody repair/painter by trade, Steve recently joined the team at Glazier/Nolan Mustang Barn Restorations in Souderton, Pennsylvania. 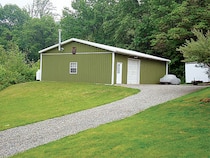 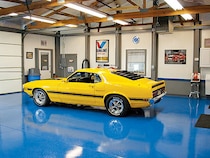 Belly To The Bar
Tom Ostendarp says he and his wife spend most weekends and holidays in their Amelia, Ohio, garage visiting with neighbors. Measuring 21 by 21 feet and attached to their home, the garage features a raised bar area that overlooks the Ostendarps' 27,000-mile '03 Mach 1. The walls are decorated with vintage clocks, car advertisements, and automotive signs. There's also a TV for watching the races and a couple of vintage Coke machines. The concrete floor is covered with four coats of gray floor paint, while the bar area gets a soda-shop look with black-and-white checkered flooring.

Trailer Parked
There's nothing particularly fancy about Andy Banas' garage. "It's not the Taj Mahal," he admits. "It's actually a 20-foot office trailer." Needing something with adequate protection for his '66 Shelby during the Pennsylvania winters, Andy says the old office trailer filled the bill because it's wired for lighting and has heat and air conditioning. "I even have a comfortable office space in the back for reading the latest issue of Mustang Monthly."

Saleen Shrine
We'll let Debbie Nunez explain her husband's domain: "In order to spend time with Sergio, I sometimes enter his 'shrine' and cuddle up on the futon with a Mustang-embroidered throw. On the wall is a 35-foot mural of my '06 V-6 Mustang and my husband's '05 Saleen, painted by my father-in-law. The shop is 1,820 square feet of pure Mustang. The stairs leading to the loft are lighted, with each step designated by a different Mustang model. The loft is dedicated to die-cast cars, displayed on two huge tables. From the loft, our boys have access to 1,400 feet of raised racetrack for remote-controlled Mustangs only. The main part of the shop (I call it the 'Boys Club') has shelves with trophies won by both cars, not to mention posters, photos, T-shirts, and caps, all autographed by Steve Saleen. The two cars are so clean they can drive in and out with no problem, but how dare I walk in wearing my gardening shoes!"

Mustangland In Sugar Land
Gerry Oakley from Sugar Land, Texas, proves that you can create a neat two-car garage. His '06 Mustang GT gets its own space, which is neatly festooned with Mustang signs and posters, vintage thermometers, and a Mustang Club of America neon clock on white pegboard. The black, red, and silver theme is carried out on the floor, made from interlocking tiles from Race Deck. Cabinets and tools are from Craftsman.

Big Garage For Miniature Mustangs
Tammy and Scott Moen's garage may hold the record for number of Mustangs. Not only does the "Mustang Garage" hold the couple's '84 20th Anniversary convertible and '04 Mach 1, it also stores their collection of more than 3,500 miniature Mustangs, from plastic models to die-casts. "In 2000, we decided to house our big Mustangs with our little Mustangs," Scott tells us. "So we built a 20x36-foot second garage and attached it to the back of our main garage." The garage is heated and air-conditioned, and has a cathedral ceiling with recessed lighting and ceiling fans. Walls are covered with display cases, pictures, posters, and Ford dealership memorabilia.

Bob's Mustang Museum
Bob Dedeluk retired from Ford in 2000 after 35 years of service. "Now I'm enjoying every minute of not having to go to work," he says. "I can do as I want when I want." Part of the fun is spending time in his detached 28x40 garage, which houses his '01 Cobra (No. 21, the first production unit sold to the public), '66 hardtop, and '851/2 SVO. "I built the garage for the Mustangs but it's also become sort of a Mustang museum." In addition to Mustang items, Bob has decorated the garage with some of his other favorite things, including a vintage gas pump, a fire hydrant, drive-in speakers, traffic lights, and a pair of stadium seats from the old Tiger Stadium in Detroit. In addition to the toolbox, workbench, and shelving, Joe also outfitted the garage with a TV, a VCR, and a boom-box radio.

Toy Box
"I call it my 'toy box' but my wife calls it the 'operating room' due to its always spotless condition," says Bill Wells about his four-stall garage. "Stalls one and two are for our daily drivers, but the other two are for my three toys-a modified '65 Mustang convertible, a Superformance Cobra replica, and a '57 Thunderbird." A four-post lift allows Bill to store two of the cars in one stall. Heated and air conditioned to stave off the extremes of the weather in Bloomfield Hills, Michigan, the garage is fully insulated and finished inside. The floors are epoxy-coated with a non-skid clearcoat on top for an "always wet" look. Floor drains in each stall aid cleaning. A 15-foot built-in cabinet with workbench provides storage and work areas, as well as space for a TV, radio, iPod booster, and CD player. Electrical outlets are plentiful for 110v and 220v, with retractable power cords available as well.

Garage Mahal
Bernie Hamilton Sr. and Jr. spent three years building their two-story garage/shop for their pair of '69 Boss 429s, '68 CJ Mustang, and '71 Corvette. Yes, we said Corvette, but in a reversal of the usual engine swap, the Hamiltons' fiberglass Chevy is powered a Boss 429 engine. The collection is housed in the 40x30 all-brick building equipped with a parts storage loft, a four-post Rotary lift under an 18-foot ceiling made from knotty cedar, polished diamond plate to protect the lower walls, and an 8-foot I-beam with an overhead trolley and chainfall, all the better for dropping Ford engines into Corvettes. When working on the cars, Bernie Sr. and Jr. can take advantage of a Snap-On Mustang 40th Anniversary toolbox, a Miller MIG welder, and a Mac air compressor. For leisure, the garage is equipped with a 46-inch flat-screen TV, a refrigerator, and a weight room on the second floor.

Blue, Red, And More Red
Better have your shades handy when Joe Nemeth opens the door to his garage. Inside is his red '08 Shelby GT500, blue '07 GT convertible, and red '01 Cobra, all parked on matching red-and-blue checkerboard flooring, as installed by Ispiria of Naples. Joe and friends also decorated the walls of the 1,200 square-foot garage with red and blue stripes.

There's Always One
"I figure you're going to get tons of rich guys showing you their glass-floor man caves, so I thought you needed a polarizing photo of the worst case," explains Monty Winget from Yorktown, Virginia. "I take the junk off each May and drive only on good days until fall. As bad as it looks, the car still attracts attention and smiles. Everyone wants to buy it."

Mustang Haven
When cabinet maker Thad Landaiche outgrew his home wood-working shop, he moved his business to a new, larger location. So Thad faced a dilemma: "What do I do with an 18x40-foot empty cabinet shop?" It wasn't a difficult decision. "Now I have the enclosed garage I always dreamed about," he says. For the past two years, Thad has been remodeling his former wood-working shop into a Mustang stable for his '68 Mustang hardtop, '68 Shelby GT500KR, '72 convertible, and '94 Cobra. As a 30-year collector of model cars, parts, signs, posters, and vintage Mustang ads, it didn't take him long to decorate the walls. He and his three sons also use the garage as a game room, equipping it with pool, air hockey, and foosball tables. Thad made the cabinets, with room for a refrigerator, of course. "It has become a place for parties with my friends, including the entire Baton Rouge Mustang Club. At the end of the day, I put the A/C on high, turn up the radio, and go to work on my Mustangs in my own Mustang haven."