At Florida State University, Renegade Is The Name Of The Mascot's Horse, So FSU Fan Jeff Billings Feels It's Also A Fitting Name For His '67 Shelby Tribute Convertible

Jeff and Robin Billings are good examples of being true to your school. Both are Florida State University graduates, and both continue to be nuts about the Florida State University Seminoles, whose mascot is Chief Osceola and his horse, Renegade. If you follow college football, you know FSU has a long-standing tradition where Chief Osceola charges down the field on Renegade and thrusts his flaming spear into the turf at the start of every game.

Mustangs are another passion for Jeff and Robin. When Jeff's family moved to Fort Lauderdale in 1968, his father bought a '67 Mustang hardtop. In 1980, Jeff purchased this '67 convertible and performed a cosmetic restoration that summer before entering FSU in the fall.

Jeff met Robin at FSU, where the couple went on their first date in this car. Jeff laughs about it today because Robin had just had her hair done, so he didn't score points for showing up with the top down. Regardless, the two eventually married. In 1986, the Mustang went to weekend-driver status until Jeff put it in storage in 1989 because there were children to raise, leaving no time to mess with a classic car.

In 2001, Jeff blew the dust off for a restoration, but he didn't bring it back to stock. He always wanted a '67 Shelby GT350, but that wasn't in the cards. For one thing, other than a single prototype, Shelby never built a '67 convertible. For another, Jeff couldn't afford a real GT350. Imagination being what it is, he decided to build a tribute to Shelby's legacy.

After a job transfer to Tennessee, Jeff started the restoration in earnest. For two years, he molded the convertible into his vision of a '67 Shelby, starting out by rebuilding a 5.0L high-output engine plucked from a '93 Mustang GT. Craving more power, he added AFR 165 aluminum heads, a Ford Racing B-303 roller camshaft, 1.6:1 roller rockers, an Edelbrock Performer RPM dual-plane manifold, a Holley 670 Street Avenger carb, Hedman shorty headers, and an MSD ignition. For gear-shifting efficiency as well as performance, Jeff opted for Ford's automatic-overdrive transmission with no modifications. In back, a 9-inch Ford rearend is fitted with 3.89 gears in a Detroit Tru-Trac differential.

With the increase in power, Jeff enhanced the handling with Mustang Plus' Grab-A-Trak suspension (620-pound front springs; mid-eye, five-leaf rear leaf springs; KYB gas shocks; and a 1-inch front sway bar), the Shelby 1-inch front A-arm lowering modification, and a Flaming River steering box. Stainless Steel Brakes Corporation provided the power front discs, while rear braking is capably handled by large drums from a Fairlane station wagon. The 15x7-inch American Torq-Thrust D wheels are just like the ones we remember from the '60s. They're covered with BFGoodrich 215/60/15 Radial T/As.

Inside, true to a '67 Shelby GT350, Jeff went with the Interior Dcor Group in brushed aluminum and Pastel Parchment vinyl. This one's loaded with Convenience Group, a tilt wheel, a console, an AM/eight-track, and full instrumentation. Three-point safety belts add that extra-added margin to the trip. A Custom Autosound six-disc CD player in the trunk enables Jeff and Robin to bring their favorite tunes along. 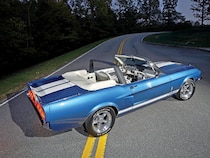 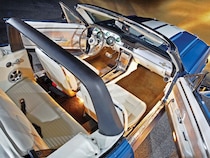 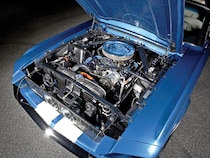 Where this GT350 replica really shines is its good looks. The body is clad in Shelby fiberglass and painted Acapulco Blue, a 1968 color first made available late in the 1967 model year. Jeff credits the car's execution to Robin and his sons, Greg and Robbie. He also tips his hat to the Music City Mustang Club, which has been helpful along the way.

For Jeff and Robin, this Mustang takes them back to their first date 27 years ago. It remains a symbol of their passion for Mustangs-and Seminoles football.