The Right Car At The Wrong Time

In a way, 1986 represents the end of two Ford performance eras, one long and illustrious and the other short but furious. With the introduction of fuel-injection for the Mustang's 5.0L V-8, the carburetor's 24-year run as the small-block's induction of choice came to an end. And, in an unfortunate twist of fate, the three-year production of the high-tech Mustang SVO, a car that was perhaps ahead of its time, also ended.

After a 10-year hiatus from racing, Ford reentered the performance arena in 1980 with the creation of Special Vehicle Operations, led by Michael Kranefuss, a German who had spearheaded Ford's European racing efforts in the '70s. SVO's small group of engineers was challenged to reinvent Ford's performance image by providing assistance and financial support to race teams and by creating a racing and high-performance parts program, which became known as Ford Motor-sports. To finance and promote these efforts, SVO was expected to develop and market, through Ford, its own limited-production, high-performance car.

Based on the existing Fox-body platform, the resulting SVO Mustang, introduced in the fall of 1983 as an '84 model, was unlike any Mustang that came before it. The SVO engineers and designers were a close-knit group, and unlike mainstream Ford, they were able to quickly develop modern technology for their nameplate vehicle. The '84 SVO would incorporate several Mustang firsts, including intercooled turbocharging, multi-port fuel-injection with EEC-IV processing, four-wheel disc brakes, 16-inch wheels with Goodyear Gatorback tires, and a bi-level rear wing. Other SVO technology would find its way into future Mustangs, such as the aero-styled frontend, quad-shock rear suspension, and a dead pedal mounted to the left of the normal pedals so drivers could brace themselves while clipping apexes in tight corners.

Ford already had a tire-burning torque machine in the 5.0-powered Mustang GT, so the SVO engineers looked to a small-displacement, turbocharged four-cylinder for its Mustang. Based on the reliable SOHC 2.3L, the SVO's intercooled turbocharging generated 175 hp-the same as '84's carbureted 5.0L V-8. The air-to-air intercooler, which sat on top of the engine to draw air from the off-set hoodscoop, dropped the intake air temperature by up to 125 degrees, allowing 14 psi of boost with premium fuel. Thanks to the new EEC-IV engine management system, drivers could also run unleaded regular, and with a push of a fuel selection switch on the dash, boost was limited to a safe 10 psi with the lower octane.

With 150 fewer pounds over the frontend compared to the 5.0, the four-cylinder also contributed to the SVO's excellent handling characteristics. Stopping just short of calling it the best-handling Mustang ever, Motor Trend described the SVO as "the best-driving street Mustang the factory has ever produced." The suspension, which included Koni adjustable shocks, revised spring rates, and thicker stabilizer bars, was developed by SVO's Bob Negstad, whose roots could be traced to the '60s when he created the chassis and suspension for Shelby's 427 Cobra and Daytona Coupe.

The SVO continued into 1985 with few changes, most notably the switch from 3.45 to 3.73 gears and quicker 15:1 steering. However, at mid-year, the SVO's horsepower rating jumped to 205 with increased boost, an improved intake, 35-lb/hr injectors, a new camshaft, updated EEC-IV processor, and dual exhaust. The combination of gearing and horsepower improved the SVO's quarter-mile performance by half a second, dropping it into the low 15s at more than 91 mph. 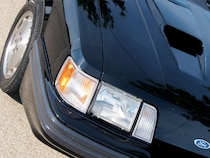 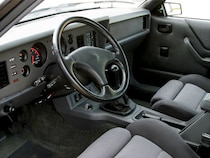 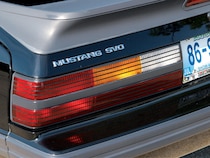 The '86 SVO was basically a carry-over of the performance-improved '85-1/2 model. Horsepower dropped slightly to 200 thanks to a reprogrammed EEC-IV that accommodated lower octane fuel, and the bi-plane rear wing got a federally mandated third brake light. More importantly, the SVO's three-year run as the top-of-the-line Mustang was coming to an end. Even as the first SVOs were rolling off the assembly line in 1984, Ford was making plans to replace the Mustang after 1986 with the Mazda-based Probe. Kranefuss and his team were duly informed that SVO Mustang production would end as well.

In a twist of fate, Ford later elected to continue Mustang production at least through 1993. But by then, it was too late for the SVO. On April 22, 1986, the last SVO Mustang rolled out of the Dearborn Assembly Plant.

With fuel prices on the rise in the '80s, SVO was ahead of the curve in terms of fuel-efficient horsepower. Kranefuss even predicted that V-8 engines would disappear by the end of the '80s. However, as SVO production ended, Ford was preparing to unleash a 225hp version of the 5.0L for the '87 Mustang. Enthusiasts soon discovered that, yes, they could still modify fuel-injected Mustangs, and the 5.0 launched a V-8 performance revolution for the Mustang that continues to this day.

Although the SVO was gone, its influence was found on future Mustangs. The '87 Mustang GT featured a similar aero-nose with flush headlights. Quad-shocks became standard equipment on 5.0-equipped Mustangs. The '93 Cobra took advantage of four-wheel disc brakes and the SVO's taillight covers. And of course, the EEC-IV engine processor, first used in the SVO, was a large factor in the success of the '87-'93 5.0 Mustangs.

The SVO ranks as one of the greatest all-around performance Mustangs of all time. Unfortunately, it just wasn't the right time.

History Preserved
Jim Doiron purchased his '86 SVO new in Kansas City, Missouri. Even then, he realized that the limited-production Mustang was something special and he set out to preserve his piece of Mustang history. Today, the car has just over 8,000 miles to rank as the second lowest mileage SVO Mustang in the SVO Registry, as maintained by the SVO Club of America (www.svoca.com). "It has never seen rain or bad weather," Jim says. "The interior still smells new."