There are Mustangs with racing history and there are Mustangs with a lot of racing history. In most cases, the history can be found in books and registries. For Jan Nelson and Frank Dobias, most of the extensive history for Shelby Group II Mustang No. 6 is in their own memories. In fact, the longtime partners have owned the car for more than 37 years. 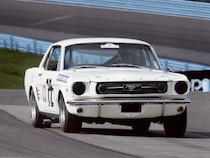 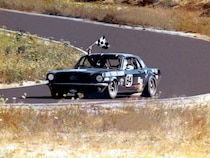 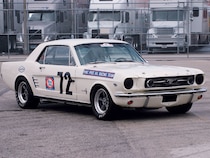 When Jan and Frank purchased the hardtop in March 1970, it was little more than a used race car, acquired so they could enter northeast enduros and Trans-Am events. They competed in six Trans-Am races in 1970. They went up against the factory-backed Bud Moore Boss 302s driven by Parnelli Jones and George Follmer at Lime Rock, Bryar, Mid-Ohio, Bridgehampton, Quebec, and Watkins Glen. "I just tried to stay out of their way," Jan says. "I couldn't believe how quickly they came around again."

The history of Shelby Group II No. 6 reaches back much further, all the way to March 1966 when 16 '66 Hi-Po hardtops were delivered to Shelby-American for conversion into SCCA Group II race cars. According to the Shelby-American World Registry, the racing hardtops were the result of the SCCA's new National Championship series for sedans, one for amateurs and another for professionals, called the Trans-American Sedan Championship, or Trans-Am for short. Lured by the Manufacturers' Trophy, Ford asked Shelby-American to develop the Mustang into a Group II race car. Rules limited the cars to a 116-inch wheelbase, a 305ci engine, and a four-seater configuration. The Shelby GT350 couldn't be used because it had already been homologated as a two-seater for B/Production racing.

The Group II Mustangs were mechanically identical to the GT350 R-Models, with a competition-spec 289, a side-exiting exhaust, lowered A-arms, a Monte Carlo bar, override traction bars, a four-point rollbar, competition seatbelts and shoulder harnesses, a trunk-mounted battery, a 32-gallon gas tank, American Racing magnesium five-spoke wheels, and other competition equipment. Trans-Am rules required that Group II cars retain the factory steel hood, the original glass, the interior (the door panels and dashpad, among other things), and the steel front valance. 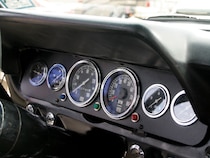 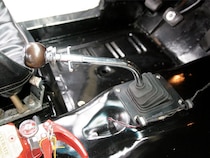 Several Group II hardtops helped Ford win the Trans-Am Manufacturers Championship in 1966. But car No. 6 was the only Group II car prepared for international FIA endurance racing. It was sold to Gofaster Inc., which was owned by John Norwood. It was then entered in the '67 24 Hour Daytona Continental under the Ring Free Oil Racing Team banner. Drivers Ray Cuomo and Paul Richards brought the white hardtop home with a First in class and 11th overall, assuring its history as a Daytona champion.

Unlike its sister cars, which competed throughout 1967 and 1968, No. 6 didn't return to competition until 1969. That was when John Gimbel traded a '67 Shelby GT350, its trailer, and '63 Oldsmobile station wagon tow car for the Group II. He used it to acquire his racing license, then he entered it in the '70 24 Hours of Daytona, where he and codriver George Lisberg finished with a Second in class and 16th overall.

Shortly after its impressive 24 Hour performance, Jan and Frank purchased the Mustang to begin their nearly four-decade relationship with the car. In addition to the '70 Trans-Am races, the No. 6 hardtop competed in a number of national and regional SCCA races, several Trans-Am events during 1971-1976, and IMSA Camel GT competitions. It finished in Fifth Place at the 1971 Summitt Point event, an impressive feat for a five-year-old race car. The Mustang underwent several color and configuration transformations throughout the years, from its original Wimbledon White to silver and black for the '70 Daytona race, to orange and black for the '70 Trans-Am season, to dark blue from 1971-1980. The car ran its last laps in competition at a four-hour regional enduro at Bryar Motorsport Park in 1980. During its modifications for different series, much of the R-Model equipment from 1966 was removed. Fortunately, Jan and Frank had the forethought to keep the original parts.

The old race car sat in Frank's garage for the next 17 years, then it was in Jan's garage for another 5. The pair then embarked on a four-year restoration to bring the car back to its original 1966 configuration, as raced at Daytona in 1967. Almost 300 hours were required to restore the body after 13 years of racing and updating. Besides the final paint, Paul Trinca of Paul's Auto Body in Glendale, New York, straightened, cut, and welded patches into the original sheetmetal, including the floorpan, the trunk, and the rear quarters. The goal was to retain the original pieces. Using photos obtained from the Daytona Speedway archives, Jan and Frank painstakingly recreated the car's numbers, decals, paint, and even the lights on the fenders and trunk that were used to illuminate the numbers during the darkness in 24-hour races. Original parts were pulled out of storage to be reinstalled, including the fiberglass panel between the trunk and passenger compartment. Most Group II racers threw away the panels when subsequent rules required a metal bulkhead.

Last summer, Jan and Frank debuted their freshly restored Shelby Group II Mustang at SAAC-31, the Shelby American Automobile Club's national convention. A couple of months later, the car participated in a Trans-Am reunion during the Rolex Vintage Festival at Lime Rock. There it was reunited with Chuck Cantwell, the Shelby Project Manager who worked on the Group II project in 1966. The Mustang received a pair of prestigious awards for the Rolex Best of Show and the BMW Best Presentation and Performance. This past February, we caught up with Jan and Frank during the '07 24 Hours of Daytona. Their Mustang had been invited by Joe Pendergast of the Daytona Heritage Exhibition to participate in a parade lap and display celebrating former Daytona champions.

The Shelby Group II hardtops have long been overshadowed by the more visible Shelby R-Models. Thanks to Jan Nelson and Frank Dobias, car No. 6 reminds everyone that the Group II Mustangs earned their share of glory as well.