In 1965, Shelby American Didn't Sell All Of Its Original GT350s. Russ Furstnow's Carryover '66 GT350 Is One Example Of How Delicious A Leftover Can Be.

When I met Arizona's Russ Furstnow for the first time, we were a couple of baby boomers lamenting (and laughing) about the realities of growing older. We also commented about the great memories of growing up in the '60s-fast cars, 25-cents-a-gallon gasoline to cruise all night for three bucks, and a lot of great music. We'll leave the rest to your imagination.

Russ and I came to the conclusion we'd never be able to cruise all night for $3 again. However, we did conclude it's still possible to live fast cars and listen to that great '60s music. That's when Russ lit the 289 High-Performance Cobra engine in his '66 Shelby GT350, SFM-6S-009. Listening to the clatter of 16 mechanical tappets, the song "Born To Be Wild" came into my head.

If you remember the '60s, you'll appreciate Russ' Wimbledon White '66 Shelby GT350. At first glance, it's surely a '66, with side scoops, rear-quarter glass, horizontally barred Mustang grille, and other nuances. However, closer inspection reveals this is really a '65 carryover car. It started out as a '65 Mustang fastback at San Jose's Milpitas Plant before being shipped to Shelby American in Los Angeles for the GT350 conversion. Because it was a leftover '65 and timing placed it in the fall of 1965, Shelby had to build and serialize the car as a '66 GT350. And this is where we learn the truth about the first 252 '66 Shelby GT350 Mustangs. They were all carryover cars from 1965.

How can you tell if you're looking at one of the first 252 units? The instrument panel has the five-dial cluster, which is a '66 nuance. But the seats and door panels are clearly '65 items that go hand-in-hand with the car's original Falcon cluster. The '65 289 High-Performance engine is painted black, as opposed to Corporate Blue in 1966, and the four-speed is a Borg-Warner aluminum T10, common to '65 Shelby Mustangs.

On October 29, 1965, Russ' Shelby was shipped to McFayden Ford in Omaha, Nebraska. Sticker price was $4,428, plus shipping and taxes. Not cheap in 1965 dollars, when minimum wage was well below $2 an hour. When this Shelby was completed at Shelby American, it was virtually void of options: Ford steel wheels and Goodyear Blue Dots, no rear seat, conventional 3.89:1 rear axle, and little more. What surprises us most is how long this car sat on the McFayden lot before being sold new to David Kimlicker on September 12, 1967. That's two years, proof there weren't a lot of buyers lining up for these cars. They were fast, but priced way out of reach for most buyers at the time.

In 1989, Ron Starnes of Tulsa, Oklahoma, purchased this car, completely disassembled, with the intent of restoring it to its former glory. Floorpans and quarter-panels were replaced. The engine, transmission, and rear axle were rebuilt and ready for action. Shelby veteran Jim Wicks handled the detail work to make the car right. Wicks also installed the Shelby Cragar wheels with their new-old-stock center caps.

In 1995, Russ spotted the Shelby at a show in Fort Worth, Texas. A short time later, it was on its way west with him. Now, when he walks in the garage and looks at his carryover GT350, he knows he's a baby boomer who can still live the fast cars of the '60s. 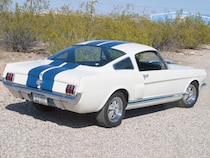 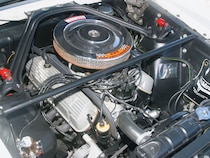 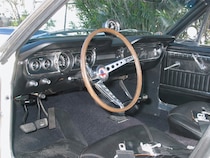 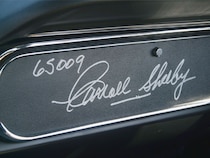 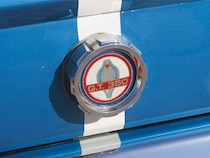