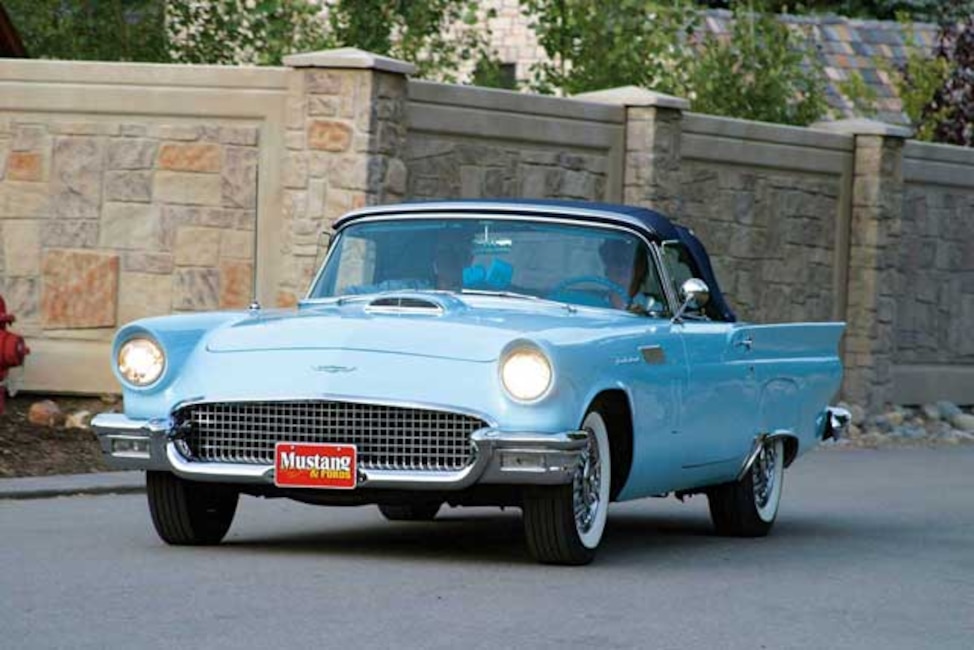 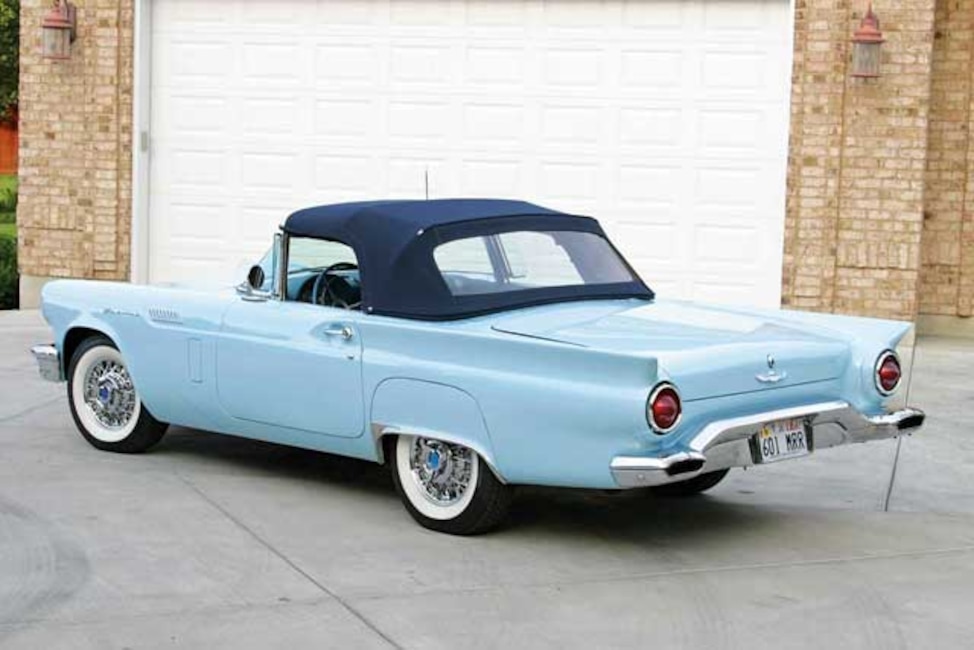 This is the original Starmist Blue finish and convertible top. In 50 years, this top has never been down. 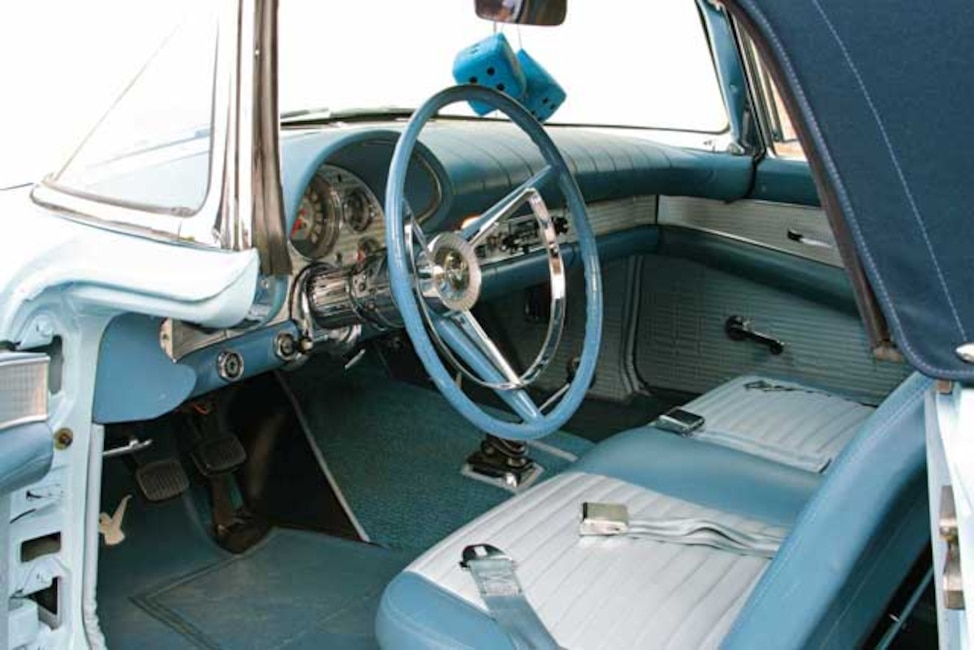 The interior is also factory original except for a Custom Autosound system and period-correct seatbelts for safety. 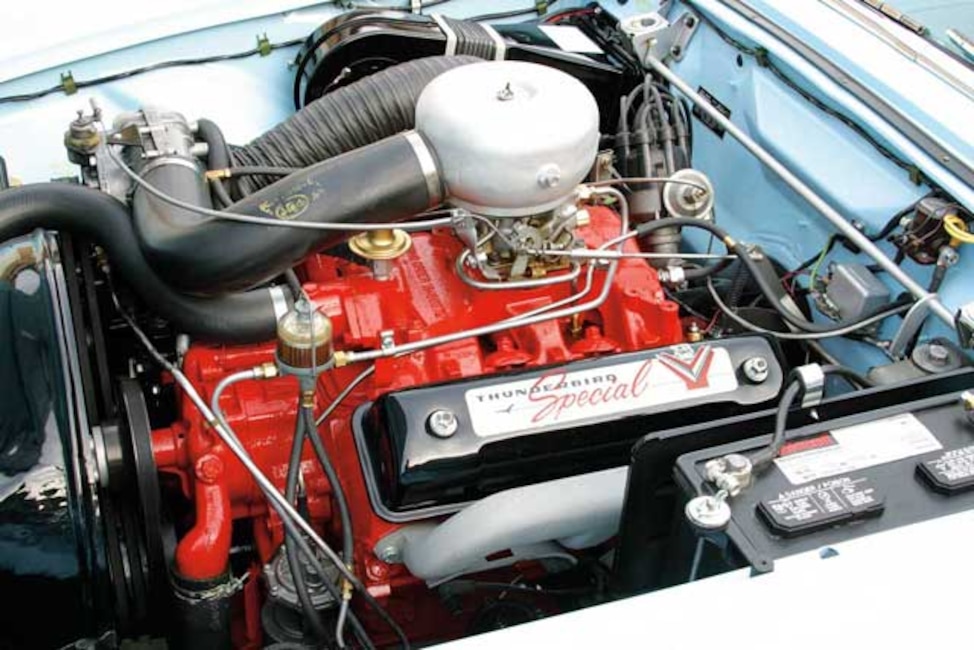 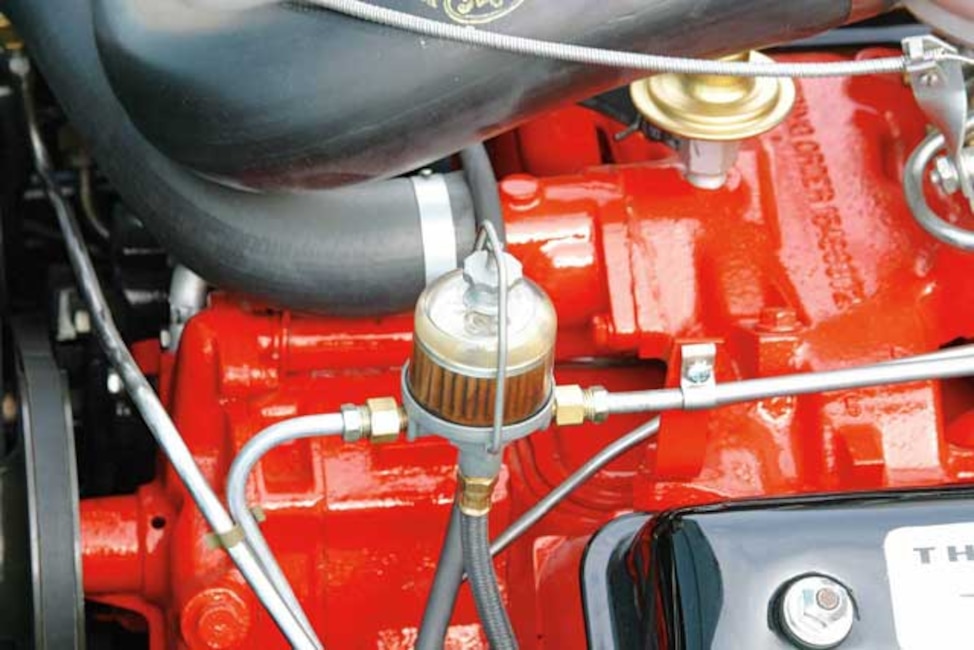 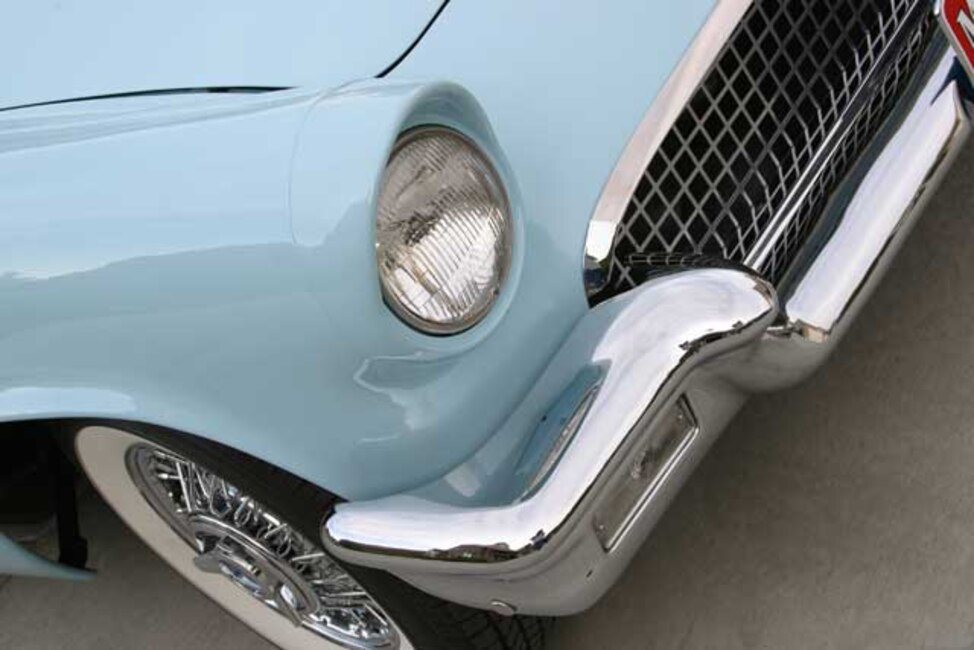 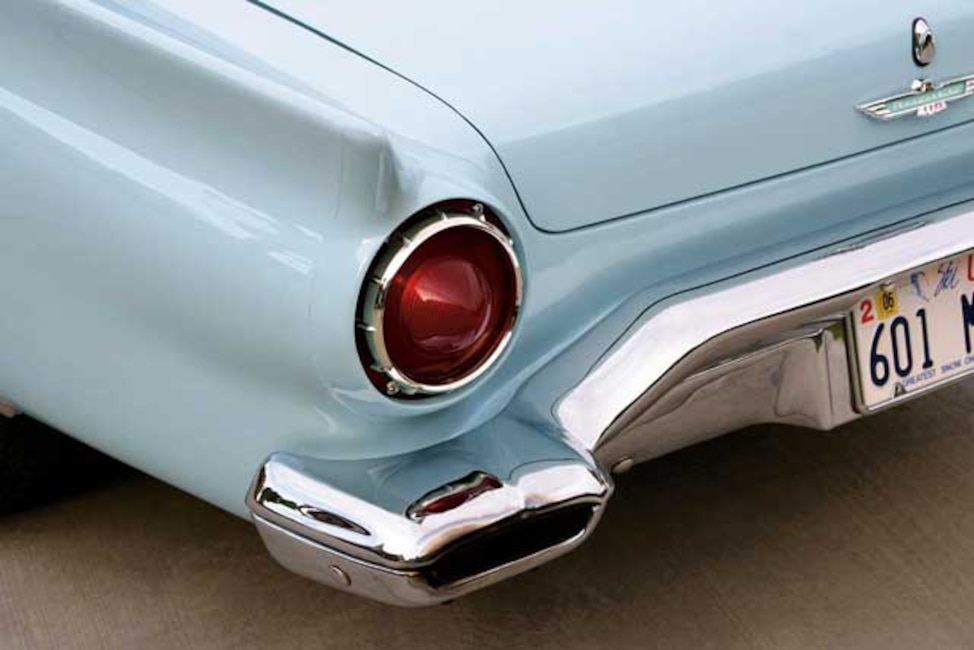 Bumper/Taillight Detail
When we said "off-the-shelf" parts, we weren't kidding. These are '57 Ford taillights. Ford incorporated Thunderbird's dual exhausts into the bumper for a subtle yet functional treatment. 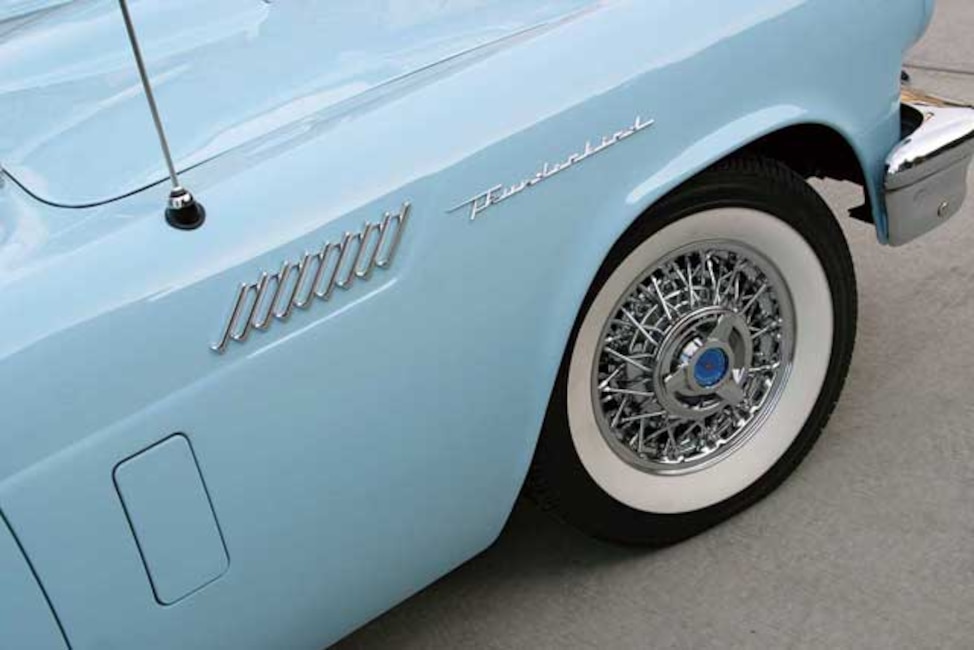 Wheel Detail
In an age of simulated everything, it's nice to see genuine Kelsey-Hayes wire wheels wrapped in Coker Classic radials. The Bryners requested the radials for safety and handling along with the correct, wide, white-sidewall tires.

We tend to compare the two-seat Corvette and Thunderbird as though they were the same, but these Detroit wondercars couldn't have been more different, and here's why. Introduced in the fall of 1952, the Chevrolet Corvette was an all-out sports car conceived for performance-minded drivers and men in midlife crisis sporting gray temples. During its first two years, Chevy's potent Blue Flame six-powered Corvette attracted its share of buyers. Because Corvette was there first, it became America's most beloved sports car. For 1955, the Corvette got a splash of salsa-Chevrolet's all-new 265ci small-block V-8-which made the car legendary.

The Ford Thunderbird was not only an answer to Corvette in 1955, but it was also a softer, more luxurious alternative people would want badly. The Thunderbird wasn't intended to be a brute sports car; it was a sport/luxury two-seat automobile with a lot of nice amenities Corvette didn't have. Thunderbird's 292ci Y-block was not a high-performance V-8, but rather a civilized engine designed for the open road with a kinder, gentler demeanor. The Y-block wasn't a radical American V-8, but instead a soft-spoken, mechanical lifter V-8 sporting the soft chatter of 16 cast rocker arms mounted on conventional shafts. At the tailpipe, Thunderbird yielded a soft bellow of eight exhaust pulses and the sweet smell of unburned hydrocarbons thanks to point-triggered ignition and an old Holley "Teapot" carburetor. In 1956, the T-bird got a larger 312ci V-8 and a pinch more power to compete with Chevrolet.

The Thunderbird's two-seat status was challenging for salesmen pushing the original darling of Dearborn, which is why the car became a larger four-place personal luxury car in 1958. Sales in 1955 reached 16,155 units. For 1956, the Thunderbird sold 16,631 units, and in 1957, some 21,380 units. In 1958, sales figures doubled, proving to Ford it made the right decision when it grew Thunderbird to four occupants.

To help spur sales and give the T-bird a more exciting image in 1957, Ford's product planners and engineers warmed up the 312ci Y-block V-8 with two sizzling options-twin four-barrel carburetion or a McCullough supercharger. In the hobby, 8V Thunderbirds are known as E-birds while supercharged versions are called "F-birds" due to their engine codes.

Jan Bryner of Sandy, Utah, has the good fortune of a terrific husband, Jay, who's crazy about her-so much so that he put her in this Starmist Blue '57 F-bird roadster for her birthday. Jay's inspiration came from her birth year-1957. The Bryners flew to Dallas to see world-renowned T-bird expert, Amos Minter. Minter's collection of Thunderbirds was overwhelming, but there was only one car for Jan. The Bryners were moved by its rare, optional McCullough supercharger, three-speed stick, and 3.89 gears. These features made it distinctive, weekend ready, and a blast for the show circuit.

Even more appealing was the car's low-mileage, original status-just 43,800 miles, with original paint and an undisturbed powertrain. When Jay drove the car, its original 312 seemed tired and ran like it. Minter's staff rebuilt the engine and then turned over the car to the Bryners. Minter also fitted the car with radial tires to improve handling and safety. Those are real Kelsey-Hayes wire wheels, by the way, factory original to this Thunderbird.

This is not a restored doorjamb; it's factory original.

According to Jan, just three or four Starmist Blue '57 Thunderbirds were built with a McCullough supercharger. What's more, only 197 total Phase II F-birds were ordered and built sporting the McCullough blower. By today's standards, these supercharged T-birds weren't much to write home about in terms of performance and speed. However, what makes these cars unique is rarity. There's nothing quite like the rush of a big finned blower to excite the senses. On a Ford showroom floor or at a Saturday night cruise in 1957, these cars were high-end rides for those with money and status. They were eye-catching chariots for Main Street just about anywhere in the rising post-war years.

We could tell you all about what the Bryners had to do to get this car to show condition, but we'd be lying to you. They bought this car in as-is condition, and aside from the Minter engine rebuild, it was in show condition.

We like the way Ford blended the Thunderbird's dual exhausts into the rear bumper for 1957-virtually invisible, yet visible. The Thunderbird takes its styling cue from the futuristic space age, and Ford did the best job at this. Of all the Detroit automakers, Ford used the most restraint, keeping jet-age/space-age nuances to a minimum-tasteful, elegant. Fin treatment is subtle. Frank Hershey, Ford stylist at the time, can be credited for the Thunderbird's unique styling. It may surprise you to know the Thunderbird was conceived and built using a lot of off-the-shelf parts to keep cost under control. It employs a Ford sedan chassis underneath. Those are big Ford drum brakes behind authentic Kelsey-Hayes wire wheels. A Ford instrument panel was borrowed from the '56 Ford parts bin; ditto for the dashpad. Lots of other shared hardware exists throughout the car.

Ford didn't build the Thunderbird with the notion it would sell a lot of them. This was a high-profit luxury car, to be sure. However, the Thunderbird was conceived to bring buyers into showrooms who would likely buy something more mainstream, like a Victoria sedan with room for a family. In short, it was dreams versus reality-people drawn to the Thunderbird who would buy a station wagon for the wife and kids. Even though Ford intended to make a lot of money on Thunderbird sales, it, too, was faced with reality. The corporation lost money on every two-seat T-bird sold, making it necessary to grow this car to four passengers in 1958 to attract more buyers.

Jan's Starmist Blue Thunderbird hasn't been a reality check for the Bryners, but more a dreamy-eyed experience these folks have waited a lifetime for. Cruising in a rare, classic Thunderbird is surreal for Jan. It's a high without drugs, and an expression of Jay's expression for the woman he married.

When Rosemary Nichols Took The Wheel Of This Dusk Rose 1957 Ford Thunderbird, It Was Pure Lust - Mustang & Fords Magazine