If not exactly widespread, at least it doesn't come as a complete shock these days to stumble across the occasional early-generation Mustang powered by a late-model modular V-8, often in DOHC form. And though seen with increasing frequency, it still must be a daunting task to successfully shoehorn a fat-headed cammer--with all its required electronic intelligence-gathering hardware and its domineering powertrain-control processor--into a 40-year-old platform. But by now there at least must be some body of knowledge accumulating on Internet forums to help those who are pondering such a new-into-old swap. Not so for our featured creation.

At first glance, you might assume that just such an engine transplant is what happened here, a supposition that is both dead wrong and initially understandable. In fact, what brothers Bob and Wayne Julian have accomplished with the Screaming Yellow fastback they call "SN65" is a far, far more complex task. This is what you might think of as an old-onto-new swap, because it involved magically morphing a '65 fastback body onto an '03 Terminator Cobra chassis.

But, of course, that's not technically accurate either because Mustangs have always been of unibody, rather than body-on-frame, construction. And if you think there's anything straightforward about merging two unibodies separated by nearly four decades of engineering timeline, then you are sadly delusional. For mere mortals, we would have to rank this task as all but impossible, especially at the level of fit and finish apparent in our photos. What made it conceivable for Bob and Wayne is first that they are partners in Julian's Collision in St. Charles, Illinois, and, second, that their shop is clearly capable of going far beyond fixing fender-benders. Even so, the project consumed upwards of 4,000 man-hours to bring to glorious fruition.

The blown DOHC 4.6L is virtually stock, save for inhaling through a custom-fabricated cold-air inlet and exhaling through a MagnaFlow 2.5-inch exhaust. On the Dynojet, it's good for 402 hp and 392 lb-ft at the wheels. Notice how nearly every ancillary bit is in its original '03 location--except for the drastically relocated strut towers needed to stretch the Cobra's wheelbase out to that of the '65 body's.

It all began with two perfectly good donor cars--a 13,000-mile, 390hp '03 Cobra and a solid '65 fastback. Oh, and what must have been one heck of a reciprocating saw, because the first physical task was to sever the body portion off the Cobra and the rolling portion off the '65. We've conveniently skipped the preliminary mental processes here, but be assured the actual metal surgery was thoroughly preceded by much rumination and calculation--at least enough for the brothers to conclude that the scheme ultimately had at least some likelihood of feasibility. Even so, it was a high-stakes gamble.

Let's look at just a few of the potential pitfalls. First, the Terminator has a wheelbase that is nearly 7 inches shorter than the '65's, and the brothers Julian had no intention of having their finished product look like an altered-wheelbase Funny Car. So the boys had to devise a method of extending the Cobra's wheelbase by over half a foot. Still on the topic of dimensions, the treadwidth of a '65 Mustang is 56 inches; by 2003, this had widened to 60.2 inches front, 60.6 rear, with much more generous rubber. This necessitated fender flares, ones that wouldn't look tacked on, or tacky, for that matter. In the end, shorter Fox-style lower control arms from Maximum Motorsports were also required to narrow the front track to an acceptable degree. And in one other dimensional discrepancy, the overall width of the Terminator exceeds a '65's by nearly 5 inches. This created a big squeeze when the guys decided to use the Cobra's factory dash/instrument cluster--it was just too wide, and required delicate cosmetic surgery to fit and blend perfectly with the modified '65 inner door panels. As you can see, these issues were all overcome with seamless panache.

A Terminator dash was carefully trimmed to work with reupholstered '65 door panels. All of the Cobra's modern conveniences still function on the SN65. Check out the contrast between the electric door and window switches and the first-generation chromed door handle.

From the beginning, the brothers were adamant that the end result should have all the high-tech functionality and conveniences of a factory Terminator Cobra, from air conditioning to traction control to antilock brakes to cruise control to power windows and locks--you get the idea. This thirst for function was one of the reasons they ultimately decided to go with the Terminator dash rather than the modified '65 dash they had originally planned. Such willingness to be adaptable as issues popped up was essential since this was such a trailblazing project. Despite that all their calculations had suggested this automotive version of the Vulcan mind meld was feasible, truth be told, even as they began chopping cars apart, there were still some lingering doubts.

Doubts gradually faded as the project slowly progressed over a 24-month span. We'd need a coffee table-size book to describe the challenges they encountered and the creative solutions they responded with, but our Under Construction sidebar illustrates a few of the major examples, and Bob Julian describes what he refers to as one of the "little" issues.

"We wanted to use the '03 Cobra door locks on the car so that the same key would open the doors as well as the trunk and also start the car. The problem we encountered was that the '65 lock mechanism required a key that rotated up 45 degrees and stayed there. The '03 lock rotated up 45 degrees and then had to be rotated down to remove the key. Common sense would tell you that the '03 lock would not work with the '65 mechanicals. I am sorry, but after everything we had been through to make sure that every single '03 electrical and mechanical device would function as it came from the factory, we were not going to let a simple lock beat us. After a little thought, we came up with a simple sliding-shaft mechanism [in the lock linkage] that allowed you to turn the key to unlock (or lock) the door and then return it to its center position to remove the key."

In the end, what thundered out the doors of Julian's Collision was clearly a world-class example of craftsmanship and attention to detail. And that's not just our opinion; one of SN65's first show outings was at the '06 Detroit Autorama--showplace of some of the finest custom automotive creations on the planet. At this prestigious gathering, the SN65 won the Outstanding Engineered award, no mean feat, as a judge explained: "Your Mustang beat out all those handcrafted, built-from-scratch, million-dollar-plus show cars for this award." All this with the car placed in the same category as the high-dollar Ridler-contending custom hot rods.

What looks like a slammed '65 fastback but accelerates, brakes, and handles like no first-generation 'Stang could even imagine? Bob and Wayne Julian's SN65--in simple terms, a '65 body wrapping '03 Cobra technology.

Shows are fine, but this ain't no trailer queen. Despite its obvious fiscal value, the SN65 hits the streets as often as Chicagoland weather permits, and the talented brothers are even planning on competing in Hot Rod's "Open Track Smackdown" event. In other words, it performs as well as it looks.

And now, please allow your scribe some personal observations. You have to experience the SN65 in person to appreciate the surreal melding of 1965 physique and 2003 technology. Facing forward while seated in the Recaro-equipped cabin, the dash view is all Terminator, but turn around and you're looking out that unmistakable and panoramic '65 fastback backlight. Underhood is the supercharged might of the Cobra--with all factory peripherals, including the characteristic hydro-boost brake/power steering system right where you expect to see them--but it is surrounded by a '65 front clip that looks like the factory bolted it there. Likewise, The Cobra's independent rear suspension is tucked up high and practically invisible behind the rear valance, like the SN65 had rolled off the production line with IRS. Overall, the best descriptor that comes to mind of this intergenerational marriage is "seamless." This thing's a work of art in metal. 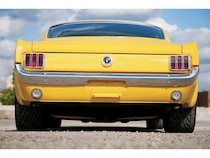 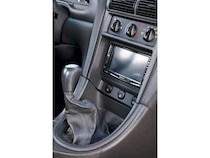 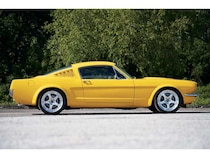 Skilled fabricators fascinate us with their ability to think in three dimensions and solve mechanical dilemmas most auto journalists couldn't sort out in a lifetime. Viewing these under-construction photos and perusing their captions should help you comprehend the enormity of the SN65 project, and why it consumed a couple years of Bob and Wayne Julian's lives.