1963 Ford Falcon Futura Sedan - All She Needs Is Six

Enthusiasts who travel a different path are inspiring, because it takes a lot of guts to be different. These folks inspire us with their courage. Courageous are the folks who stuff double overhead-cam Ford V-8s in classic Mustangs. Bold are those who manage to fit huge engines where they weren't designed to fit. Gutsy are those who try something no one has ever tried before, like a four-cylinder Ford diesel-powered '65 Mustang hardtop--actually done by Jim Gorman in Mansfield, Ohio, 25 years ago.

Drag racer Kelly McLearran of Tucson, Arizona, is equally as gutsy for even more reasons. She and her husband, Will, decided to build a turbocharged six-cylinder Falcon sedan and wound up blowing the doors off a sizable percentage of their V-8 counterparts with 12-second time slips, currently 12.49 seconds at 109 mph.

You might be inclined to ask why. Why a six-cylinder compact sedan instead of a V-8 Mustang? Kelly's inspiration for something different originated December 7, 2001, when she was diagnosed with breast cancer at the age of 30. At this age, breast cancer is one of the last things a woman expects to hear from a physician during a routine checkup. Kelly, faced with her greatest challenge ever, chose to go after both the cancer and a new-found desire to race.

Kelly caught her go-fast passion from Will while watching him drag race late-model Mustangs, but her efforts took on a different meaning. She was drag racing to help raise breast cancer awareness. Kelly coined the phrase "Quarter-Mile For A Cure," and her proceeds have gone to support breast cancer research ever since. 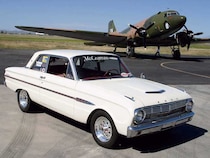 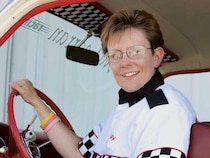 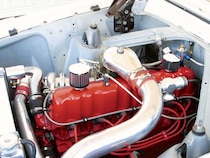 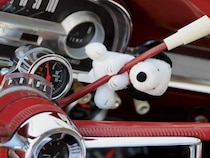 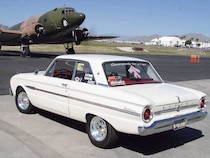 When Kelly and Will were looking for a drag racer, they didn't expect to find a low-mileage original '63 Falcon Futura two-door sedan with the original factory paint from Mt. Sterling, Illinois. If taking a low-mileage original and turning it into a drag racer disturbs you, take heart. The McLearrans purchased the car from someone who was already in the process of building a drag racer for the V-Stock Eliminator class using the original 170ci six. The first time Kelly and her husband took this car drag racing, it clocked in a whopping 20.52 seconds at 65 mph on the quarter-mile, not exactly enough to detach the retinas, but it was a start.

For the inline sixes, the McLearrans used the mindset of Will's experience with turbocharging small-block Fords. Because the 170 lacked sufficient bottom-end support and displacement, it just didn't make sense to go forced-induction with the car's original iron. Will started with a bare 250ci block, which employs a greater stroke than the 170 or 200 sixes. Will and Kelly then laid out a plan for turbocharging. They went to the Ford Six Performance Parts Web site for ideas and components and were set up with the right camshaft and valvetrain that included roller rockers for improved top-end performance.

Down under, their engine remained mostly stock, including cast pistons, factory rods, and a nodular-iron crank, all strong testimony to the integrity of Ford's once-mainstream six. Because turbocharging can be deadly for an engine without adequate fuel delivery and proper spark timing, Will opted for a high-output fuel pump with a 1/2-inch line, a fuel-pressure regulator, 350-cfm Holley two-barrel carburetion, a Ford Duraspark distributor curved for turbocharging, Mallory boost control, and MSD ignition parts for precise engine control. Will then fabricated a custom turbo system designed to work hand-in-hand with the tall-deck 250ci six. Check out the ceramic-coated plumbing which keeps extreme heat inside the system where it belongs. That's a Garrett AiResearch 58mm turbo yielding six pounds of boost.

Getting a classic Falcon to crack a 12-second quarter-mile isn't for the weak of heart, but this is Kelly McLearran we're talking about. Building a 12-second drag racer takes a lot of trial and error beyond the engine itself, but Kelly is used to that and accustomed to meeting expectations. Much of their success is rooted in gearing, component selection, and tuning technique. At press time, the McLearrans are running a tricked-out C4 transmission from Performance Automatic with a Hughes 3,500-rpm stall converter.

Drag racers rely not only on power output to achieve success, but dialing in just the right gearing and transmission-shift tuning. Right now, they have a 9-inch Ford with 3.89 gears and 33-spline Moser axles. This combination of parts has put them at 12.49. Their next step will be a Currie Alumin8 aluminum 8-inch third member to reduce weight and parasitic drag. Underhood, they're planning on updating to the anticipated way-cool cross-flow cylinder head from Ford Six Performance Parts.

Inside, Kelly's office is all business and includes most of the Falcon's original appointments. Her desk includes an Auto Meter tachometer with shift light, boost gauge, and vital engine instruments.

Kelly credits her family and a close circle of friends for both her personal success and the Falcon's. Call it a terrific support system we all need in life. Kelly McLearran is a remarkably rare human being who took a negative experience and spun it 180-degrees to positive, not only succeeding as an ambitious drag racer but as someone who has successfully beaten cancer.

If you would like to know more about breast cancer research and how you can help Kelly help others, please e-mail her at kellym@proactivept.com.