When we walked up to Joe Visslailli's '65 Mustang fastback at Carlisle, Pennsylvania, a year ago, we admit to the shock of seeing a big-block. At first glance, it didn't appear to be a big-block ground-pounder, like a Cobra Jet Mach 1 or Boss 429. First-generation Mustangs are small-block real estate-a close underhood environment where low-displacement iron or high-displacement strokers normally live. But when Joe raises the hood of this Azure Blue fastback, it is ironclad 385-series fat-block from fender to fender.

To get big-block power into the nimble Mustang fastback, Joe had to widen the Mustang's engine room to accommodate the displacement. He removed the shock towers and pinned a Mustang II suspension underneath from Rod & Custom Motorsports. "I found Willie Osborn at Rod & Custom Motorsports a pleasure to work with and extremely helpful," Joe tells us. They made the engine bay wide enough to accommodate a 6V-71 Detroit diesel, except Joe was more satisfied with a gasoline-fed, torque-twisty, Ford big-block displacing 466 ci. think how much displacement he could have shoehorned into this roomy engine block-as high as 560 ci with a serious stroker kit, but for Joe, something like 560 ci seemed like an unfair advantage.

When Joe was planning his big-block Mustang, he knew what he needed from the engine. He wanted a solid torque curve across a modest and respectable rpm range. Ford's 429/460ci big-blocks do that with ease in box-stock condition. When you huff them up with aftermarket performance parts and a common sense build technique, you get grunt coming right out of the hole. 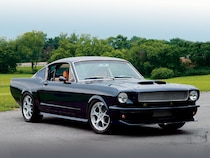 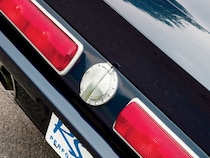 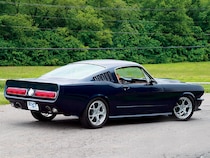 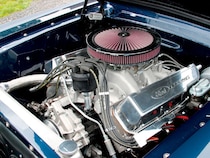 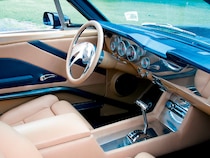 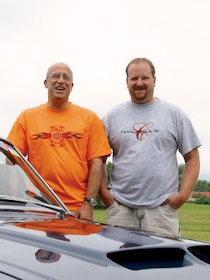 Because Russ and Joe built quite the big-block powerhouse, they needed a C6 transmission that would channel the torque without fail. Sonnax provided the special "R" servo needed to get the power to the 9-inch Versailles rearend with 3.55 gears. Joe has mixed feelings about his Versailles rearend. It hasn't performed up to par, which leaves him wondering what to do next.

What disturbed Joe most about his Mustang rocket ship was gas mileage. Just 10 miles to a gallon of gas the car's first time out. With fuel prices so high these days, it is easy to see why this captured Joe's attention at the pump.

Joe admits to feeling irritation with people who think his fastback is an Eleanor clone, which it is not. Joe and Russ' imaginations went to work on this car long before anyone ever heard of the Gone In 60 Seconds remake. These gentlemen set out to build something of a big-block '65 Mustang street rod that fits right in with the rock and roll oldies music of the '60s. When Joe fires this puppy up, you can hear the Rolling Stones, Jimmie Hendricks, The Beatles, Janice Joplin, and The Doors.

This ride just gets on down the highway, looking for adventure anywhere Joe can find it. He boldly takes his '60s musclecar where a lot of Mustang enthusiasts dare not go: rod runs and street rod events where the newest rides are from the '50s. This might get a lot of people shown the curb, but not Joe. Hot rod enthusiasts have welcomed Joe and ask him a lot of questions about his Mustang. Died-in-the-wool hot rodders are beginning to embrace '60s Fords and Mercurys, looking at what can be done with these bold statements from our favorite decade.

So what makes Joe's fastback acceptable to hardcore street rodders? It has to be the street rodding nuances that exist throughout the car. Take a look inside at the Toyota bucket seats in custom saddle tan leather. That's a Billet Specialties steering wheel. The rest of the interior is all custom, just like a street rod because, by golly, it is a street rod for the '60s. We like the custom-made console, a one-of-a-kind, made especially for a Mustang unique in scope. Did you notice the subtle rollbar that doesn't get in the way, but protects the occupants nicely? Custom door panels follow the natural lines of a first-generation Mustang door. Those kick panels are available from Custom Autosound. If you're fond of Joe's interior, pass your compliments along to Bob Fuller of Fullers Auto Interiors who did the work. Auto Meter instrumentation jibes nicely with the custom-fabricated dashboard. This is actually a factory Mustang dashboard with a whole lot of customizing. In the console is an Alpine 9815 head unit with 500-watts of JL Audio equipment throughout the car.

Outside, Russ and Joe tackled the body using Diamont urethane basecoat/clearcoat in Azure Blue. That's a '67 Shelby-style fiberglass hood from Mustangs Plus. Side scoops are something you won't find on anyone's web site. They are hand fabricated and exclusive to this Mustang. Check out the front valance and chin spoiler, and Shelby taillights with a '71-'73 Mustang pop-open gas cap. We like the way Joe and Russ shot-gunned the dual-exhaust system through the factory Mustang rear valance. You'll find ARE 17x7.5-inch Spago wheels wrapped in Nitto and Pirelli rubber and KYB gas shocks that dampen the action at all four corners.

Joe tells us he likes the clean, uncluttered look of his Mustang street rod. He has owned this car since 1985 when he snapped it up at Carlisle. At that time, it was an Ivy Green Metallic 289 automatic car without much of a claim to fame. It wasn't until the turn of the new century that he decided to thrust his fastback into the new age of Restomod. Joe had no plans for a big-block when he rattled Russ' cage. It occurred to him that almost all first-generation Mustangs had garden-variety small-blocks and even Modular V-8s. Neither appealed to Joe. With all of that room created by the Rod & Custom Motorsports front end, it seemed wasteful to go with anything less than a brute big-block, which led him and Russ to the ultimate shock of a big-block.