A Super Duty that hauls ass.

Steve Temple
February 23, 2007
A modern-day muscle truck meets old-school muscle on a back highway in California. Hulst Customs is responsible for building the '07 F-350 dualie for dual purposes-towing and performance.

If you want to see how far we've come with Ford performance trucks, just look back a few years to the so-called "golden era" of musclecars. You'll discover this remarkable fact: A modern truck weighing four times as much and powered by a smaller, turbocharged diesel can be just as quick on the dragstrip as some of those famous musclecars from the '60s.

Taking a look at one car in particular, Blue Oval enthusiasts are already familiar with the tale of that wily chicken farmer and racecar driver from Texas named Carroll Shelby who wrangled a deal between Ford Motor Company and AC Cars Shelby, a self-described "guano distributor," convinced Ford to give him a then-new 260-cube V-8, claiming he had secured the U.S. rights to build AC Cars' roadster. At the same time-virtually out of the other side of his mouth-he told the Brits he had a new engine ready to be installed in their chassis. While neither assertion was technically true at the time, Shelby forged ahead anyway and managed to create what is arguably one of the most significant sports cars of the last century: the Shelby Cobra.

Moving ahead to the 21st century, while trucks now outsell cars by a large margin, musclecars are enjoying a resurgence in popularity. As an offshoot of these two trends, there's a fast-growing interest in diesel-truck performance.

Given the emergence of the diesel-powered "muscle truck," it's altogether fitting that Hulst Customs' '07 F-350 Super Duty Super Crew dualie pays tribute to Shelby's reptilian sports car. But the Striker, as Hulst calls it, is not just a styling statement. As noted at the outset, a properly equipped diesel pickup can best the dragstrip times of some '60s-era musclecars (running on a road course is another matter, of course). It's an astounding fact considering a Super Duty tips the scales at nearly 4 tons-it far outweighs even the heaviest musclecars of yesteryear. Couple that to the fact that today's diesel engines are way smaller than the big-blocks of the foregone generation of factory hot rods yet still make more power using diesel fuel instead of gasoline, and it's no wonder diesel power dominates in the Super Duty class.

Hulst Customs' inspiration for this performance pickup project started with a Cobra replica Jason Hulst built with his father, Paul, at Dad's street-rod shop, Hulst Customs. The color scheme was similar to the one shown here, and under the hood was a gasoline-fueled, Ford 351W V-8.

Having built a number of other Ford project vehicles, the Hulst father-and-son team felt comfortable tapping into the Ford Racing heritage to create a high-performance F-350. Not only does it have the aggressive skunk stripe and side pipes of a Cobra, but it also has the stones to back it up.

The intense, three-month buildup included extensive massaging on the bodywork, suspension, and engine bay. Jason Hulst crafted the hoodscoop and redesigned the front fascia, which is shaped from foam and fiberglass. (An aftermarket body-conversion kit is in the works.) Clearance lights on the roof were shaped and cast in-house as well. 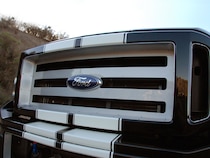 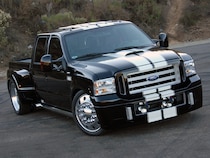 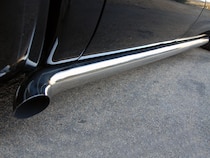 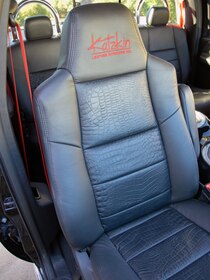 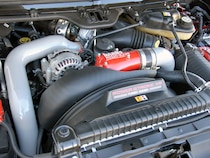 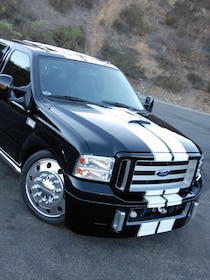 The nearly 4-ton pickup truck rolls on 24-inch American Force wheels with Pirelli Scorpion tires. Wheels have been upgraded from the standard 8-lug arrangement to the big-rig-like 10-lug setup.

Paul Hulst fabricated an aluminum surround insert and the custom grille, which is recessed 3 inches to give it the flavor of the Cobra's large, oval opening. The nose treatment also features Cobra-style cooling fans. (Incidentally, the original Shelby reportedly used refrigerator fans to keep the big-block 427 from boiling over.) He also tubbed the rearend and crafted the scoops in the rear fenders.

Andy Peterman of Hulst Customs handmade the side pipes and modified the suspension to fit the oversized Pirelli P Zero Scorpion tires, which are mounted on 24-inch American Force big-rig wheels with 8- to 10-lug adaptors. (In marked contrast to the original Cobra's 15-inch Halibrands with knock-off spinners and Goodyear Blue Dots.) The DJM suspension features Dream Beams (dropped I-beams) up front and a flip kit in the rear. This setup lowers the nose 8 inches and the back end by 10 inches. Extensive modifications were required on the wheels, frame, and suspension mounts in order to accomplish this aspect of the buildup.

The bed was modified with a new aluminum-panel insert, as well as a custom aluminum toolbox with a lid held down by hood pins in keeping with the racecar theme. Also in the bed is a Fifth Wheel hitch from Curt Manufacturing with a new hemispherical design.

Other custom touches include bedrail top caps shaped from steel, and the tailgate and rear bumpers were smoothed and painted. The Ford black and Wimbledon White stripe is Glasurit sprayed by Paul Hulst.

OK, so it has the skin of a Cobra, but what about the fangs and venom? That's where Banks Power stepped in with a Big Hoss bundle, striking with an extra 138 hp and 231 lb-ft of torque. Peterman modified the Banks exhaust to route into the functional side pipes. A Power PDA mounted on the dash not only provides key data readouts but also allows Hulst to fine-tune the output to precise performance levels, so this reptilian rig can be dialed up to either tow a Cobra to the track or make a lightning-quick strike on the dragstrip. Think of it as the truck equivalent of having your cake and eating it, too.

When you're not enjoying the music from the side pipes, a Sony Xplod sound system, designed and wired by Eddie Blay, boasts three 10-inch subwoofers mounted in a custom, fiberglass center console fabricated by Hulst Customs. Midrange frequencies emanate from four 6x9 speakers. In the rear headrests are Sony monitors, and the head unit has a DVD monitor with a touch screen. The Sony Xplod amplifiers have an innovative mounting in the leather-upholstered headliner. Dynamat was used throughout the interior for sound deadening and heat dissipation.

Looking back at that first Cobra built by Shelby in the '60s, it's doubtful he ever thought his roadster would one day inspire a truck build. But the Striker has just the right setup for a Super Duty that hauls ass.