Livernois Motorsports Built This Shelby GT500 With Over 1,000 Rwhp. 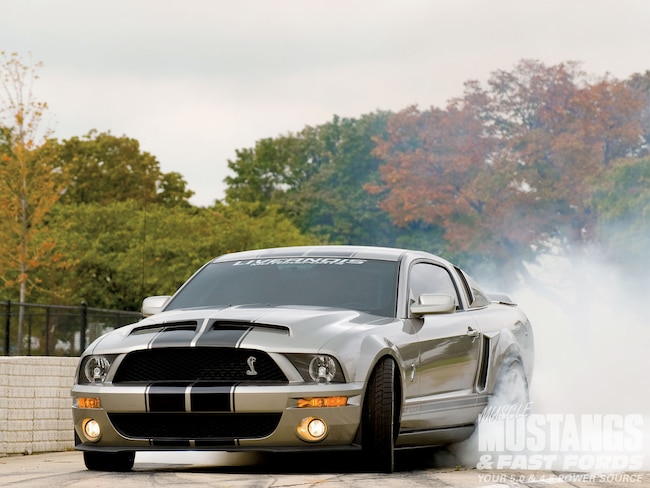 You have to be very careful when Rick LeBlanc walks you through Livernois Motorsports' shop.

Bob Zdravkovski from Milford, Michigan, realized this soon after driving a brand-new '09 Shelby GT500 (with a fresh temporary license in the rear window) over to Livernois with and only 100 miles on the clock.

Bob wanted a four-digit dyno number from the rear wheels of his beautiful new Vapor Silver Shelby GT500. He knew what Livernois had to do to get over 800 rear-wheel-horsepower from the previous Shelby project-more cubes via the Livernois custom big-bore sleeves, and the larger 4.0-liter Whipple blower were the two main differences in Bob's Shelby GT1000R. Horsepower is always a moving target.

These new Shelbys are amazing from the factory. There is no doubt that Ford knew tuners were going to go wild-no other manufacturer has ever offered a four-valve-per-cylinder, dual-overhead-cam, supercharged V-8 engine with the ability to extract such performance numbers.

Livernois pulled the engine from Bob's Shelby to get started, and also installed a 10-point cage and BMR rear suspension pieces. Meanwhile, the guys in the engine department were doing their magic.

First, the Shelby's block was swapped for an FRPP wet-sump aluminum block with Livernois custom 3.705 big-bore sleeves, punching it out to 358 cubes. Livernois performed the usual decking and bore-honing. Once the block prep was done, Livernois installed custom 9.3:1 forged pistons and Carrillo Pro H-beam rods on the Shelby's stock crank. Then Livernois ported Bob's stock Shelby heads to Stage III specs with its five-axis CNC. The stock valves were ground and back-cut to work better under the higher boost levels provided by the 4.0-liter Whipple twin-screw supercharger. Livernois used its Newen CNC-valve machine to give these heads a killer multi-angle valve job.

According to LeBlanc, the biggest trick to maintaining driveability is in the cams and tuning. Livernois learned a lot from using Ford's GT supercar cams in previous engine builds. The Livernois 1C cams are designed to work even better than the GT cams under high boost, and still drive like a stock Shelby the rest of the time.

Keeping the fuel pressure high enough to make 1,006 rwhp requires sending large amounts of fuel to the injectors. This vital issue has been handled by the installation of Fore Precision Works triple-fuel-pump hat and Ford GT supercar fuel pumps. The pumps work with the Fore fuel rails, Ford Racing's 80-lb/hr injectors, and Fore fuel-pressure regulator to make sure there is always enough fuel to blend with the massive amounts of air going through the Ford Racing Performance Parts Cobra Jet mass air meter and Whipple Big Mouth throttle body.

The team at Livernois slid the beast back into Bob's Shelby, and put the finishing touches on the driveline and rest of the car.The underside has been treated to Kook's 17/8-inch long-tubes with a custom 3-inch X-style midpipe feeding Magnaflow mufflers with 3-inch exhaust pipes. The Canton oil pan increases the volume and looks really cool. The bellhousing contains a Centerforce DFX Clutch designed to clamp all the power and send it back through the stock six-speed. Livernois uses a Dynatech aluminum driveshaft to make the connection back to the 3.73 gears and Detroit Locker in the Shelby's 8.8 rearend.

With the drivetrain handled, Livernois put on a set of 20-inch Shelby Super Snake wheels and Nitto NT555 tires. The QA1 adjustable coilovers and the BMR rear springs with QA1 shocks lower the Vapor Silver Shelby onto the wheels. The Super Snake wheels, along with the quarter-window scoops and Suncoast KR-style hood, provide a wicked, yet understated look.

The interior of Bob's Shelby has retained all the creature comforts that it had from the factory . The door bars on the rollcage swing out and can be removed for easy access. You can drive it to the dragstrip and run 9.93 at 142 mph, spinning the tires and letting off early on your 20s, and then pick up your wife and go out to dinner.

The Shelby makes over 800 lb-ft of torque at only 2,500 rpm and peaks at 916 lb-ft. Rick LeBlanc has been doing all the test driving on Bob's car so far, and he is used to driving cars with crazy amounts of power. Bob is going to have lots of fun discovering the performance envelope of this amazing Shelby GT1000R.

Of course, Bob's Shelby has escalated the Shelby arms race and we've heard the owner of the GT800R has already had a consultation with Dan Millen of Livernois. These guys are looking for total Shelby domination! The Livernois Shelby arms race is on! 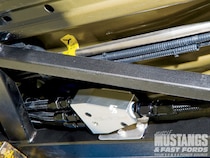 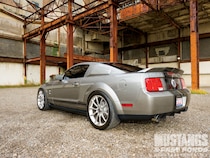 First Drive! Behind the wheel of Ford Performance’s most balanced non-R Mustang yet — the 2019 Shelby GT350

We get behind the wheel of the freshened 2019 Shelby GT350, which benefits from a host of aero, calibration, chassis, and suspension upgrades.

Readers share the story and photos of their muscle mustangs or other fast fords including Steve Seely and his 2013 Shelby GT500.