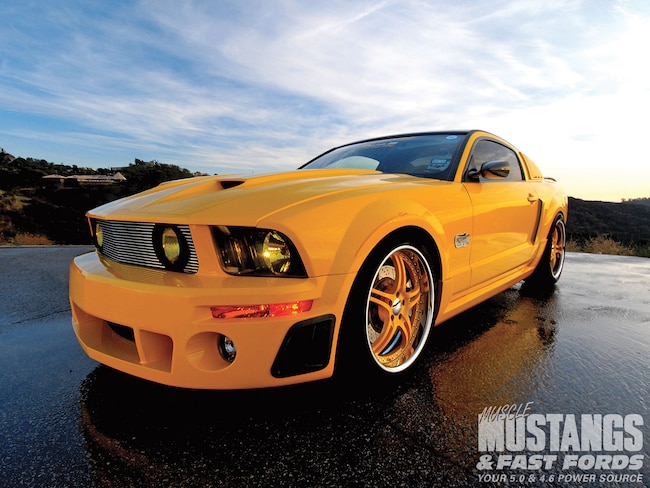 "In the late '70s, I left high school to enlist in the U.S. Marine Corp. It was the only time my mother ever slapped my face," explains Mouse Prosen of Denton, Texas. "After two weeks, she finally started talking to me again and asked me if I was sure this was what I wanted to do. I knew it was my calling and duty to serve America."

By 1979, Mouse was out of basic training and assigned to a special tactical team. While the team was out doing maneuvers (which he is not willing to talk about), his Huey gunship was shot down. After medical evacuation from Guantanamo, Cuba, he spent the next nine months in Balboa Naval Medical Center where he underwent extensive treatment, including multiple surgeries, to start his lengthy road to recovery.

"The doctors didn't think I would ever walk again," Mouse stated. "But I can take a beating and keep on ticking." Mouse suffered extensive injuries to both of his legs, a shattered right shoulder, a broken neck, two broken wrists, and severe internal injuries among other wounds. Over the next 31 years, Mouse had 18 surgeries, the most recent in September of 2008.

After enduring so much, it can be difficult to keep a positive outlook on life. Finding a way to deal with hardship is important, and Mouse found strength by focusing his attention on something positive-his Screaming Yellow '06 Mustang GT, named Saphira.

"I fell in love with Fords when I was 6 years old," Mouse tells us. "My friend Guy had an original '64 427 Galaxy 500 and that's all it took." Today, Mouse is the proud owner of this Screaming Yellow '06 GT, and since its purchase in February of 2006, he has made significant changes to the looks and performance.

The heart and soul of this showstopper is a 302ci stroker mill from Granatelli-Duttweiler. The bores are filled with coated Manley pistons and forged H-beam Manley rods, which are set into motion by a forged crank from Kellogg Performance Crankshafts. To help the rotating assembly spin freely, a crank scraper and windage tray keep the counterweights from dredging up too much oil. The stock oil pump and an 8-quart pan from Canton were installed to complete the short-block. Granatelli-spec camshafts were added to control the valvetrain inside the Stage 3 CNC-ported cylinder heads (also from Granatelli) that top off the block. The finished combination produced a boost-friendly, 9.0:1 compression ratio.

Mouse wanted his Pony to have more than just looks, so a Paxton Novi 2200 centrifugal supercharger is employed to feed air to the hungry powerplant. With boost comes heat, so an air-to-air intercooler reduces the intake charge temperature. Once the air/fuel mixture is delivered, spent exhaust gasses escape via a set of Granatelli Motor Sports (GMS) long-tube headers, X-style mid-pipe, and 3-inch mufflers, which gives this GT an impressive growl. The stock computer program is tuned with SCT custom tuning by Lonestar Performance in Addison, Texas. Mouse's S197 spun the rollers to a healthy 720 rwhp.

Getting 700-plus ponies to the ground can be a struggle, so Mouse's GT has a Fidanza HD clutch to transfer power to the factory five-speed gearbox, which uses an MGW shifter for gear selection. Power and torque is transferred to the rearend through a 4-inch one-piece driveshaft from The Axle Exchange. A set of 3.55 gears are housed in the 8.8-inch rearend, and the stock axles turn the one-off, color-matched Liquid Metal wheels, which are wrapped in Pirelli rubber. The rear rolling stock checks in at 20x10 inches, while the fronts are a narrower 20x9, also wrapped in Pirelli rubber.

The suspension upgrades include a slew of components designed to increase cornering ability. The shocks and struts, springs, upper and lower controls arms, and sway bars have all be swapped for GMS pieces. Four-piston Baer brakes sit up front, with stock calipers and Baer rotors in the rear, giving Mouse the ability to bring the good times to a halt quickly.

Being a car-show buff, Mouse has paid just as much attention to the cosmetic details as he has to performance, adding bling wherever he could. The exterior has been upgraded with a Roush front bumper, side skirts, and quarter-window louvers to make this GT look more aggressive. A Cervini's Stalker hood, Agent 47 side mirrors, and some slick pinstriping from James Crawford finish off the exterior.

The driver's compartment sports custom yellow-leather seats, door panels, and a shifter boot to tie the body color to the interior. The dash is covered in custom yellow carbon fiber, with Auto Meter gauges in Roush vent pods so Mouse can keep an eye on boost and oil pressure. All of the stock control knobs have given way to billet replacements, while custom sill plates and embroidered headrests give the interior a personal touch.

As a finishing touch to this rolling showpiece, Mouse has amassed a collection of autographs from some of the biggest names in the Mustang world, including Jack Roush Sr. and Jr., Chip Foose, and Carroll Shelby, just to name a few.

Proud of his creation, Mouse and his wife, Alena, have seen much of the country traveling to shows and events. The couple has been to Texas, Oklahoma, Nevada, California, and Florida, among other places, all in the name of showing off their slick S197. Mouse's Pony was even part of the 2009 SEMA show, on display in the Granatelli Motor Sport's booth.

This year they plan on hitting new shows in the Carolinas, and they may travel to Canada to showcase this labor of love. In addition, Mouse and Alena started a car show promotion company, FAT Cars (Friends And Their Cars), to bring friends and cars together-because that's what its all about.

Over three years, Mouse and Alena have won numerous trophies in multiple show categories, with over 30 best in show awards. After many years on a long road to recovery, Mouse still finds strength in his '06 GT.