With Three-Valve Power, Scott Springer's '79 Fairmont Is The Perfect Mix Of Old And New. 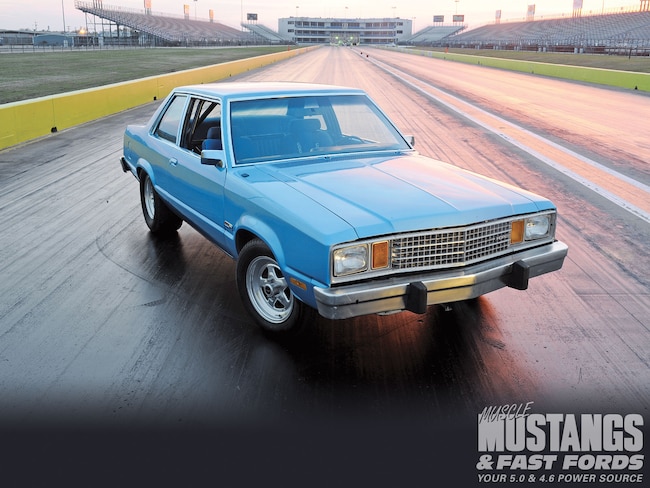 The year was 1979. Jimmy Carter was president, the United States was experiencing its second energy crisis in a decade, and Ford was launching a new Mustang platform known as the Fox-body. Just one year earlier, Ford introduced the Fairmont (and Mercury Zephyr) on the same Fox platform.

Though short-lived, the Fairmont would kick off the Fox platform with a lightweight unibody design; suitability of 4-, 6-, and 8-cylinder engines; durability; and affordability. The Fairmont paved the way for a pack of other Fox-body vehicles, including the Mustang, Capri, LTD, Granada, and Thunderbird. Even Bob Glidden drove one in NHRA Pro Stock competition.

Little did anyone know at the time that the Fairmont and other Fox-body vehicles would be hot-rodded decades later. Many of these cars have been crushed or parted out, while many more just rotted away. Once regarded as ugly, plain, or just too big, the Fairmont has been somewhat overlooked.

Scott Springer of China Spring, Texas, became interested in cars as a young kid thanks to his parents. Aa a Fox fan, he was well aware of the potential of the light and cheap Fairmont. He has owned "literally hundreds of Fox-body Mustangs," he tells us, some even before he could drive. In early 2008, when he was considering a new and unique project vehicle, the funky Fairmont topped the list.

Scott purchased a '78 Fairmont wagon locally and made plans to drop in a Windsor-based engine. "When you have a Fairmont, you have to have a parts car," Scott tells us. So he found a '79 two-door sedan on Craigs list.com for $200 and paid the seller $150 to deliver it. When it arrived, it was in better shape than the wagon. "I've always liked the box-top two-doors better than the Futura two-doors," Scott says.

Scott has been employed with Latemodel Restoration Supply (LRS) since 2002 and is now vice president of sales and marketing. Intending to use LRS and its Fox-body restoration products, Scott and his son, Christopher, began stripping the Ford for a complete rebuild. Empty shell in tow, he headed to Phillipe's Body Shop in Mosheim, Texas.

"Phillipe (whose surname is either unknown or confidential) painted the car in an old chicken coop with a makeshift paint booth," Scott tells us. "But he always does a good job, and his paint jobs turn out amazing." Scott kept the original light blue metallic color but chose not to replace the vinyl top.

With the freshly painted body back in his garage, Scott began building a Windsor engine to motivate the beast. "I wanted something that could make enough power to be fun, but also wanted it to be very streetable," says Scott. Meanwhile, Brad Taylor, the advertising manager at LRS, suggested the new FRPP Hot Rod Three-Valve crate engine with the harness and control pack. Not expecting much, Scott casually contacted Wayne Geoffrey of Ford Racing about his Three-Valve Fairmont project. To Scott's surprise, Geoffrey and Ford Racing jumped on board, and in short term, a FRPP Hot Rod Three-Valve crate engine (PN M-6007-A463NA) was on the way to Texas. The plan was for Scott to use the new wiring and installation kit (PN M-6017-463V) and document the entire install on Latemodel Restoration Supply's website (www.latemodelrestoration.com) as a model for other LRS/FRPP customers. Scott obliged and so began a five-part series of the build.

The drivetrain installation took place at Scott's garage, but he wasn't without help. LRS employees Brad Taylor, Scotty Grimes, Jonathan McDonald, Mike Linley, and LRS founder and president Shannon Guderian pitched in. The crew used free time on weekends and evenings to work on the project.

Though the engine takes center stage, it doesn't act alone. A RAM Powergrip HD clutch transfers power to a Tremec TKO 600 five-speed. Since the wheelbase is 5 inches longer than a Fox Mustang, Scott had a custom aluminum driveshaft made to connect the transmission to the 8.8-inch rearend. The 8.8 now houses 28-spline, five-lug axles by Yukon Gear & Axle and 4.30 gears.

In the steering and suspension departments, Scott utilized his resources at LRS and took advantage of the many interchangeable parts available for his Fairmont. He used parts manufactured for Mustangs, like a Flaming River manual steering rack, and Lakewood 90/10 struts and 130-pound coilovers up front; and Maximum Motorsports caster/camber plates, tubular uppers and lowers, and Lakewood 50/50 shocks in the rear.

To help balance performance and aesthetics, the Fairmont rolls on 15-inch Weld Prostars wrapped in 275mm BFGoodrich drag radials out back, with skinny 165mm rubber up front. Stock front brakes from a '91 5.0L Mustang with a five-lug conversion up front and Fairmont wagon drums in the back provide plenty of stopping power for the 2,900-pound Fox.

Surprisingly, the interior was in good enough condition to be left "as is." Scott did, however, swap the front bench seat for blue buckets out of an '88 LX. He also installed an S&W eight-point cage, Corbeau five-point harnesses, and a Raptor shift light.

Though it may be larger than a Fox Mustang, Scott Springer's '79 Fairmont is no lead sled. It has blasted down the 1,320 in 12.22 seconds at 113 mph. No boost, no juice. And it gets 20 mpg. With a tune by Mike Wilson of Dallas, Texas, Scott's Fairmont spun the rollers on a Dynojet chassis dyno, producing 325 rwhp and 314 lb-ft of torque. "Its road manners are perfect," Scott tells us. "On the street, it drives like a stock car with drag suspension. It's the perfect street/strip sleeper."

Is Scott Springer's '79 Fox undeniably cool in spite of being a Fairmont, or because it's a Fairmont? Does it really matter? 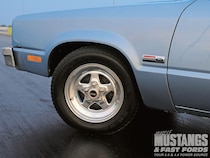 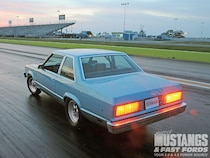 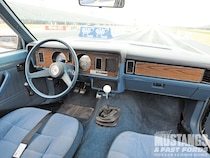