Dan Carlson Uses His 240,000-Mile '90 Mustang GT For Research And Development, And Destroys The Competition With His Daily Driver.

When you own and operate a performance shop, testing products and combinations to achieve real-world results gives you a higher level of credibility with your customers and an edge over your competition. Dan Carlson, of Bohemia, New York, knows the importance of this firsthand. Dan is the proud owner of Realspeed Automotive, and has been using his '90 Mustang GT as a research and development tool for almost 20 years. And amazingly, even with over 240,000 miles on the odometer, he still uses this GT every day.

Dan bought the GT new in 1990 with a very specific goal in mind. He wanted to prove that it was possible to consistently run 11-second quarter-mile times, yet still have the drivability to take cross-country road trips. Today, with the vast offerings of the Mustang aftermarket, an 11-second daily driver is an almost common occurrence, yet in the early '90s, it was nearly unheard of. When Dan started out, his combination was simple but effective, and countless trips from Florida to New Hampshire while Dan was in college, proved it was absolutely possible to reliably go fast.

Throughout most of the '90s, Dan worked as an engineer for Steeda Autosports in Florida, and he used his Mustang as a research and development mule. But after nearly a decade at Steeda, Dan moved north and opened his own shop. In 2004 he started Realspeed Automotive, which is on Long Island. It is no surprise his '90 GT still handles the R&D duties as well as the labors of daily driving.

Over time, the Mustang has racked up nearly a quarter-million miles, many while using the original Vortech blower case. Dan's combination may have changed, but his overall go-fast goal is the same-and as the aftermarket has evolved, so has his GT. In the search to build a faster, more reliable daily driver, Dan has put together another simple, yet effective, combination.

The mega-mile Mustang has seen a few combos over time but this time around he started with a FRPP Sportsman 302 block and bumped the displacement to 327ci. A billet crankshaft spins a set of Eagle rods and Diamond pistons with a compression ratio of 9.3:1. A Vortech V1 SC Si-Trim supercharger force-feeds 16 pounds of boost into an Edelbrock Performer RPM intake. A custom-ground hydraulic-roller cam opens and closes the valves inside a set of Edelbrock Performer 5.0 aluminum cylinder heads where the air/fuel mixture is compressed. Exhaust gases escape through a set of JBA shorty headers into a MagnaFlow cross-pipe and out through Dynomax mufflers.

Power is transferred through a Spec stage-3 clutch to a Tremec 3550 five-speed transmission that flawlessly handles the gear changes despite over 100,000 miles of daily use. The gearbox spins an FRPP aluminum driveshaft, which uses a set of 3.55 gears to turn the 31-spline Moser axles hidden inside the stock 8.8-inch rearend housing. Up front, Steeda Ultralite drag springs and Tokico drag struts handle the weight transfer on hard launches, and a Steeda 5-link rear suspension does a stellar job of keeping the Mickey Thompson ET Street Radials securely planted to the pavement. Steeda Pentar wheels sit in all four corners and Nitto NT01 rubber wraps the fronts. 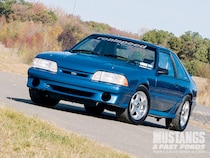 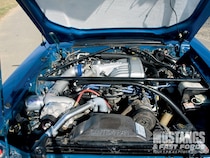 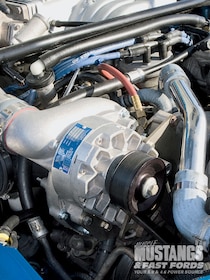 Once the combination was in place, it was time to put a tune in the car. This would be the key to its performance as a daily driver. Dan strapped his Stang to the Mustang Dyno at Realspeed and set his baseline. To keep the fuel under control, a 255-gph high-pressure, in-tank, fuel pump, along with a T-rex in-line pump feeds fuel through the stock lines to a set of 60 pound injectors. A Crane Hi-6R ignition box supplies spark to the NGK plugs via a stock distributor and Moroso wires. The final result of Dan's street tune is 525 hp at the rear hides. With racing on the brain, he headed to the dragstrip to see just how well his new combination would perform. After a few warm up passes, Dan launched his R&D rocket to a best elapsed time of 10.46-seconds at 132 mph. This is pretty impressive considering the car was driven to and from the track and gets 17 mpg. "I could easily make it a 9-second car," Dan tells us. "It's a street car, I drive it everywhere. I don't see the point in cutting it up or making it a trailer queen. I have too much fun driving it."

After 10 years in the Florida sun, the paint on Dan's Stang needed a little attention, though. So in the spring of 2008, the car was sent to Concise Automotive where it was treated to fresh top coat. The '93 Cobra body kit form Cervini's was reused along with the Steeda Aero Spoiler. When all was straight, a slathering of Ultra-Blue metallic was applied renewing the stock hue, and after the buffing was finished, the looks matched the performance.

"This car changed my life," adds Dan. "I swore I would never buy another front-wheel drive four-cylinder, so I bought the Mustang instead. If I didn't, I definitely wouldn't be where I am today."