Ed Weschler's '03 Lightning Shows That Being Different Is Good.

In a land filled with Terminator Cobras, SVT Lightnings, GT500s, and more blown and nitrous mod and pushrod-powered Mustangs than you can shake a stick at, it takes something truly special to stand above the crowd. While building that "special" car (or truck) is something all of us strive to do, sometimes one person does it just a bit wackier than others. Not to say that Ed Weschler is a wacky guy, he just loves shifty business, especially when it comes to his '03 Lightning.

You see, unlike a stock Lightning, of which all of them came with a column-shifted overdrive automatic, Ed's SVT hauler is different-it packs a clutch and a gear jammer. Yes, when Ed wants to get the truck moving, instead of dropping the shift lever to Drive, he uses his left leg to depress a clutch pedal, while his right arm shoves the shifter of a T56 six-speed forward. Then the only choice is whether to walk the truck off the line normally, or dump the clutch and create clouds of smoke. What a wonderful choice indeed.

"Ed wanted to do something different with his truck, and this is what he came up with," explains Bob Bennett, the owner of Bennett Coachworks in Milwaukee, Wisconsin. "We have built some high-end cars for Ed, and he has always wanted the biggest and baddest thing you could come up with. He originally wanted a Vortech-blown Chevy S-10 pickup, but once he test drove the Lightning, he bought it on the spot."

Bob and the crew at Bennett Coachworks were tabbed by Ed to do the work on the Lightning. While only a few minor upgrades were made to the powerplant of the truck, so far, the majority of the SVT special's novelty resides in the transmission choice. In fact, the 5.4L Two-Valve Triton motor was left untouched, save for the removal of the mufflers.

Obviously, the appeal of this truck is the fact that you have to make every gear change manually. As was to be expected, the swap took a fair amount of ingenuity and fabrication. After all, you are dumping the factory 4R100 overdrive slushbox for a T56 six-speed gearbox. "Having to clearance everything to get the trans to fit and work properly took some time," Bob comments. "Thankfully, our shop is experienced in building just about everything, from T-bucket roadsters to Ferraris. A couple of the mechanics who work here are very knowledgeable in the road race arena, and they helped to design and create the parts needed to make the swap work."

While the installation of the transmission necessitated some work to make it fit, a lot of thought had to go into making the swap look like Ford built it on the assembly line. Obviously, a new driveshaft had to be fabricated, and linking the tailshaft of the T56 to the Lightning's rear is a custom-built aluminum shaft. The other areas to be considered were the clutch choice, as well as the tune for the ECM.

"The installation of the clutch assembly really wasn't that bad," Bob says. "We installed a pedal assembly from an '03 F-150 truck that had a manual trans in it." Bob went with a hydraulic clutch system instead of a cable one, simply because it was more conducive for him to do so. As for the clutch department, some R&D work was called for, but nothing that required swapping multiple clutch units to find the right one. "We looked at numerous kinds of clutches, but settled on a Centerforce street/strip clutch, and it works flawlessly," Bob says. The clutch coincides with a Cobra R flywheel to get things under way from a dead stop. As for selecting each gear, the shifter was removed from the column, and the floor and carpet of the truck was modified for the long handle and Steeda knob that now protrudes into the cabin. 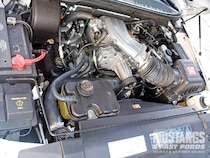 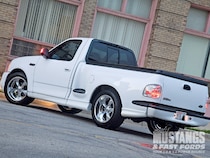 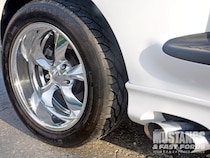 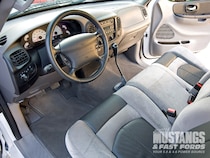 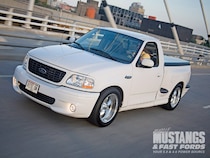 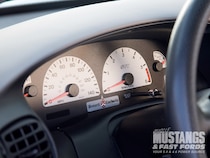 The most difficult part of the swap was tuning the ECM for the manual transmission. "By far, tuning the computer was the hardest part of it all," Bob comments. "The Lightning has a 3D Matrix computer system, which made it difficult for us to get things to work at first. We had to tell the computer a lot of lies to get it to work. We had to loop in something like four or five sensors in a different way, along with eliminating some entirely to finally get things moving. For instance, we had to set the rear gear ratio at 1.51:1 to get the vehicle speed sensor to work correctly."

In addition to having a do-it-yourself gearbox, he also wanted it to handle well. After all, the guy does own a few Ferraris. To satisfy Ed's wishes, Bob and the boys picked up the Ground Force catalog and ordered a bevy of suspension components. The front springs were swapped out for Ground Force items, along with a pair of the company's nitrogen struts and bumpstops. The same style shocks are found under the bed, along with Ground Force's rear bumpstops and shackle kit. The suspension components served to lower the truck, as well as enhance its handling characteristics. "We actually got one of the first packages for these trucks from Ground Force," Bennett admits. "The kit softened up the truck, making it ride more like a larger touring car than a truck." Rounding out the truck's modifications are the wheel and tire combo, which not only add to the handling improvement of the truck, but throws in a bit of a cool factor as well. A set of Boyd Coddington II 20-inch rims can be found on all four corners. The five-spoke shoes are dressed in BFGoodrich G-Force TAs sized 295/45R20.

While Bob says Ed has a blast driving around in his truck, it was he who gave us the best impression of what it's like to drive a six-speed supercharged Lightning truck. "The truck is a blast," he says. "Without the mufflers on it, it sounds like a Cup car. After we got done putting the finishing touches on it, there were three Lightning owners who saw the truck, and there were mixed emotions about it. One guy thought it was cool, another couldn't have cared less, and the last guy didn't like it at all. I gave all three of them rides, and came back with a two out of three approval rating. The guy who didn't like it was pretty mad when I got done because I slid him around pretty good in it. Overall though, it's a great truck. The first three gears are especially fun."

Thanks to Bob Bennett, Ed's truck is certainly different. It takes some shifty business to come up with something this cool. After all, it is a six-speed Lightning.