Those smug LS1 boys didn't know what hit 'em. Overnight, SN-95-the platform made famous for pairing an Eaton blower with the four-valve-per-cylinder mod mill-made for a lethal combination with crazy potential. Although the '03-'04 Cobras were often ridiculed by the Bow-Tie crowd, Ford's last Cobra was one bad mofo. Aptly dubbed the "Terminator," it pushed stock SVT Mustangs deep into the 12s despite a suspiciously conservative horsepower rating of 390. Simply swapping in a smaller blower pulley and uncorking the intake and exhaust tracts had Cobras laying down 500 hp at the wheels. The LS1 was finally subjected to a paternity test, and its daddy was the '03 Cobra.

While comparisons between Fords and Chevys are inevitable, perhaps the Cobra is more of a domestic rebuttal to the Toyota Supra. Like the Toyota's 2JZ-GTE inline-six, the Cobra's bulletproof long-block can handle hundreds of additional horsepower without breaking a sweat. Its stout iron block, steel H-beam rods, and forged crank and pistons laugh in the face of extra boost, but there's still a point where the stock Eaton gets wheezy. To push the boundaries of the stock 4.6 to the max, Manny Alvarez of HPP Racing (Lewisville, Texas) yanked the factory blower in favor of twin GT35R turbos. The result was 820 rwhp. 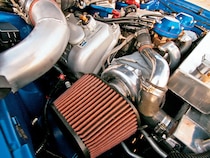 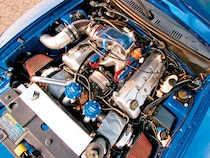 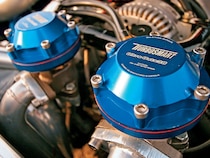 As impressive and Supra-like as those numbers may be, Manny set out to build a car that could actually run hard at the track, not be just a dyno queen. The first step was finding a suitable project car, but with the short, two-year production run of Terminator Cobras, Manny couldn't find one locally. He won an eBay auction for an '03 Cobra-sight unseen-with just 6,000 miles, and hoped for the best. "Luckily for me, the seller was honest and the car was in perfect shape," he says.

For both the street and the track, the Cobra wears a set of 26x11.5x17 Mickey Thompson ET Streets. The dual 3-inch exhaust features a set of MagnaFlow cats and mufflers.

That gamble may have paid off, but Manny didn't want to take any chances in the horsepower department. For assistance in fabricating the twin-turbo setup, he turned to Pro Turbo Systems (San Antonio, Texas). The two shops bounced ideas off each other, and PTS built the turbo kit to HPP Racing's specifica-tions. The system features 151/48-inch forward-facing headers, two 60mm turbos, and 3-inch downpipes. Compressed air is then chilled in a front-mount intercooler before dumping into an Accufab monoblade throttle-body, a custom sheetmetal plenum, and a Sullivan intake mani-fold. Fueling the monster is a Weldon 2345 pump and 75-lb/hr injectors, and James Vicars of HPP tuned the stock computer using an SCT chip. Although packaging twin turbos may seem like a nightmare, the HPP kit is surprisingly space efficient. Granted, an aftermarket K-member (Manny runs a D&D piece) is a must to free up space, the battery and power-steering assembly are the only parts that need to be relocated. The A/C stays put along with all other factory accessories.

With the factory blower and bolt-ons, the Cobra put down 476 hp to the tires. To accurately gauge the gains of the turbo system, HPP also dyno'd the car in naturally aspirated trim, which yielded 305 rwhp. While it's no secret that turbos run more efficiently than blowers, Manny's Cobra resoundingly reinforces that point once again. On 93-octane pump gas, the turbo Cobra laid down 515 hp at 9 psi of boost, 560 hp at 14 psi, and 680 hp at 16 psi. Adding a bottle of Torco fuel accelerator allowed 19 psi, for 820 rompin', stompin' horsepower to be unleashed. "It's hard to believe, but a bottle of Torco for every 5 gallons of gas will raise the octane rating by seven to eight numbers," says Manny. "People are amazed I can make this much power on pump gas. They see me filling up with 93 octane at the gas station and ask,'What are you doing?'"

Despite the stock IRS' propensity to explode, Manny somehow found a way to make it survive. He utilized a pair of Level 5 halfshafts from The Driveshaft Shop, a Billetflow differential brace, and Maximum Motorsports aluminum bushings to keep wheelhop in check. Even the factory Traction-Lok has yet to give up. Further upstream in the driveline is a Ram twin-disc clutch bolted to a Fidanza flywheel. The T56 has been fortified with a heavy-duty 26-spline input shaft out of an Aston Martin but is otherwise stock. Overall, the simplicity and durability of the driveline is arguably even more impressive than the stock long-block.

So what does it run? With the boost cranked up to 19 psi, the Cobra ran a best of 10.10 at 137 mph on a brutally hot and humid Texas summer day. Single-digit e.t.'s are a given in more hospitable air, and mid-nines are entirely feasible with a stalled automatic trans. Track heroics aside, Manny loves driving his car every day-on Mickey Thompson tires-and regularly takes customers out for joyrides. "I burned through a set of ET Streets in less than a week," he says. They've been replaced with 335/35-17 Hoosier drag radials, but the meats still spin prodigiously at 100 mph on the freeway. "I've been beating the snot out of the car for 6,000 miles since the turbo upgrade, and the car loves it. It's begging for more." Whenever the stock engine decides to expire, plans call for a stroker motor and even more boost. Gulp.