We Can Rebuild It, Better, Faster Than Before.

Rebuilding it to be better and faster is more or less what brothers Bob and Wayne Julian were thinking when they set off to modify their '65 Mustang fastback. What they ended up doing entailed far more than just swapping in some high-tech parts, though.

Stuffing modern drivetrains into old cars is the latest trend these days, and after pricing out the parts to swap a Terminator Cobra drivetrain into their fastback, Bob and Wayne came to the conclusion it would be cheaper just to buy a Cobra and strip it for parts.

The option to convert the '65 to Shelby specs was certainly there, but Bob insisted the Mustang retain both of its bumpers and factory Ford charm. This required fabricating new bumper mounts to the SN-95 chassis, but at this point, that was child's play.

"Stripping" isn't exactly an accurate term, however, as the '65 Stang lost far more of its factory fodder than did the slightly used, 5,000-mile '03 Cobra. In fact, only the exterior shell was used from the old stallion. The Cobra had its body panels and roof excised from the lower half of the chassis, which was set on a jig after the drivetrain was removed. There it was carefully melded with the '65 body.

The old-school Pony shell was 2 inches wider than the '03 Snake's chassis, which was easy enough to make up. The wheelbase-a full 7 inches longer than the SN-95-would be a far more adventurous task that entailed lengthening the front framerails and the fender aprons behind the shock towers. Track width was another issue, but one that was easily handled with a quartet of custom wheel arches.

Utilizing the SN-95's chassis meant the Cobra's IRS would rest in its factory-engineered location. "I've seen a lot of IRS installs in old cars, but they never looked right with regard to the axle geometry," Wayne says. The newer chassis also benefits from many years of automotive progress, and a supportive aftermarket that is flooded with performance-minded parts.

Sure, it looks like a nicely modified vintage Stang, but you'd be awfully surprised to find out it has all of the creature comforts, ride quality, speed, and efficiency of a late-model Pony. Does it get any better?

Said parts include a bevy of bolt-ons from Maximum Motorsports in San Luis Obispo, California, which supplied the the SN65 (as its owners call it) with one of its IRS upgrade packages, along with its high-performance Bilstein coilover suspension system. Maximum's tubular K-member and Fox-length control arms were employed as well.

The standard Cobra braking package made the transition over to the new car, but the wheels didn't have enough offset to tuck them in properly. "We checked with a lot of places, and no one was willing to work with us," Wayne says. "We then talked to Forgeline, and they made it happen-delivering the custom wheels in a short amount of time." The Forgeline RS3 wheels were wearing Toyo T1R Proxes rubber at the time of our photo shoot. The front 18x8.5 rims are shod with 245/40/18 rubber, while the 18x9.5s out back feature a 285/35/18 size. Since the shoot, though, Toyo's RA1 track tires have been fitted to the car in the same sizes and offer a considerable improvement in grip.

Internally, the DOHC Four-Valve supercharged Cobra powerplant was untouched-a MagnaFlow exhaust system and a custom modified Western Motorsports cold-air induction setup get the air moving in and out a little faster than before. 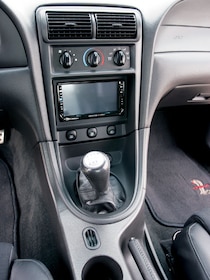 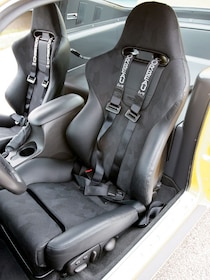 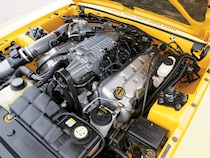 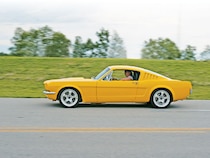 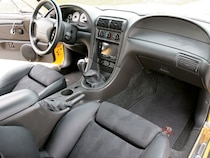 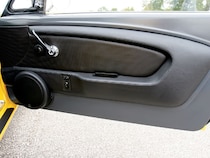 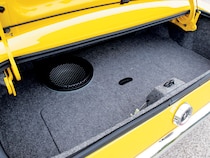 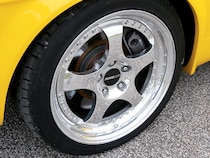