Cobra Too For You

Hordes of Mustang enthusiasts eagerly awaited the '05 SVT Cobra Mustang. It never came--and what a shame, because with refinement, power, and style, SVT Mustangs are like a death sentence to the competition. SVT's latest project, the GT500, is expected to pack 450-plus horsepower and handsome styling, but where does it leave the current Mustang buyer who wants more than just a base GT?

It leaves him with the need for supercharging and slicker styling. Perhaps that's why Power Surge Performance (Port Jefferson Station, New York) took matters into its own hands, by creating its very own Cobra model.

"I wanted to build an '05 Mustang to develop tuning and performance products," says owner Sal Mennella of PSP, "but I also wanted a car that made a statement. My inspiration for the look comes from some unexpected places, too. Everyone is trying to make the car look like an old Shelby or other vintage Mustang models. But I am a very big Mustang II enthusiast and an avid lover of the '76-'78 Cobra II. I feel the '05 lends itself to the Cobra II styling."

PSP enhanced the Three-Valve 4.6 with a 2.3-liter Lysholm twin screw supercharged from Saleen. When com-bined with enlarged injectors and a modified air inlet, the 281-inch V-8 pumped out 430 rwhp with 405 lb-ft of torque.

Admittedly, when we first heard Power Surge Performance fashioned its Mustang after the dreadfully poor-performing Cobra II, we cringed, but those early opinions changed when we saw the Sonic Blue example. In fact, we quickly realized the only thing hotter would be Farrah Fawcett herself riding shotgun--circa 1978, of course.

The factory blue hue on the '05 was enhanced with spoilers from Classic Design Concepts, and the grille was modified with a piece from Street Scene. PSP then color-coded the sideview mirrors and laid on the Cobra II-style striping. Cobra-clone wheels in bright white were then modified to fit the newer chassis and to set off the white stripes.

"The hoodscoop is a real '76 Cobra II part and it fits the stock hood perfectly," Sal says proudly. "We thought the rear of the car looked too high, so we blackened the back of the decklid between the taillights. I didn't like the '05 factory taillights either, so we blacked out part of the lenses to make them look like ones from the '67-'70 models. When it was done, the rear of the car looked fantastic." We agree.

While we would have never imagined it, the styling cues of the Cobra II fit the '05. With an intercooled Saleen blower pumping air into the Three-Valve, we couldn't wait to exercise the Mustang on Englishtown's quarter-mile, as well as on the MM&FF closed road course. 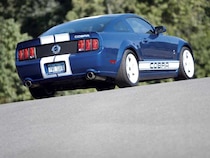 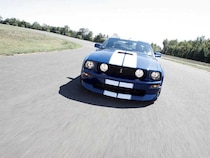 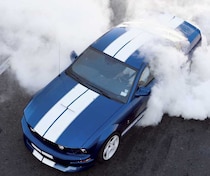 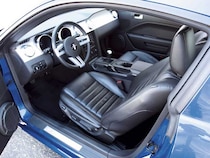 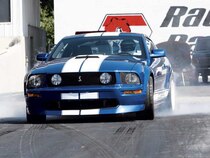 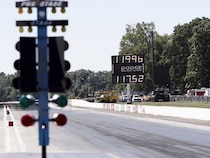 We got the chance on a perfect fall day, and found the PSP Cobra to have plenty of snarl. The 2.3-liter Lysholm twin-screw blower, with a Metco/JDM 3.400-inch drive pulley, was developing an estimated 10-12 psi of boost pressure (there was no gauge). Meanwhile, extra fuel came by way of eight 39-pound injectors (a la the '03 Cobra). A Diablo MAFia mass air tuner was used along with SCT software to get the tune just right. The result was 430 rwhp and 405 lb-ft of tire-frying torque. All this power made for a nice sound rumbling from the Borla mufflers and tailpipes.

Realizing there was more, we let the Stang sit for an hour, and we tossed a big bag of ice on the intake plenum. Once the blown 4.6 chilled like a fine wine, we unleashed the horses, nailed a 1.90-second 60-foot time, and powershifted the Steeda gearjammer as quickly as we could. The Nittos gripped as the PSP Cobra jetted to its quickest run of the day, an 11.996 at a super-strong 117.52 mph. Not bad for a street Stang weighing 3,820 pounds with driver.

Having proved the Cobra had venom under the stripped and scooped hood, we made a few hot laps on the MM&FF handling course to see if the Eibach springs and Metco control arms could get us through the turns in quick fashion.

Out on the twisty track, the Mustang seemed improved over stock, but there was still a slight amount of understeer that frustrated us. After trying some more laps, we realized that while the Mustang had wide tires and a lowered stance, the sticky Nitto Extreme Drag tires in the rear were providing more grip than the Nitto 555s mounted up front. Naturally, this was the ticket on the strip, but it hindered performance on the road course. With matching tires at all four corners, handling would have been more neutral, with less push and a better balance in the corners. Still, it cornered well and didn't have any nasty habits or excessive NVH.

By day's end, we were thrilled with the performance and didn't want to give up the seat. Call it a modern Cobra II or the SVT Cobra that could have been, but we'll call it a fun '05 Mustang that looks sick and can strike like a real snake.