Mom’s Hand-Me-Down Is a Keeper

Reality check. Despite what television's Hollyweird network drivel might have you believe, not many folks in the real world get handed the keys to a brand-new car when they reach driving age. Most just carry on and trundle off to high school on foot, by bicycle or bus (ask this author how he knows.) To most teenagers, the gift of any car would be a major score, and Erik Fuerst was one such fortunate son who received hand-me-down transportation from his mother in the form of her '63 Falcon four-door sedan. Mind you, Erik wasn't even born until 1984, so the six-cylinder, two-speed automatic compact was more than a bit road weary by the time he took possession in 2000. But that didn't matter in the least; Erik was geeked: "I was brought up with classic cars, specifically Falcons," he says. "Some of my most cherished childhood memories involve car shows, Falcon national conventions, and time spent working on Falcons."

So this was more than just teenage transportation; this was a blank, though somewhat rusty, canvas for the art of automotive personalization. Naturally, funding at age 16 was minimal, so in the short term, Erik satisfied himself with doing some much-needed bodywork, adding an FM radio (the car had been a radio-delete), and eventually scraping up enough dough to cover the factory beige paint with some Rangoon Red to match the original interior hue. Though he obviously had further plans for the project, one choice Erik made early on was that he would not abandon its inline six configuration for a V-8, and that decision was one of the things that ultimately attracted us to his car.

Like many long-term projects, this one has gradually evolved, and continues to do so. High-school mods included adding a Weber carb and a header with vocal exhaust, as well as swapping out the two-speed automatic for a slightly built C4. Erik explains that, even though his car was far from the most expensive or perfect at his school, "everyone knew about the ‘Red Falcon' in the parking lot." Note to teenagers: classic Fords are cool and get attention. 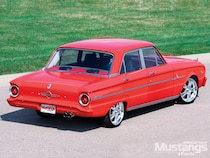 Once Erik joined the working world—as an antique furniture restorer—the obvious advantages of capitalism provided a larger modification budget for his beloved Falcon.

"I spent two years picking out the wheels," says Erik. "I Photoshop'd the car and spent numerous hours playing with wheel size, type, and ride height. While selecting the wheels, I did the current modifications that make this car worthy of its stance and wheels."

That slightly raked stance was achieved with 2-inch-lowering springs up front and drop blocks at the rear, where an additional leaf was added for more spring stiffness. Front and rear sway bars were added and KYB Gas-a-Just dampers are now in place, as are 10.5-inch disc brakes in front. We'd have to say ride height is just right for the 17-inch American Racing Casino rims, whose polished finish provides great contrast to the sedan's now-body-color bumpers. The rear bumper has been notched on the passenger side for the paired exhaust tips.

He also "pulled the engine and started from scratch" by first acquiring a complete 200-cid six from a '66 Mustang (his Falcon originally had the 170-inch version.) Erik had Automotive Supply Company rebuild the short-block using pistons originally designed for the Ford Tempo's 2.3-liter HSC four-banger. Why? Because they are dimensionally identical to the 200-cube six's pistons, but have a flat top for increased compression. He also sought out a 1978-vintage cylinder head for its superior valvetrain components, had it ported and polished, and treated to a three-angle valve job, and milled 0.050 inches. The resulting compression is 9.8:1. A Clifford hydraulic cam was chosen, having 0.444 lift and 206-degree duration (at 0.050), and the same company supplied its 6-into-1 header with 1.5-inch primaries. A bizarre side effect of the exhaust is in how much this I-6 now sounds like a V-8. Feeding all this is a Weber 32/36 DFAV two-barrel progressive carburetor, and the Dynojet-measured results are 150 rwhp and 200 rwtq—not bad for a 2,700-pound compact that also delivers 27 mpg on the highway.

Erik enlisted the seamstressing skills of his mother, Joan, to help reupholster his (formerly her) Falcon's interior, which now sports Mazda RX-7 buckets and a re-skinned rear bench. Custom touches include a Lokar tunnel-mount handbrake (with leather boot to match that of the five-speed shifter), a Falcon Futura console, and a glovebox door borrowed from a Mercury Comet. Black ACC loop-style carpet, a Grant steering wheel, some Auto Meter gauges, and an array of audio gear round out the cabin.

Outside, Erik's Falcon carries more bright work than it did from the factory. Though the side spears are original, he has added stainless trim around the side windows and the base of the rear window, as well as the rocker moldings. The bright trim around the fuel filler is a '60s-era aftermarket piece. Conversely, the bumpers, and some small trim items have been detailed in red to match the body hue. And the "I6" emblem on the front fenders—sourced from a '58 Ford Ranch Wagon—show that Erik is proud of the inline powerplant that resides between those fenders.

Is it done? Nope. "This car will always be a work in progress," Erik admits. "This year it received a two-core aluminum radiator with electric fan, a billet water neck, and front disc brakes with a dual-bowl master cylinder. In the future, it will hopefully receive an 8-inch rearend with a slightly higher [numerical] ratio, and a cold-air intake system."

We told you it was a keeper.