Bringing a Falcon truckster back from the ashes 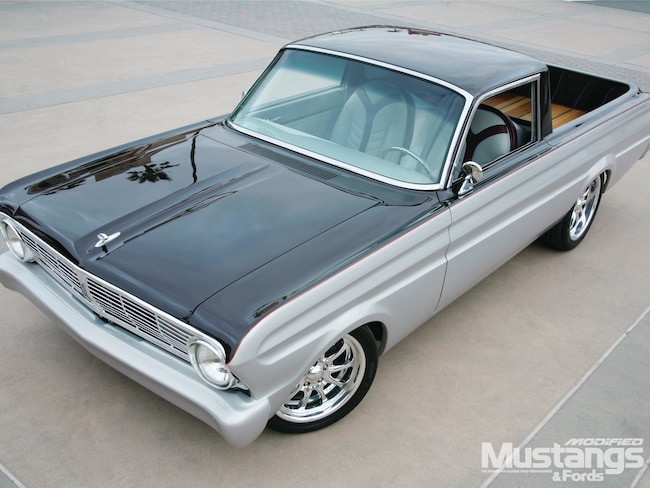 When Randy Bunner saw the Ranchero he had traded a paintjob for, he figured it was left for dead after seeing its condition. In the end, though, the car would rise like the proverbial Phoenix from the ashes. If you've read car magazines for any amount of time, you've undoubtedly come across more than one story comparing the rebuild of a car to a "phoenix rising from the ashes." In the case of Randy Bunner's '65 Ford Ranchero, though, the metaphor is warranted. It all started when Randy, an experienced paint and body man, offered to perform his craft on a friend's wife's '65 Nova wagon in exchange for the Ranchero. Randy lives in Mesa, Arizona, while his buddy was in Leona Valley, California. The deal was he would return the Nova to Cali, then pick up the Ranchero.

"It had an engine fire and it was pretty rough all the way around," said Randy. The Ranchero had ash all over everything. It had been roasted like a chestnut. But even roasted nuts have a bit of crunch left in them. "I'm always up for a challenge," said Randy. The first step was to hose out the body. Randy took hold of the hose like a fireman and sprayed for days, and afterwards, he lingered for months wondering what to do with the roasted Ranchero. Putting a stock engine in it and making it a daily driver was one option, but one that was soon passed up. No, Randy decided to recreate the Ranchero, so the bodyman got to work. Starting with the front bumper, which was molded into the front fenders, the fender/rocker gap was also smoothed over. Randy also shaved the door handles and cut and removed the driprails. Shaving the wipers was fairly easy, but the cutting and molding of the bedrails took some work. 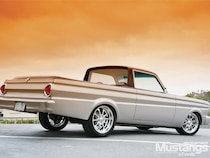 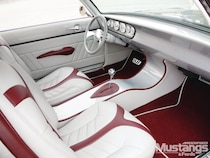 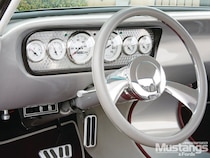 "The bedrails perplexed me," said Randy, "but my 12-year-old son, Jon, who has helped me on some other projects, suggested I simply roll the roof to the pinch weld on the bed surround. It was an awesome idea and it worked out great. Randy originally became inspired by a rendering of a Falcon concept car. The car in the image had radiuses on all four of the wheel openings. Randy tried forming this on the front fenders and it worked. After that he built the rear radiuses, including the wheelhouses. He mentioned that having the car on the rotisserie made it all a little easier.

After four months of bodywork and getting everything shaved and molded as he liked it, Randy was ready to choose his colors. The hue that got the nod for the upper part was a dark shade of burgundy, while the bottom half is painted silver. The two colors are separated with a faint orange stripe and the two-tone is buried in four coats of clear. "When I finished and pulled it out of the booth, I was totally stoked," said Randy. While the body looked great, it still needed a heart and legs. The legs came in the form of Aldan coilover front and a custom four-link coilover setup out back, while the heart, well, that's a little more complex. 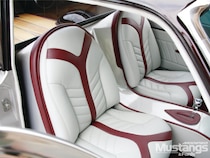 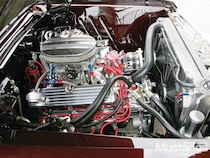 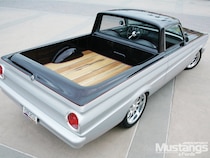 A 347 cubic-inch small-block Ford engine from Speed Sports was built with Mahle forged pistons, steel Eagle H-beam rods and Total Seal rings. Other engine accoutrements include a Holley Double Pumper carb to get the 91-octane flowing into the combustion chambers, and Doug's headers to facilitate the evacuation of the nasty gasses before they exit out a MagnaFlow muffler. With 400 horsepower and 425 lb-ft of torque, there are some serious ponies on this Ranch. A Ford 8-inch with Traction-Lok gets the power to the rear 17x8 Billet Intros, which in turn rotate the Goodyear Eagle meats. We should mention that both rims have a 4-1/2-inch offset making for a nicely filled out wheel arch.

With the looks sorted outside, the cabin was next. Gray and burgundy leather covers the custom-fitted '98 Mustang seats. A suede headliner brushes the hair on your head, but just tickles you if you don't have any up there. One of the most suavecito things about the interior is the one-off metal dash/console that has all the controls under the dash. Despite the burned up beginnings of this project, it would seem Randy was wise to follow his instincts, as the resulting Ranchero truly flies above its more common siblings.

The owner of this 1968 Ford Ranchero was used to his Boss 302 so he took his racing history and this is what you see here. Take a look at how this Boss-inspired Ranchero turned out.

Paul Kistler has always been a fan of the Ford body style and wanted to build something different to bring to the shows. Check out more of his 1957 Ford Ranchero with it's 427 under the hood in the January 2013 issue of Modified Mustang & Fords Magazine