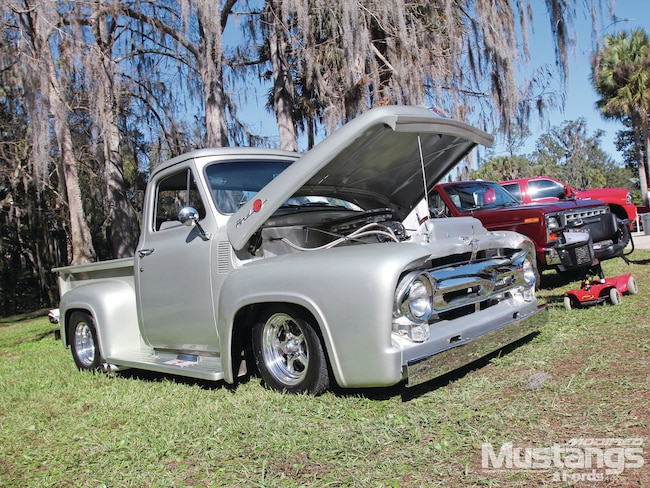 Friendship, especially when it involves classic cars, can bring out interesting situations. We've all heard of stories where a friend helps another by purchasing his car with the promise of selling it back when the friend gets back on his/her feet. Or possibly the less-plausible-but-still-funny-to-read stories of car guys selling their pride and joy to a friend for a dollar so it doesn't end up in the divorce paperwork. While neither of these scenarios involved the Effie you see here on these pages, it was nonetheless a 25-year-old friendship that got this project off on the right foot.

Nelson Vazquez of Panama City, Florida, is on the road for weeks at a time for his job as construction project manager for Dollar General. With that much time behind the wheel, he's always finding classics in knee-high grass on the side of less-traveled roads. His pal, Bill Ziel, knew this and asked Nelson to keep an eye out for a '53-'55 F-series truck for a future project. Nelson was in agreement with Bill when he stated that these were the "sexiest trucks ever built," and we're pretty much in agreement as well.

Nelson found a candidate parked alongside a farmhouse near Albany, Georgia. No one was home, but Nelson left a note on the farmhouse door hoping the owner would be willing to let the '54 F-100 go to a new home. A week later, Nelson received a call from the owner and agreed to a $1,200 purchase price. Nelson and Bill hauled the truck home for Bill to start on his new project. However, as we mentioned earlier, Nelson is a huge fan of the early F-series as well and talked Bill into helping him restore it for himself. A daily driver build plan that had been put in place previously went straight out the window (along with the planned budget) and things got crazy from there on out. Bill, a drag racer at heart, made no qualms about the truck needing lots of power, and a good foundation to support said power. "I succumbed to the dream and just wrote the checks," Nelson told us.

Starting with the metal work, the truck was stripped down and inspected. The cab, doors, and hood were all usable, but the duo ordered fresh fenders and a complete bed from Mid '50s parts. PPG Silver Sage was laid over the body as well as the dash and cab walls. The pair decided a crate engine was the way to go to save time and money. Herbert Performance screwed together one of its big-block 521ci strokers based off of a 460 block. A C6 automatic and mild stall converter makes for effortless cruising.

Inside, Nelson wanted a clean and near stock look, so the stock bench was given the nod to stay in place for continued service, albeit wrapped in fresh gray leather. A billet gauge panel with Auto Meter NV gauges, a Lokar shifter, and a LeCarra steering wheel are but a few styling touches added. The gas pedal was fabricated off of Nelson's bass pedal from his drum set for a personal touch to the rig. Lastly, the bed was refinished in a mix of stained oak and poplar for something different than the standard wood and stainless trim motif.

The project took just over two years to complete and now Nelson and his friend Bill take turns driving the F-100 on sunny days and scaring their wives half to death with the estimated 650 horsepower on tap. While we didn't get a chance to get scared in the passenger seat, we did think enough of the truck just as it sat to award it our Editor's Choice for Best Ford at this past January's Silver Springs Mustang & Ford Roundup in Silver Springs, Florida. After you look at these pictures, we're sure you'll agree with our assessment.