This '57 T-bird commands the attention of everyone. 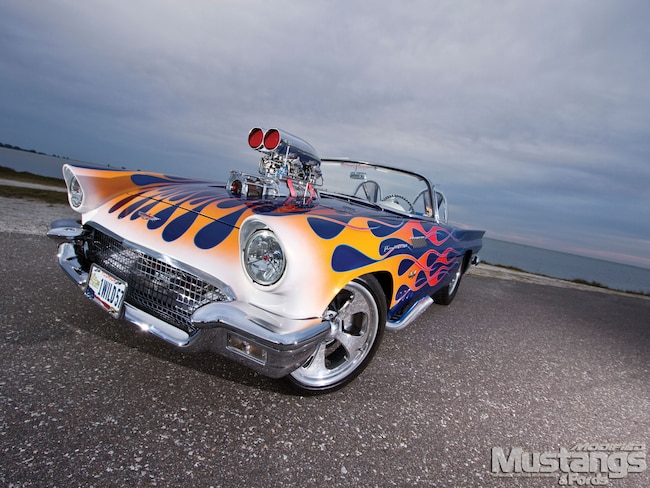 Ken Wallace and his wife, Darlene, are a match made in heaven. The Florida couple share a passion for highperformance classic cars, so Ken never had to argue much to build a fun toy. Together, they helped create the vivid hot rod you see before you--a Thunderbird that generates its own seismic activity, and brings new meaning to the famed moniker. The fact that it started life with a 245- horse V-8 is but a memory now. With a storied past building hot rods, and as avid enthusiasts, Ken and Darlene discussed buying a classic T-bird to perform a concours restoration on. "We were both very excited because this has always been a dream car for both of us," explains Ken. With a little looking around, they located a clean example in Tampa, just north of their Parrish, By Kevin DiOssi Florida, home in 1999. After making the quick drive up and giving the car a once-over, Ken was behind the wheel of the 'Bird and heading back home. "The car seemed fairly clean and still had its original engine," he recalls. "We didn't even start on the restoration until several months after we got it home." From the looks of it, Ken thought he would be able to get away with just some minor wet-sanding and the bodywork would be done. Needless to say, that didn't work out; so the Thunderbird was blasted down to bare metal where it revealed its many imperfections. 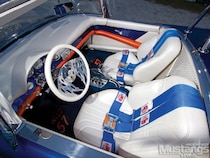 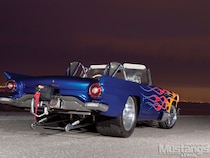 "We spent many nights and weekends getting the car straightened out before we were happy with the body and were ready to send it on to paint." As it was getting strapped down on the trailer, Ken noticed something"wasn't quite right" about one of the front fenders. As a result, the trip to the paint shop was scrapped and he was back to the drawing board. By this point, Ken and Darlene had already put in a tremendous amount of effort to bring the car to the level it was in, and the allure of a concours restoration had worn off. The unforeseen roadblock with the bodywork sucked the remaining energy they had to continue the build. But it was just waiting for new life to be shot back into it. As it turned out, Ken was a big Pro Street guy who loved the shrill whine of a large blower injecting massive quantities of air and fuel into a big-block. After joking around with Darlene about cutting the car up, the joke wore off and became a very serious alternative.

"Concours was not the way to go for me, so I began to part out the pieces I wouldn't need on the build." From that point forward, Ken cracked his knuckles and got to work on creating custom wheeltubs, shaving the doors, fabricating a rollbar, and daydreaming of a blown powerplant. His goal was to build the ultimate Pro Street Thunderbird that commanded attention standing still. Using his background in the industry, Ken was able to lend a hand in every aspect of the build, and only left it to the experts when necessary. Obviously, one of the most important parts of the Pro Street theme is having a terrorizing blower protruding from the hood. For that, a 429 big-block topped with an 8-71 was going to do the trick. Or so he thought. "After doing a little more research and investigation, I knew I would have to use a Cammer for this project." He tracked down a bare block, heads, and valve covers to slowly piece together the engine. Kevin Klispie lent his expertise and provided the skillful machine work to resuscitate the engine. 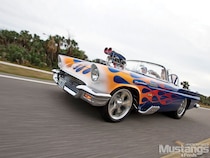 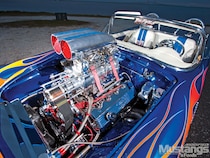 Ken had a theme in mind for the interior and paint that would rival the attention that the polished blower garnered. Outside, Wild Wes Adkins brewed up a special color blue for the 'Bird, and designed a set of wicked fames to whip across the curvy body. Inside, Ken and his friends got to work on a custom ostrichskinned dash, carpet, covered seats, console, and fnally a chrome rollbar with incorporated brake lights. Unfortunately, the project was derailed by Darlene's health on several occasions, but their shared passion helped as distraction until it was fnally complete. he build took roughly 12 years from beginning to end, but the end result was exactly what he had envisioned. Darlene's health has improved, and the two share the joy in cruising around and taking every car show by surprise. As the Thunderbird quietly rolls off the trailer and onto level ground, Ken fres the Cammer to life. The sound erupts out of the zoomies and echoes off the surrounding trees, while the sweet smell of high-octane fuel brings tears to any nearby onlooker's eyes. Everyone around is looking in astonishment while Ken sits back with Darlene and they crack a quick smile to each other. Mission accomplished.

When Rosemary Nichols Took The Wheel Of This Dusk Rose 1957 Ford Thunderbird, It Was Pure Lust - Mustang & Fords Magazine