Every Now and Then However, the Build Redefines Itself! 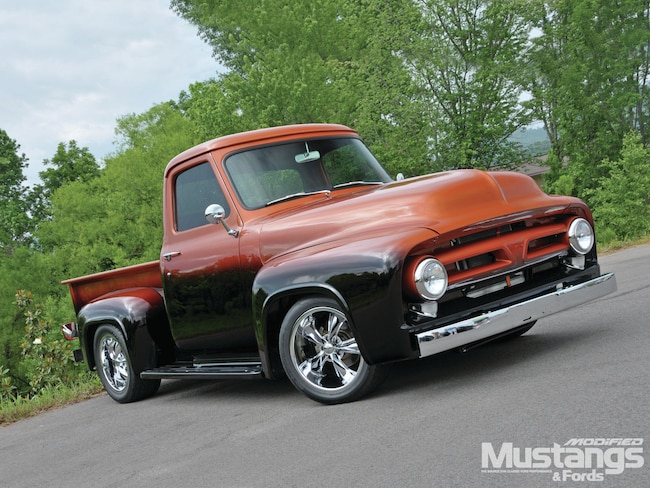 If you're an avid automotive enthusiast, the chances are good that you have a favorite brand or body style--one that you think about often and wonder if a personalized version will ever wind up in your garage. When you spot one at a car show, the notion expands along with your motivation, and before long, the search is on. That's how it happened for George Lindsey, from Smithville, Missouri. George retired from TransWorld Airlines and is a staunch Ford fan, enjoying his '64 Ford Galaxie restomod, along with a couple of '49 and '50 Fords. George was ready for a new project vehicle, and was looking for a '53 F-100 like the one Dad had on the farm when he was a kid.

The initial plan was to make it into a nice daily driver. George and his brother own a salvage yard that they operate part-time, but even with that advantage, locating a suitable project vehicle wasn't going well--that is until a chance encounter turned up a lead on a pair of F-100s not far from home. George contacted the owner, inspected the trucks, and agreed with the seller's stipulation that he buy both trucks as a package deal. He trailered them home, rebuilding one and using the other for parts.

The yearlong customizing process began by choosing the better of the two cabs, replacing the rusted corners, and repairing the roof. The bed, hood, and grille were salvageable, but in order to expedite the build, new front fenders and running boards were purchased from Mid Fifty F-100 Parts; bumpers, headlight rings, taillights, a wood bed, and a '51-vintage tailgate came from LMC Truck; and rear fenders were sourced from a friend. As the parts came together, George added a forward-tilting hood to showcase the new engine and, in order to keep the body lines smooth, the cowl vent was welded up, as were all the body seams. He did the rough bodywork and his son-in-law, Paul Read, followed up making everything smooth. 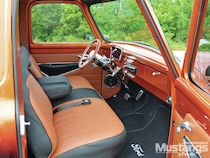 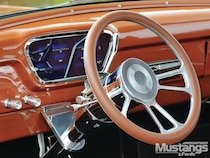 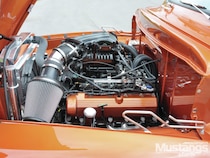 Chassis mods began with boxing the framerails and installing a Heidts front end with rack-and-pinion steering, along with four-wheel disc brakes. Aftermarket Pete & Jakes leaf springs hold an 8.8 Ford Explorer Traction-Lok rearend fitted with 3.73 gears and 31-spline Ford axles. George's friend, Tony Vargas, set up the suspension and did the wiring. The reworked chassis became a roller, thanks to a set of 18-inch chrome Foose Legend rims and Nitto rubber.

As the body and chassis upgrades were nearing completion, the search continued for a suitable powerplant, and George finally located the perfect Blue Oval upgrade. A wrecked '02 Ford Lightning pickup truck with a 5.4L supercharged V-8 and electronically controlled 4R100 automatic transmission solved the problem. Producing more than enough power in stock form, the engine needed only minor changes. Increased breathing up top came by way of a K&N filter, and polished Ford Racing ceramic-coated headers that exhale into 2-1/2-inch pipes, while Flowmaster mufflers help out down below. Once the powertrain was complete, the rejuvenated sheetmetal was mated to the high-tech chassis and it finally began looking like a truck. With the end in sight, interior upgrades were next.

George increased the comfort factor inside with a bench seat from a '94 Ford pickup, narrowed 3 inches to fit. His good friend, Bob Gossey, from Gladstone, Missouri, stitched the contrasting cinnamon and black Allante vinyl upholstery, and covered the seat and door panels. George upgraded the doors to single-pane, power windows from Mid Fifty, and then added an ididit column to hold the Billet Specialties steering wheel, a Lokar package to dress up the brake and accelerator, and a Dakota Digital dash to track underhood activity with a modern digital flair. Passenger-pampering comfort touches include a Vintage Air A/C with vents in the new lower dash panel, along with the Kenwood eXcelon iPod-equipped stereo filling the cab with music using 6.5-inch coaxials in the kick panels and 6x9 component sets behind the seat. 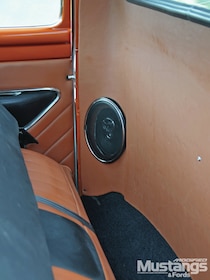 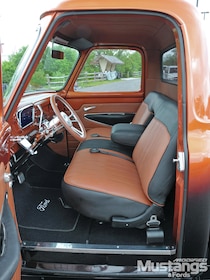 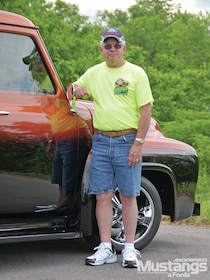 There was one step left, and it's always the most important for that positive first impression. Lots of color choices were available, and choosing the right one was a serious proposition. George had already vetoed several of the basic shades and was looking for something genuinely distinctive. Son-in-law, Paul, solved the problem, showing up one weekend with a model Ford truck painted with an amazing fade that began with PPG Atomic Orange, standard Black, Candy Black, and Candy Red. The combination was an instant success, and George gave the OK. Paul painted the truck in his home shop in Plattsburg, Missouri, carrying the distinctive fade into the bed, already outfitted with traditional oak slats and stainless steel strips. The metal portions of the interior also benefitted from his spray gun.

The build took a year, and that one-of-a-kind paintjob, along with the dozens of other custom touches, changed everything. What started out as a simple daily driver morphed into a full-blown show truck. (George isn't the first person to discover that a build often rewrites its own ending!) The multiple upgrades blend a high level of comfort with a high level of performance, making the truck the perfect choice for a road trip. George and his wife, Donna, regularly drive their rejuvenated ride to area shows, and the distinctive mods have made the vintage Ford a strong trophy magnet. Special thanks to Paul Read for bodywork and paint, Bob Gossey for the interior, Tony Vargas for suspension work and wiring, Ben Redd for the custom wood bed, along with Tyler Read, Steve Read, Lisa Read, Cameron Dyer, Jordan Dyer, and especially George's understanding wife, Donna.

This 1954 Ford F-100 Pickup is the Best of Both Worlds--Its A Great Classic Custom, A Rocket on the Road, and A Sterophile’s Dream! - Modified Mustangs & Fords