The body mods for this '71 Maverick all started with a hand-fabricated, all-metal chin spoiler 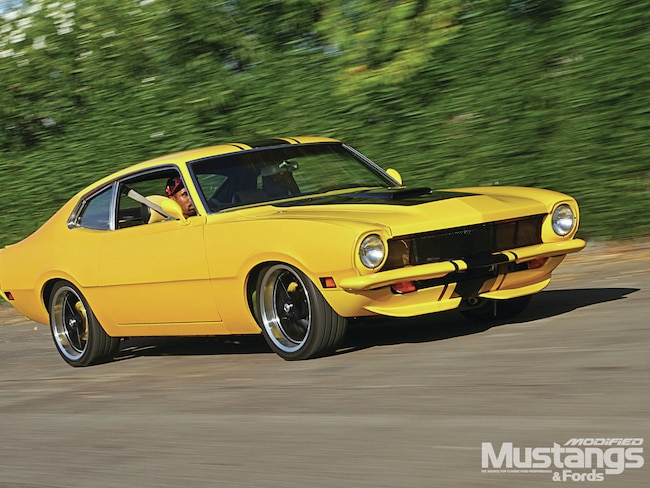 As the model Ford built to replace the Falcon, the Maverick was to take over the sub-compact void. It was to be small and inexpensive, aimed at satisfying the efficiency-driven VW Beetle crowd. Its success in that regard can be argued, especially after the introduction of the pint-sized Pinto, but the fact that it's become an excellent canvas for the builder is a fact. Weighing in at 3,000 pounds or less, and having a factory V-8 option, gives the builder a good place to start. Calvin Cazenave, owner of the bumble bee Maverick, has always seen past the mundane commuter car to the possibilities of this particular model. He has owned many other cars over the years, but he's always had a Maverick in the harem.

Twenty years ago, Calvin spotted this gem and passed the lead on to a friend who was looking for a project. Despite his own wants, he knew his buddy, Darrell, needed his help finding one. Darrell's place served only as a 5-year parking spot as his interest in the car waned. Calvin turned him on to a Fox-body convertible Mustang that he would enjoy more, and snagged the Mav' from him for a mere $300. That kind of price tag doesn't get you much these days, but Calvin and his close group of friends have an understanding about their cars and parts. 'Whenever one of us needs a part that the other one has and isn't using, it's fair game for a trade or an IOU. It'll bite you in the butt sometimes, but it's the only way we could possibly get things done," Calvin says. 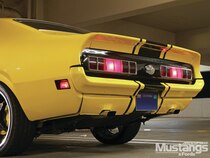 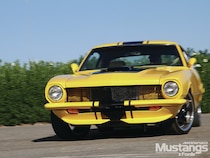 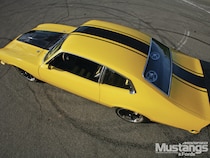 Now in his own hands, the Maverick ran as-is until the inevitable happened. The thought started with thinking that some new wheels would really make the car look nicer. It then snowballed into: well, I can't have wheels without something better than the straight-six to back it up. Of course, then the rust-free paint wasn't good enough, and neither was the stocker interior. Not being a wealthy dude, Calvin knew it would be hard work with late nights in his at-home garage. The progress would probably come at a-part-a-week pace, but he didn't mind. His background is in fabricating, but not the kind our gearhead minds conjure up. In the late '80s, Calvin inherited his uncle's welding business. He now welds large-scale commercial jobs, like welding up California's biggest vaults and sealing gas/water lines for major businesses. These contracts keep him above water and allow him to give his project the treatment he desires.

Calvin held off the initial tear down for four years, while his Maverick lived as a rock-solid daily driver. The next six would be spent converting it to what it is today. The 5.0 liter engine came from a mix of leftover parts and low-buck trades. Inner-circle member, Bubba, donated the block, while the heads and crankshaft were yanked from an '87 T-bird with a toasted short-block that Calvin had in his collection. The parts spent a little time at the machine shop for the regular clean-up and true-up services, and then they went back to Calvin's garage for assembly. He's never been one to sub out work that he could do himself, even if he thought it could be done better by a pro.

The main focus of the build, however, was on the body. 'I wanted to build the car that Carroll Shelby would have if he were to have built a Maverick," Calvin explains. 'I wanted someone looking at it to think it looks great, but not be able to put their finger on why. I wanted a subtle, but highly modified ride I could experiment with and use to grow my fabricating skills," he added. The unlimited possibilities of manipulation metal have always intrigued him. His nephew Marquis, whom he raised, expressed an interest in the car modification world early and helped Calvin when he could. Being of a newer generation, Marquis was a computer and wiring wiz, taking all of that responsibility on cars that Calvin played crew chief for. Marquis purchased a Maverick of his own and plans on restoring it to factory condition, as it was the model with all of the bells and whistles in 1973. Calvin will inevitably help him on his project as Marquis has on his. 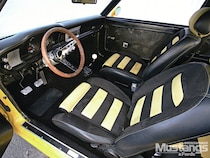 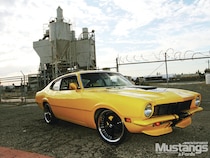 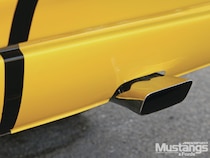 The body mods started with a hand-fabricated, all-metal chin spoiler that looks as if it came on the car from the factory. The hood got a Shelby-style scoop and custom reverse-opening hood hinges designed and built by Calvin himself. He's got a unique fabrication style that always works for him, 'I just look at the problem and just start cutting and welding. I'm not into writing it down or making templates; that only confuses me." The most impressive modification is the 3-inch lengthened tail and molded spoiler. It mimics the contours of the painted rear bumper to blend it into the rear like it always had been there. The bodywork list continues with shaved door handles, grafted '87 Jaguar gas cap, and 'El Cheapo" side-view mirrors bought from the local parts store and painted to match.

Calvin doesn't claim to be an expert at everything. He admitted that he struggled to fasten the headliner--and didn't quite like how it turned out--but can live with it. However, he did manage to create dead-flat and smooth interior panels out of carbon fiber without any throw-away practice pieces. He left the sewing to the experts, and had Sergio Diaz of Sacramento, California, re-wrap Calvin's factory seats with yellow and black vinyl and suede to match the exterior. The whole point of the car was to have something he would enjoy cruising around town in, so putting in an upgraded stereo was a must. He installed a Pioneer head unit under a custom aluminum plate on the dash to play tunes through the amped up eight-speaker system.

So what's next for Calvin? He will continue to show and enjoy his Maverick rather than continue to dump money into a car that's really just fine as it is. He hadn't put as many miles on it as he thought he would, 'I take her out every once in a while so she doesn't get mad at me," he says. A concept we're all familiar with. His next build is a 'Boss 9" '68 Torino fastback that he'll fit with a 460 block and Jon Kaase's 429 heads. Maybe one day you'll see this one in the Modified Mustangs & Ford pages as well. 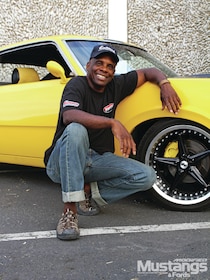 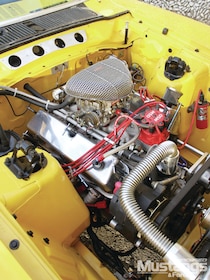 1972 Ford Maverick Race Car - Pouring The Coals To It

Don Bowles Sr. shows no signs of slowing down in his 1972 Ford Maverick race car despite turning 73 years young. See it for yourself in the January 2013 issue of Modified Mustangs & Fords Magazine.

Read on as we take our 1973 Maverick Grabber and buildup the engine with a four-cylinder. Read on for complete details along with buildup photos only in Modified Mustangs & Fords