As a teenager, John Kutzlo's first two cars were Falcons and he loved 'em 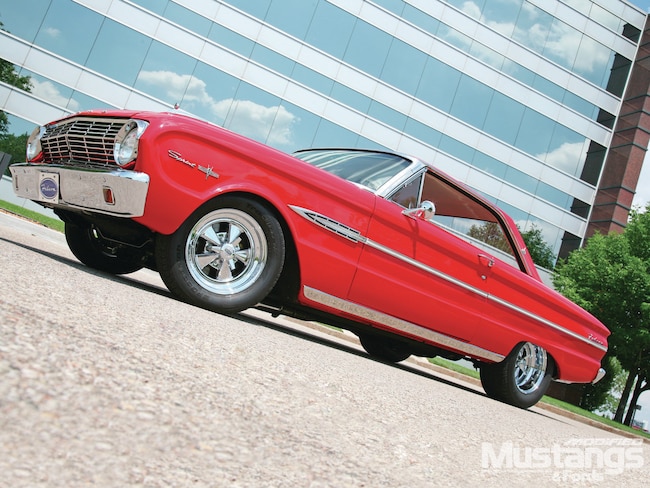 As a teenager, John Kutzlo's first two cars were Falcons and he loved 'em. But then life interjected its typical dose of reality and John would go at least three and a half decades before even sitting behind the wheel of another one. Once he did, this seemingly simple act brought back a flood of fond memories, so John soon joined the Falcon Club of America and began the search for a solid example of Ford's compelling compact that he could hot rod to suit his tastes.

From a condition standpoint, John says he found that "most Falcons of interest were located in California, Arizona, Texas, or Florida"--all far from his homestead in Nicholasville, Kentucky. But then serendipity--and eBay--stepped in, and he learned of one that looked promising less than two hours from home.

Says John, "It had new paint, new interior, and the drivetrain was fully operational and all electrical components were fully functional. The owner needed to sell it because he had just bought a convertible Falcon." That seller, Lonnie Creech, had bought the hardtop together with a parts car--both in pretty rough shape--and then reportedly worked his tail off for quite some time to bring it back to a condition that ultimately attracted John. Lonnie obviously did nice work, some of which included redoing the interior in maroon, to contrast with the hardtop's Rangoon Red exterior, and going to the trouble of fabricating a custom aluminum panel beneath the dash to house gauges and air conditioning outlets. John sums it up this way, "Lonnie said he's only seen his wife really mad at him twice: once when he brought the Falcon home, and once when he sold it."

Obviously, it was John who bought it, and he had further plans for his new find, especially after seeing another particularly nicely done-up '63 at a Falcon Nationals event. He and a buddy, Barry McFadden (who also happens to be a skilled fabricator), then saw that same car again at the GoodGuys event in Columbus, crawled underneath, took some photos, and "the next thing [we] knew, [we] were at the Heidts booth in vendors row, ordering a Mustang II frontend."

In January 2008, John rolled his Falcon into Barry's shop for installation of the new front clip and a 9-inch rearend. Barry told him to order his desired new wheels and he'd cut the rearend to fit, so John picked up some classic Cragar SS hoops, 15x8 in back with 4-inch backspacing, to go with some meaty P255/60R15 rear rubber. Barry then set to work on a mini-tub job to make everything tuck within the wheelwells. 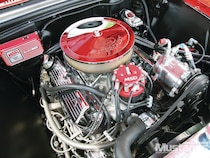 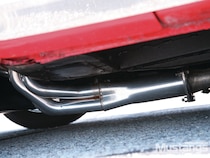 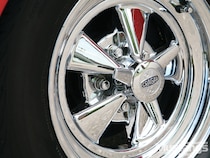 Meanwhile, John yanked the hardtop's perfectly good 302, took it to Noble Racing and had Tim Noble bore and stroke it out to 352 torque-rich cubes using an Eagle stroker kit. It came together in Barry McFadden's shop (McFabricators) with John's self-described help as, "parts cleaner, paint man, parts chaser, and bill payer." We're guessing that last role was vitally important.

Upholstered by the previous owner in materials a few shades darker than the surrounding Rangoon Red paint, John's interior features a custom-made below-dash panel that houses a trio of gauges and some A/C outlets--and a period-style Hurst shifter.

The shop doors finally opened on April 10, 2008, and the freshened Falcon flew out of the nest. But the project wasn't quite done yet.

Shortly after rollout, John decided more carb, in the form of a 650-cfm Barry Grant Speed Demon, would help feed the additional displacement, so he had one sent to McFadden's shop for installation and tuning. Afterwards, Barry opted to take John's Falcon for a short testdrive (purely for diagnostic reasons, of course) and in the process of speed-shifting into Second, managed to blow its driveshaft right onto the road. Guess the new carb worked. 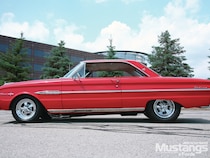 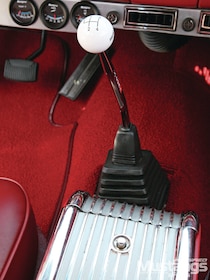 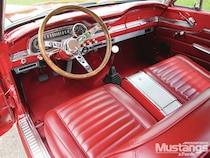 The cooling demands of the stroked small-block, not to mention its air conditioning hardware, were also too much for the stock radiator, so an upgraded aluminum replacement from Northern is now onboard after the original split at one of the car's first big show outings. Early in 2010, John also swapped out his Top Loader transmission for a five-speed T-5. The result? "It's brought highway cruising down from 3,000 rpm to around 2,000," says John. "It has also contributed to lower engine temperatures and better gas mileage (17 mpg on the road with air conditioning)." This is important because John says he doesn't store and trailer his Falcon—he drives it. Having photographed it there, we can confirm that one of the places he drove was way up to Dearborn, Michigan, for the Falcon Club of America's 50th Anniversary celebration.

And this Falcon won't suffer the same fate as the two he owned (and sold) in his teen years. This one's a definite keeper, and John figures it will be his children who will eventually make the decision when to sell it, but only after he's gone.

No doubt about it: early Falcons were smoothly sculpted, with a look that has aged very gracefully. John Kutzlo's '63 hardtop now wears just about every piece of chrome or stainless trim ever conceived for the compact, including classic Cragars complete with spinners. And yes, those rear skins are just a little beefier than stock.