This '67 Fairlane is a one of a kind street machine 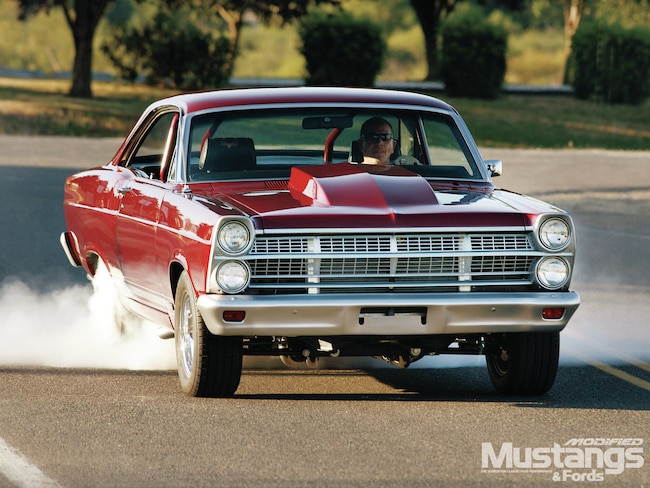 Tim Ray tells us he had three goals in mind when he set out to build the '67 Fairlane you see featured on these pages. One, he wanted a "one-of-a-kind" street machine. Two, it had to be "truly immaculate," and three, he wanted it "just plain nasty." From the looks and sounds of things, Tim scored on all points. Some would describe this classic Ford intermediate as "old school," and in general that's a fair assessment. There's no doubt Tim went with a traditional recipe for cutting a large swath on the street scene, which mostly involves a "bigger is better" approach.

Tim bought his Fairlane from a police officer who was in the preliminary stages of turning the original 289 car into a Pro Street effort. The often heard story of changing interests benefitted Tim on this one, and he bought the car as a roller with a paltry amount of work completed. With plenty of help from friends John Martell and Mike Morales, Tim spent about four years on the transformation. Morales was the guy who worked magic with the body and paint, eventually laying down Dupont products in an '02 Honda Chianti Red. Does it look like a modern interpretation of Ford's period Vintage Burgundy? Yep, but it turns out that wasn't a factor in Tim's choice. He simply liked the color. The realization that it looked like a souped up factory hue came later, and with positive sentiment. More period vibes come from the silver rocker stripes and GTA emblems. No, the car isn't a real GTA, but the improved aesthetics are hard to beat.

Ever seen a '66-67 Fairlane with a 4-inch cowl hood? We hadn't either until now, and it's clearly an unusual choice, but remember one of Tim's mantras--one of a kind. Though this styling cue is mostly associated with Chevrolets, we give Tim props for creating the all-steel concoction all on his own. That it's functional by providing clearance and ventilation for the high-rising, 385-series big-block underneath, well, it's all the explanation that's necessary.

A large part of the "plain nasty" character Tim was striving for comes from the 429-based engine that truly shakes, rattles, and rolls. Weighing in at 521 cubes, courtesy of a 4.39 by 4.30-inch bore and stroke, the engine is big and mean by any standard. Tim built the engine himself using a 1970 block. He filled it with a rotating assembly made up of a Scat stroker crank, Scat H-beams, and SRP forged pistons. In conjunction with the Trick Flow aluminum cylinder heads, the result is a 13:1 compression ratio and an appetite for 114-octane race fuel. A custom Delta solid roller cam is correspondingly large, and the audio that comes through the pair of 3-inch Borla Racing bullet mufflers is something we wish we could better convey in print. Suffice it to say, it's sweet music, accompanied by the unmistakable scent that comes from a high-compression engine burning race fuel. 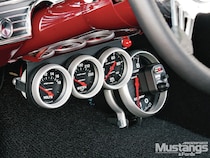 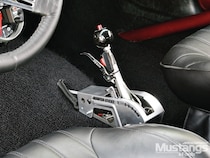 Sticking nearly 800 horsepower to the ground would be a challenge with stock suspension and the limited confines of a Fairlane rear wheelhouse, so to better accomplish the task, Tim went big yet again. Starting with an Art Morrison back half frame kit, John Martell helped install the totally revised suspension, which now sports Art Morrison ladder bars and coilovers, and a beefy 9-inch rearend with a Detroit locker, 35-spline Dutchman axles, and a 4.11 gearset. Widened inner wheelhouses made room for sizable 29x14.50 Hoosier Quick Time Pros, but nevertheless, our photos reveal it's still easy for Tim to overcome the big bite--big surprise!

Despite the racy engine and suspension, Tim wasn't out to build a pure quarter-miler--after all, that's not what street machines are all about. While the car is admittedly devoid of creature comforts such as tunes and air conditioning, a peek inside reveals a nicely finished cockpit from where Tim is well set to command and control. Features include Procar buckets, Auto Meter gauges, a LeCarra steering wheel, and a Hurst Quarter Stick. Exterior colors are used nicely on the dash and six-point rollbar, and the GT theme continues with Dearborn-Classics-sourced door panels. Tim says there is no sound system because you'd never hear it. Indeed!

We asked Tim if he'd had a chance to run the car at the local track, but the answer was negative as of press time. Too bad, because we'd really love to know what this larger-than-life Fairlane could do when pressed to the limit. Would the results tell us if bigger is better? That's hard to say, but we'll tell you this much--don't argue with the sentiment. 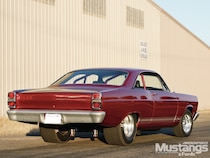 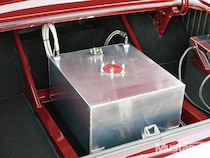 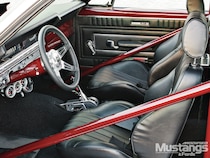 Check out this 1967 Ford Fairlane that is influenced by Hot Rod Craftsman Bobby Alloway. Don't miss out on the details of this Patron of the Arts.

This 1967 Ford Fairlane 500 XL is costume built to perfection. It has been modified to sport both elogance and performance. Modified Mustangs & Fords Magazine

You can't have a classic car without having good sound in it. For this reason we took this 1967 Ford Fairlane and decided to install the new Custom Autosound SecretAudio System for a magnificent sound system! - Modifed Mustangs & Fords