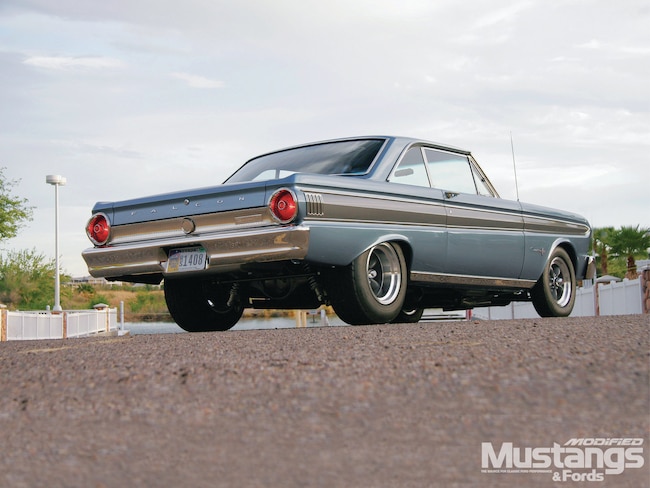 Most of us, at one time or another, have dreamed of making it big, scoring that perfect job, or even hitting the lottery. It goes hand in hand with the American dream, and we grow up seeing others succeed and hope one day to make our own fortune. For the large majority of us though, our fortunes are a bit smaller in size, but quite possibly just as valuable. As a gas- and oil-drilling consultant, Laughlin, Nevada's, Bob Wyndle knows all about digging deep and finding buried treasure firsthand. While his wife, Laurie, questioned whether or not the rusty bird was worth the money, Bob had seen one too many automotive treasures come and go to let this one get away.

Growing up in Ojai, California, Bob was the proud owner of a '64 Falcon Sprint while he was in high school.

"I used to do a lot of drag racing with it back then," Bob recalls. "We would drive an hour and a half or more to go cruise Van Nuys Boulevard, too." The year was 1976, and for a mere $350, Bob had himself quite the little hot rod, which packed a 260ci small-block V-8, and a two-speed transmission.

Life was good until one rainy night in 1981 when Bob was coming home from work. Falling asleep at the wheel, Bob veered off Highway 33 in Ventura, and ended up at the bottom of an embankment. The California Highway patrol was there within five minutes, and while Bob was in good shape, the Falcon was not. The undercarriage and suspension was ruined.

Bob found a suitable replacement for the Falcon in a '70 Six-Pack 'Cuda, but two back-to-back tickets had the local judge suggesting he sell it lest he end up behind bars next time. A '68 GTO convertible was Bob's next ride after that.

"I could kick myself now," says Bob. "Back then, you could buy muscle cars left and right for a few hundred dollars." Bob was also quite capable of fixing them up, as he had learned to work on cars while employed at his father's service station.

Following the GTO, there was a '72 Challenger, and later, a '65 Ranchero with a 289 and a four-speed. Bob drove that for some time, rebuilt the engine, and did some header and carb work to it. After that, Bob got out of the muscle cars for a while, but the memory of his original Falcon never faded.

"My '64 was my favorite car throughout the years," says Bob. While he had since relocated to Nevada, Bob couldn't seem to find a suitable replacement nearby. His search efforts would end up taking him to Long Beach, California, where he purchased another Falcon Sprint for $6,000 about six years ago. 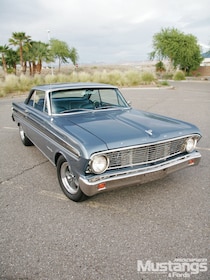 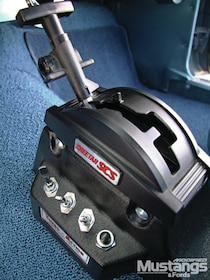 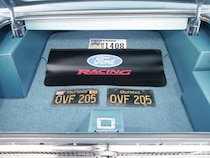 "It was in rough shape from living near the salt water for so long," Bob notes. "It had the original 260 with a two-speed automatic, and had the original black California plates still on it."

After bringing the car home, Bob then took it to Brandon and Marie Uhlig of Brandon's Auto Body in Morristown, Arizona. Bob had met Brandon while living in Arizona previously and the two became friends.

"I told him that I just wanted to keep it stock and make a nice cruiser out of it, but Brandon said if that was the case, to take it somewhere else," Bob says. "He said, 'If you rebuild it stock, no one will look at it, but if you build something wild, everyone will look at it.' Boy, was he right."

Brandon started the project by stripping the car and removing all of the rust from the body. He built frame connectors to tie the chassis together, and also mini-tubbed the car. From there, the shock towers were removed and a Heidts independent front suspension was welded in, along with the company's matching four-link out back.

Bob's original plans for the engine included an all-aluminum Roush 427, but in Brandon's mind, it wouldn't be enough. To that end, Brandon suggested going all out with the biggest, baddest, and meanest engine that Ford Racing made at the time--a 521ci big-block. Bob agreed to that as long as Brandon could equip it with everything else, meaning power steering, air conditioning, and more. Turns out, the big-block was actually much cheaper, made more power, and in the end, probably garners more looks.

With the powertrain set, Bob, like most people, agonized over the exterior color. Originally Sky Blue with a painted white top, the Falcon wasn't exactly the epitome of a muscle car. Bob considered a dark green hue at first, but later found himself at a Ford dealership eyeing a new Mustang in Windveil Blue. Brandon suggested the gray accent stripe that was designed to match the centers of the American Racing Torq Thrust D wheels.

As Bob and Brandon were sorting out the exterior design, Brandon wanted to slick out the body, and ditch the chrome trim completely. Bob was adamant in keeping the chrome, but agreed to Brandon's suggestion to nickel plate every single piece for a unique look. It wasn't an inexpensive endeavor, but Bob tells us that everyone notices the end result. "I get a lot of compliments at car shows about it."

Since finishing the Falcon, Bob's Sprint has won a handful of Best of Show trophies. It's always turning heads when the big-block comes thundering onto the show grounds, and Bob is quick to point out that he drives the Falcon everywhere, and to every show.

Though the end result should be enough for you to believe that Bob's automotive treasure is indeed his Falcon, if there are any doubters, consider this; Bob bought a Boss 302 Mustang to restore around the same time as the Falcon purchase--this is the one he finished first. And before the Boss gets its turn under the restoration knife, Bob recently acquired a '65 Falcon Sprint convertible for his wife that is next. Bob tells us that the ragtop is one of 300 made, and one of 17 that are known to be registered. The 60,000-mile bird is still running its original 289 small-block, C4 transmission, and original paint, and was purchased from the original owner's son. It is getting a rotisserie concours resto due to its rare status. Though fortunes have come and gone, it sounds like Bob Wyndle has struck it rich once again.