After an unusual inspiration from a movie, Mark was determined to add a '54 F-100 to his collection 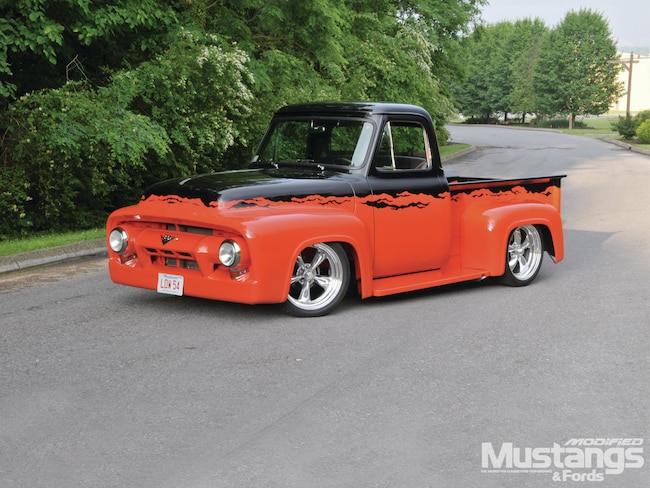 The motivation to create a cool custom vehicle can come from many sources, with inputs as varied as a childhood memory from 40 years ago to an article in yesterday's automotive magazine. For Mark Baker, the inspiration to build his first custom was even more unusual. Originally from London, Mark got the creative urge after seeing the movie American Graffiti. The yellow '32 Ford Hi-Boy coupe left an indelible impression and he was determined to have one of his own. Since very few Ford parts were available in England, Mark refined his fabrication skills and with the help of an old Ford Galaxie donor car, he mixed and matched until he completed the coupe.

Years later—and now living in Middleboro, Massachusetts—Mark is using the skills from that first custom to create this '54 Ford F-250, the second custom in his collection. It began with a neighbor taking the truck in trade and Mark buying it from him. Barely driveable, Mark brought the truck home, assisted by the mouse living under the dash! Using a technique he learned with the '32 Ford, one of his first purchases was a '79 Lincoln Continental that would serve as a donor car. 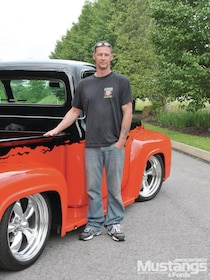 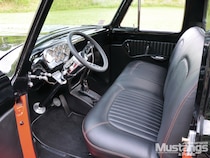 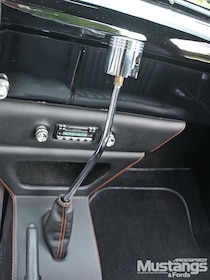 Work began in earnest and everyone agrees, one of the key steps when restoring an old truck is boxing the factory frame. After strengthening the original rails, Mark added new crossmembers and a C-notch in the rear. Since he wanted to use a 6-foot bed, Mark cut 8 inches from the middle of the F-250 frame so the rear axle would fit the wheelwells, then removed another 4 inches from the rear overhang. With length and strength established, Mark added a modern Heidts Mustang II front suspension with 2-inch drop spindles and Heidts shocks to the steering end. For the driving end, the Lincoln donated its 9-inch rear, held in place by a TCI four-link with coilovers and fitted with 31-spline axles and 3.89 gears. The front wheels use new 11-inch Wilwood disc brakes while the rear retains the stock Lincoln discs.

Bodywork began with repairing rusted areas, which in this case, meant a new floor, rocker panels, rear cab corners, firewall, front fenders, and running boards. The cowl was welded shut along with the side vents. Door handles were eliminated and 3-inch-wider fiberglass rear fenders replaced the originals. The new 6-foot bed from Dan Carpenter has the corners welded smooth and is now positioned one inch closer to the cab. 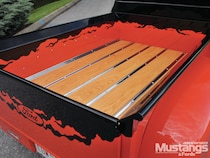 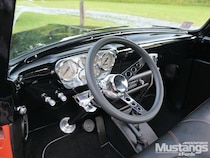 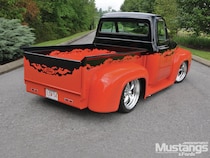 Cape Cod Upholstery in Middleboro, modernized the interior with black leather and suede covering the truck's original bench seat along with custom armrests and pleats in the door panels. Orange stitching picks up the truck's exterior shades. On the dash, the glovebox was welded shut and the smooth dash holds a collection of Omega "Timeless Tan" Series gauges in a billet aluminum surround. Mark revised the lower dash with an additional upholstered piece to hold the Custom Autosound head unit, blending it into the new center console that houses the oversized Lokar shifter for the C-6 automatic.

The area behind the seats was pressed into service to hold the Alpine amplifier, the 10-disc CD changer, and a pair of 6x9 rear speakers. The door panels hold 61?2-inch component sets and 2-inch tweeters are located up above in the headliner. Power windows and a 12-volt outlet to charge Mark's computer complete the modernization of this half-century-plus-old truck.

Initially using the engine from the Lincoln donor car, Mark found that the 400 wasn't quite enough to get the job done. After some research, a 460 crate engine, bored out to 501 cubic inches, became the headache-free alternative. The big V-8 was equipped with a Holley 750-cfm carb on an Edelbrock Performer RPM Air Gap manifold, complete with a bright Endurashine finish. Edelbrock aluminum heads introduce the air/fuel mix to the heavy-duty internals that include a forged crank, Eagle rods, Mahle pistons, and a Comp roller cam. MSD ignition explodes the mix and Sanderson headers deal with spent gases, directing them through a pair of Flowmaster mufflers and exiting through side exhausts in the running boards. A Griffin dual-fan radiator setup keeps everything cool. Proformance Unlimited in Freehold, New Jersey, built the engine, mating it to a C6 automatic trans equipped with a B&M shift kit. The painted inner fender panels and firewall highlight the potent new powerplant.

The distinctive DuPont Hugger Orange and black paint was the final touch. Several friends told him that a two-tone paintjob wouldn't work since there were no clear dividing lines on the truck. He went over several ideas with his good friend Bill Barnes until they came up with a design. To show you just how versatile he is, Mark got up early one morning, taped off the custom graphics, and "What you see," he says with a smile, "is the mood I was in at the time." He sprayed the colors in his home garage, creating a custom paintjob that any professional shop would be proud of. The graphics flow through the door jambs, inside the bed, and through the engine compartment.

Looking back on the six-year build, Mark says, "Everything was a learning process. My first car was fiberglass, so not much sheetmetal experience transferred." The truck was originally scheduled to become a regular driver for Mark's wife, Tricia. Now that it's done, well, Tricia doesn't get to drive it much anymore! A frequent competitor on the show circuit and a regular trophy winner, the rejuvenated truck was photographed at this year's F-100 Supernationals in Pigeon Forge, Tennessee, where it captured a class win plus Editors Choice. With two classic creations under his belt, Mark is already looking for his next project, this time a custom Cabover tow vehicle for the F-250, painted to match.

Special thanks to ProFormance Unlimited for the high-revving V-8 and to Cape Cod Interiors for its unique upholstery work. Thanks to Mark's wife, Tricia Perkins, for not divorcing him during the last six years spent in the garage, and finally, to the memory of his good friend, Bill Barnes, who worked with him throughout the build and passed away last year.