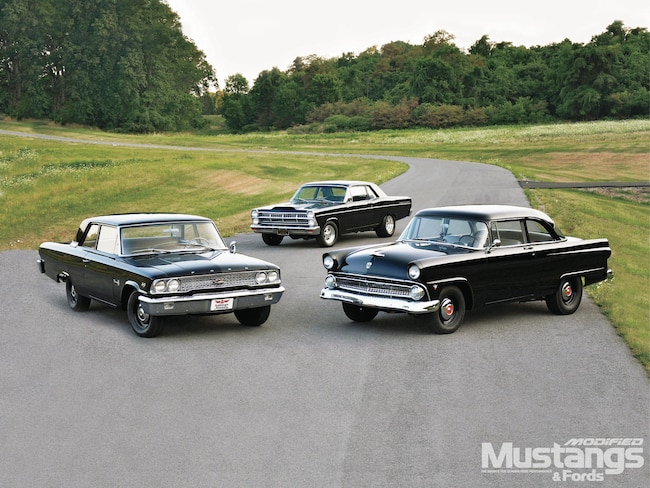 Three Fords that are all black, all post cars, all big motors, all immaculate, and all owned by three cousins in West Virginia. Two brothers, Carroll and Delane, and their cousin Kenny are three lifelong Ford guys from West Virginia who have been building Blue Oval brawlers for more than 40 years. The three cousins have formed a trio of high horsepower harmony, and while their cars vary, each bares a family resemblance in performance, style, and execution. These boys love horsepower, and what's better, the three cousins actually drive the cars regularly, thereby promoting a love for what these cars can become when placed in the right hands.

"I found the car in Orange, Virginia. It was a nice car, about 95-percent rust-free, with 65,000 miles on it. The owner had five '55 Fords. He was, unfortunately, going through a divorce and had to sell a couple of them," recalls Carroll Foster of Gerrardstown, West Virginia. "The car was originally black with a 272ci Y-block, three on the tree, 3.78 gears, with 15-inch tires and wheels and gray interior. I bought the car in May 2004, and drove it for about six months. I showed it, and drove it in a couple of parades, and then tore it apart to change the motor and restore the car to better than new. It had to stay black, because black is my favorite color. If your car's not black, it needs a paintjob."

The motor is an all-aluminum, 427-based 496ci stroker. Carroll bought the aluminum block from Carroll Shelby in 2004. The rotating assembly includes Diamond 4.310-inch pistons, Scat 6.700-inch rods, and a Scat 4.250-inch-stroke forged steel crank. Carroll opted for a Comp Cams mechanical roller cam with 0.740-inch valve lift, and Comp Cams valvesprings. Kuntz and Co's Jim Kuntz in Arkadelphia, Arkansas, ported and polished the Blue Thunder heads, and a Ford tunnel wedge intake became home to two 600-cfm BJBK Holley carbs. The motor runs Crites headers, a Meziere electric water pump, and a Griffin aluminum radiator. Carroll estimates that this engine on the dyno would report 800 horsepower. It's a stout combination for sure.

Brakes on this frightening '55 are stock. Yes, stock. When asked why his big bad business coupe runs OEM brakes, Carroll explains, "These drums are small and light, but their downfall is if you have to stop hard two or three times, you have to replace them. But I have no trouble with the standard brakes."

The interior was faded, so Carroll's brother found N.O.S. '55 stock interior seat covers and installed a back seat in the business coupe since the rare pieces for the rear seat delete didn't come with the car. An Autometer tachometer and gauges keep the driver informed, while the Turbo Action Cheetah shifter controls a Performance Automatic C4 racing transmission with Kevlar bands, a trans brake, and a Coan converter.

Out back you'll find a 9-inch out of a '63 Galaxie that has been braced and narrowed to fit the '55. An aluminum driveshaft rotates a set of 3.89 gears that turn a Detroit Locker. Carroll's cousin Kenny Hess installed the Chassis Engineering four-link suspension with coilovers without cutting the stock frame.

The '55 Ford is seriously overlooked as hot rod material, but owner Carroll Foster had a vision for a killer stealth '55. 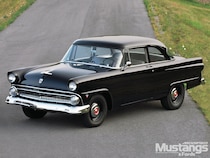 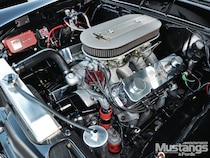 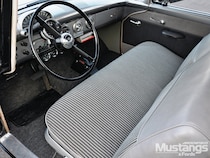 A quintessential Blue Oval street fighter, Kenny Hess' Fairlane is only the latest in a strong history of hot rods. Kenny owns Kenny's Auto Repair in Martinsburg, West Virginia, and has built a number of high-performance Fords, including drag cars and pulling trucks. A buddy alerted Kenny to this '67 Ford Fairlane that had been sitting in a barn. As purchased, the rust-free car came with a 289 V-8 with an automatic on the column. However, life got even better for this Fairlane with Kenny in charge.

Word of mouth came to Kenny about a Roush-built Boss 429 in a pulling truck that was for sale locally. In pulling trim, the motor had produced 1,089 hp on the dyno. Kenny figured that since the Boss 429 was the baddest powerplant ever built by Ford, and since no one had ever put a Boss 429 in a Fairlane to his knowledge, it was incumbent upon him to build a Boss 429 '67 Fairlane post car...a black one.

Kenny purchased the Boss 429 motor and proceeded to rebuild it for street/strip duty. Concurrently, Kenny got the Fairlane ready to shoehorn the massive Boss motor in the engine compartment. Because of the width of the new engine, the shock towers were trimmed back about by 2 inches per side, while shortening the upper control arms 2 inches per side. Other custom changes include a set of fabricated headers, a custom cooling system, and a Crites 427 hood.

The performance of the Boss 429 motor exceeds expectations, and the wow factor is off the charts. It has been stroked to 557 ci via a Scat 4.50-inch forged steel stroker crank, H-beam rods, and an 0.080-inch overbore to 4.444 inches. The Boss 429 heads were ported and treated to larger titanium valves from Roush, and the mechanical roller cam and valvetrain were sourced from Comp Cams. The Blue Thunder intake manifold hosts two 750-cfm Edelbrock carburetors. Ignition chores are handled by MSD, while Steve Kaliher of Frackville, Pennsylvania, fabricated the headers.

In this writer's opinion, the '66-'67 Fairlane post is one of Ford's best looking cars ever. Weld Pro Stars announce that this car has had a few upgrades since leaving Dearborn. Mickey Thompson Sportsman S/R radials are the tires of choice. The front 15x5 Pro Stars mount 26x8x15LT tires, while the rear 15x10 Pro Stars with 5 inches offset are shod with 28x12x15LTs.

The interior is straight from the factory, with just a Summit tach and gauges installed in plain view. Seat covers came from Price Upholstery in Martinsburg, West Virginia. The Hurst Super Shifter ensures short shifts and positive action for the 2.78 First-gear Top Loader, which Kenny rebuilt himself. A McLaren 12-inch clutch and pressure plate actuated by a Speedway hydraulic clutch and master cylinder kit makes shifting smooth and reliable.

Up front, the suspension is all stock, but the rear suspension is not. Kenny installed a four-link coilover suspension with frame connectors using Chassis Engineering parts. The fully braced Ford 9-inch has been fortified with 4.11 gears, a Detroit Locker, and Moser 31-spline axles.

Hot rods are all about stance and swagger, and this Fairlane defines both. Though Kenny resisted temptation for the most part, short bursts to exercise the Boss engine showed that this car was built right.

Delane Foster owns this '63 Ford 300 and explained the story behind his find.

"I went to a car show at National Trails in Ohio, and I saw a Ford 300 Q-code 406 car. I tried to buy the car, but he wouldn't sell it. I said to my brother that if I ever came across a car like that again, I was going to buy it. We went to Winchester, Virginia, to a parts guy we know, and out of the blue, he tells us that he knows of a '63 Ford 300 with a 427 in it, all original. The car itself was originally sold to a former professor at the University of Tennessee, and then purchased by a collector who passed it on to the broker who eventually sold it to me. It took me 30 years to find an R-code, and six years to fix it."

When Ford introduced the midyear '63¢ Fastback style, the simpler 300 post car was unfortunately discontinued. Delane has been told that his 300 R-code car is one of nine built, with the number of remaining examples unknown.

The engine is an FE 427 center oiler rated at 425 hp and 480 lb-ft of torque. Its hungry cylinders are fed by two four-barrel carburetors on a low riser intake manifold. The engine is largely original, as is the Borg Warner T-10 four-speed transmission.

Not to be outdone by his family members, Delane made a couple upgrades to the car, including a slightly hotter than stock Crane Cam, a three-angle valve job for the heads, and an MSD distributor and 6AL box. Well known Ford carb guru, the late Mike Ulrey, rebuilt the 550-cfm Holley carburetors.

Doug Abshire at Big K's Towing Service and Body Shop (Inwood, West Virginia) painted all three cars, and judging by the quality of his work, Doug is the man for bodywork and paint. Black is tough enough to get right, but doing three of them?

The factory Light Gold interior features N.O.S. Ford seat covers that Delane located in Oregon to retain the OEM look. To give it a bit of a "Day Two" flavor, Delane decided to add a Sun tach and gauges, plus a Hurst shifter. Delane has the restored shifter at home, but the Hurst shifter is far superior to the factory unit.

So were Delane, Carroll, and Kenny wanting to purposely create a trio of big-inch black Ford post cars? Delane explains, "We weren't setting up anything, it's just that we all have the same tastes. We wouldn't have anything but post cars. That's just our heritage. The post cars help avoid body flex since they have extra support. For that reason, they are the better choice for high-performance applications. And they just look cool." Though all of the cars are beautiful, the real beauty of this story is the shared experiences and lifelong memories produced by building some of the best high-performance Fords on the planet. These guys and these cars are what the hobby is all about.