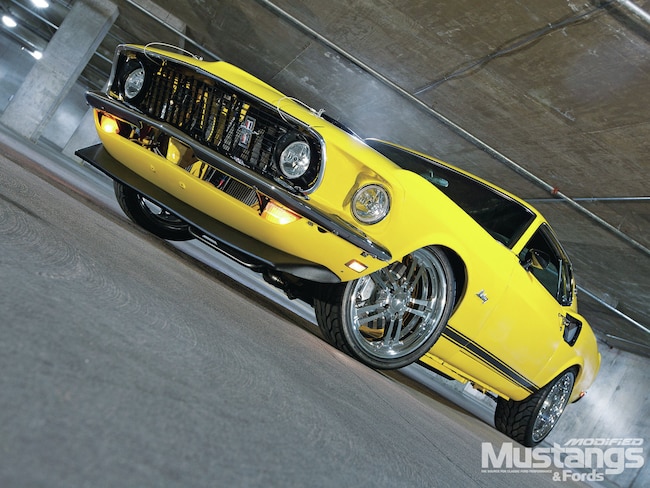 A young elementary school age boy walked past a "cool race car" parked in a driveway each day. There it sat as he walked to and from school. He really wasn't sure what kind of car it was at that young age, but all he and his pals knew was it was cool looking. Well, that cool looking car was actually a '69 Mustang SportsRoof with a 351W and C6 automatic; no doubt a fun ride for its owner. Strange thing is, that little boy walking to school would someday own that SportsRoof, he just didn't know it yet. The boy in question is Anthony Massimiano of Newtown Square, Pennsylvania.

Fast forward to 1985; Anthony is now a 16-year-old high school student and drives a '71 Mustang convertible (that SportsRoof must have really left an impression, huh?). While at a stop sign waiting on traffic, Anthony's '71 convertible is rear ended, totaling the car. "I can remember hearing my mom on the phone arguing with the insurance company about the payout. I did a lot of work to the car, but didn't have any receipts; I was only 16 and didn't know to keep them." Anthony received $500 from the insurance settlement and the insurance company allowed him to keep the car.

Anthony figured he'd find another '71-'73 Mustang convertible and swap over all of the good remaining parts. Anthony's mom told him the '69 Mustang down the street he used to drool over as a kid was for sale for $1,200. Anthony knocked on the owner's door and the woman who owned it wouldn't let him drive it due to his age. Instead, she just took him for a ride in it. Anthony knew nothing about cars then and it was difficult to determine if the car had any issues as a lowly passenger, but he still wanted it.

Anthony knew of a local salvage yard that specialized in muscle cars and, believe it or not, it gave Anthony $500 for his wrecked '71. With a cool grand in his pocket he only had to scrape together an additional $200 to buy the SportsRoof. He brought the car home and began fixing it up over the summer. His father helped with some money for a basic paintjob.

"It was your typical slap some 'mud' on the body to fill in the rust holes and then a simple spray job, but it didn't look half bad. We also did the typical teenage updates like a stereo and speakers, loud mufflers, and so on," Anthony says. John Ottaviano, his high school buddy, helped him with said updates as well as future buildups on the car.

Anthony drove the car for the next several years as his daily driver, but during his third year in college, a friend in the back seat tried to get out and put his foot clear through the floor, Flintstone-style, due to rust.

"I figured it was too unsafe to drive, so I stored it since the rust repair work was beyond my knowledge at the time," Anthony tells us. He took it off the road in 1990 and his dad co-signed a loan for a daily driver. Anthony did tinker with it some over the next several years. He pulled the engine and trans and searched for trim parts at swap meets, and by 1997, Anthony started tearing into it seriously.

"I met Mike McGinnis, who worked at G&A Collision Center, during the summer of 1999. He introduced me to his boss who said to bring the car down and I could use the shop for paint and body repairs. I worked three nights a week on the car for almost two years replacing torque boxes, floorpans, and other structural stuff before paint was even thought of," Anthony explained.

Another G&A employee, Jeff Martin, started helping him and they worked on painting the car. First Anthony painted the underside and rebuilt the suspension. The remaining exterior sheetmetal and bodywork was completed at Anthony's mom's house, which took another two-plus years (into 2002). 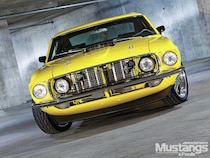 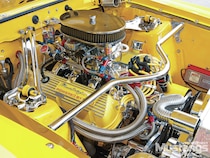 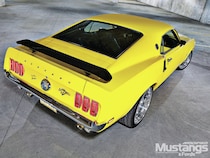 "I asked for paint for a Christmas present," Anthony joked. When the car was ready to be painted, it went back to G&A where Mike did the majority of the spray work, while Anthony and Jeff helped prep and assemble the car. They worked Friday evening through Sunday afternoon so as to not be in the way of G&A's regular working hours. Anthony's friend, Mark Spiro, runs Futureline Auto Tops, a nearby trim shop, and he gave Tony ideas for interior upgrades and made custom floor mats for the SportsRoof. He also showed Anthony how to make trunk boards to enclose the trunk area.

It took another six months to reassemble the car and then Anthony went to his first show in the spring of 2003. Anthony still goes to that show to this day.

"Every year, someone brings a new build to the show and it gets mobbed by people. That year it was us who were mobbed by people," Anthony said. He drove the SportsRoof like this into the winter of 2005, when he went to his first indoor car show.

"After seeing all the really cool cars at the indoor show, it made me think, 'I need to get my stuff together.' I called Jeff and said, 'We're tearing the car apart,'" Anthony says about how the second build came to be. By then, Anthony had his own shop tied to his business and started tearing the Mustang down again, smoothing the bottom of the car so Jeff could paint it to look as nice as the top side.

Anthony ripped out every interior panel and sent them to Mark at Futureline for custom suede and leather trimming. Having more mechanical knowledge under his belt by this time, Anthony upgraded the engine, added a NOS nitrous system, and even upgraded the suspension (which was sent out to be chrome plated). Kurt Mezger of Vintage Performance specializes in VWs, but Anthony tells us he is one of the best TIG welders he has ever met.

Since then, Anthony has shown the SportsRoof on the ISCA show circuit for two years, plus lots of outdoor shows, and has a room full of awards and a great many friends because of the build. Rick Schafer, Anthony's sounding board for ideas, has been in the hobby for decades and was a big help with the build.

"I'd ask Rick how to make my brake lines look better or what to do with some wiring, and he always had a winning idea," Anthony said of his friend. Lynn at K&G Speed helped with special ordering parts, fittings, hoses, and so on, while Bob Steelman helped him with cleaning, driving duties, and more.

"Bob has just always been there to help out, having a lot of fun with the car," Anthony says. The funny thing is that Anthony is not really a polish and shine guy, and has grown into more of a technical/fab guy. Good thing he has Pamela, his girlfriend, with him at shows, as she is very detail oriented and she loves to take care of those details at the shows that keep the SportsRoof looking its best.

"I never thought we'd be where we are now with all the awards, being in a car magazine, and so on. We're just a bunch of car guys having fun in the garage, but I couldn't have done it without the moral support, either of my family or long-time friends like Tom and Caveman," Anthony exclaimed.

Anthony has certainly enjoyed the car, but when we asked him what was next for the Chrome Yellow Mustang, we weren't surprised in the least when he suggested a third build might be in the future. Yes, even though he's happy with the car, he's considering changing the nitrous for a turbo and possibly a repaint. Whatever the end result will be of the third build, we know it's been a long time coming.