Conceived For Show, Built For Speed 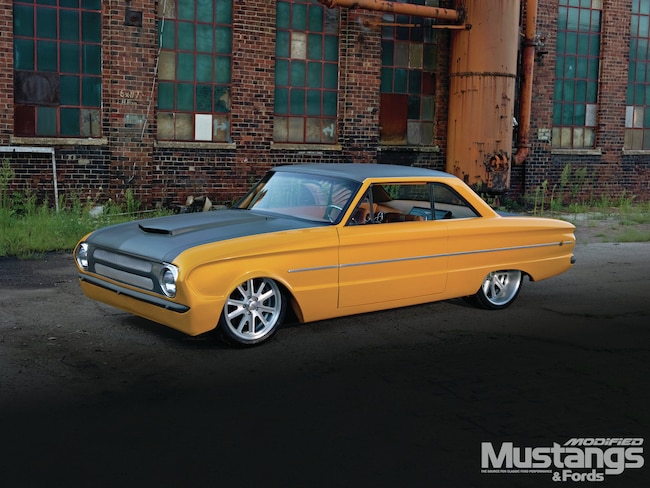 It’s said that the Peregrine Falcon is the fastest animal on earth, with diving speeds clocked at more than 200 mph. While the Ford Falcon was never designed to move at that sort of speed, Ryan and Dick Thomas’s ’63-1/2 Falcon Sprint certainly looks like it could.

The story of this Ford Falcon starts with its previous owner who dropped it off at Strange Motion Rod and Custom Construction in Cambridge, Illinois, for a full-tilt custom show-car build.

“Build it as you would yourself,” was the requirement given to Strange Motion owner Tim Strange. With free reign, Tim turned to a number of architecture magazines that he often perused, and combined the modern industrial look that he saw on those pages with various elements of ’60s IMSA racing technology and design trends.

“I’ve built lots of chassis with twin top and bottom rails and wanted to try the triple rail,” recalls Tim. “I can’t imagine all of the hours I have in cutting and notching the tubing.” What the Falcon ended up with is a chassis with a tubular truss design that incorporates an independent front suspension with a custom triangulated four-link at the rear. The original floor was cut out to fit over the new frame, and a new one was constructed from sheetmetal and steel tubing.

Atop the newly installed floor is a custom interior that starts with a modified factory dashboard. The original gauge location was filled in and the instrumentation now resides at the center near the bottom, providing an unobstructed view of the road ahead. Tim forged ahead with the build, fabricating a one-off center console, back seat delete, and wheeltubs to house the sizeable rear rollers.

“After fabricating the sheetmetal headliner, I realized why no one else had done that,” quips Tim. The result, however, is pretty cool with its Allen-headed fasteners, which, by the way, are used throughout the vehicle.

Beneath the Sprint, you’ll find a custom fabricated saddlebag gas tank that allows the exhaust pipes to run between it for a center exit, and a Dutchman Quick Change rear axle is definitely not stock either.

“I love to build hot rods and street rods, and to me, it’s not a hot rod if it doesn’t have a quick change rear,” says Tim. “It looks a whole lot better, when you look under a car, than seeing a typical 9-inch.”

Under the hood, Tim went modern once again by shoehorning a ’99 Cobra DOHC 4.6L engine, along with an ATI ProCharger supercharger. “I thought mod motors were cool looking and heard about how easy it was to get power out of them with a blower,” says Tim. “With all of the work done to the body and chassis, it didn’t seem like a 289 would do it justice.” Behind the cammer powerplant went a Bowler Transmissions 4R70W four-speed automatic transmission and torque converter.

Tim was just in the final stages of mock up and had laid the first color coat on when the owner called to inform him that he wouldn’t be able to complete the build as his resources had been depleted. Not the call that any shop owner wants to hear. “We took it to the SEMA show in 2006, and it sat for two years after that before Ryan took it over,” recalls Tim.

Said Ryan is Ryan Thomas, a scrapyard operator from Delano, Minnesota. Ryan and his father, Dick, who also works at the same yard as a shear operator, know a thing or two about dismantling junk, but they know about restoring old iron as well. Ryan and his father had worked on a few big car projects together previously, including a ’35 Ford Roadster built by Dave Tucci at Tucci Hotrods.

Ryan happened to be helping Dave Tucci at the Detroit Autorama when Dave introduced Ryan to Tim Strange. Tim carried with him a build book of a previous project, and also had pictures of the half-finished Falcon. Ryan went back to his father and the duo pondered it for two months or so.

"The Sprint was mocked up, but there wasn't any wiring and it obviously wasn't running," says Ryan. "It needed a wiring harness, computer, and updates to the transmission at the bare minimum. We brought the Falcon home and I started working on the intercooler plumbing and some other things. We thought about flipping the car," recalls Ryan. "Me and my dad fell in love with the car, though, and it became a passion." It probably helped that Dick Thomas is also a died-in-the-wool Ford guy. Once Ryan did what he could at home, the Falcon moved back to Tim's shop.

Though the Falcon was originally destined for the indoor show circuit, those types of events aren't really Ryan and his father's thing, so as ridiculously detailed as the car would be, it would be a driver, too. "We blew it apart and made some changes that Ryan wanted to do," says Tim. "We smoothed out all of the chassis welds, and Ryan did all of the wiring." A wiring harness from the Detail Zone gave power to the Falcon, and Kicker donated a host of audio equipment.

Once Ryan completed his work, Tim's wife, Carrie Strange, picked out the interior colors, dropped in the rug and stitched up the seat covers. On the exterior, Tim sprayed the Dupont Hot Hues Amber Ecstasy and Charcoal Gray paint. Subtle body mods abound, and you can read about the complete list in the details section.

As cool as the modern industrial theme is with this Falcon, it's the details that really separate it from others. Tim still rides BMX bikes, and used some handlebar stems for various components including the gas tank mounts. The BMX theme continues in the interior, where Tim fabricated the brake pedal out of a pair of TNT Bicycles caged aluminum pedals. For the body side molding, the factory trim was removed and in its place is an aluminum half oval that Tim sourced from a prosthetic limb manufacturer. Tim also hates intake manifolds such as the stock DOHC Cobra pieces that have the inlets on one side, so he fabricated a new intake manifold along with some fuel rail covers.

From the time Ryan dropped the car off right after Christmas, until the Detroit Autorama the following March, Ryan made the road trip from Minnesota to Illinois every weekend for those two and a half months. The following summer, a bad tune-up in the ECM cooked the mod motor, but Ford Racing Performance Parts stepped in to help Ryan out with a new Aluminator engine, and Dynospeed helped Ryan with the SCT tuning to get it right.

"It was a pleasure working with Tim, and I look forward to building another ride with him," says Ryan. "We've become good friends." Ryan told us that he and his father plan to drive the Falcon all over this summer to a number of events. The Falcon has the pedigree, now it just needs the experience.