This Best of Both Worlds F-100 Is A Great Classic Custom, A Rocket on the Road, and A Sterophile’s Dream!

It’s hard to say why we choose to bring certain vehicles into our lives, showering them with money, time, and attention until they finally match the image in our minds. Many vehicles are chosen based on fleeting impressions that stand the test of time. Recalling events from the long distant past, we think about the family cars we grew up with, those cars we longed for as teenagers in high school, or even exotic transportation we’ve seen in the movies. Years later, when time and fortune allows, it’s natural to make some of those dreams come true.

Frank Meininger’s dream began many years ago when he was in the Air Force, stationed in Germany. Thoroughly unexpected, the bright red F-100 rolling by was quick, loud, and an American classic, tooling along, a long way from home. It took just a moment, but the impression was a lasting one. Now retired from the Air Force and working as a financial advisor in Orange Park, Florida, Frank came across a truck similar to the one he’d seen in Germany almost two decades before. The old F-100 already had a few additions like a 460 big-block, stroked to 514 ci. It ran, but the steering and brakes needed lots of attention and rust had taken its toll on much of the body. Frank brought the truck home and began a 3-1/2-year makeover.

With all the power that the big 514 V-8 could produce, one of the first steps was strengthening the rearend. A new, narrowed Ford 9-inch rear with a Detroit Locker and nodular pumpkin was locked in place with a triangulated three-link, a Panhard bar, and QA1 coilovers. Major changes occurred to the original Ford solid front axle, thanks to Rick Smith of JR’s Muffler and Welding in Jacksonville. He fabricated new shock towers using SVO Mustang perches to hold the UPR caster and camber plates along with adjustable Tokico coilovers. Rack-and-pinion power steering ensured rapid response in the turns and Power Stop disc brakes guaranteed safe stops, thanks to their cross-drilled and slotted rotors, 11 inches up front and 10.25-inch versions in the rear. Ford SVO calipers provide the grip. Frank added hydraulic assist to the brakes with a Hydroboost system from a Ford van.

The 460 engine in the truck had been bored to 514 ci and was upgraded with an Eagle crank and rods, along with Mahle Motorsports pistons. An Iskenderian cam activates 2.190 intake and 1.760 exhaust valves in the Edelbrock aluminum cylinder heads. The engine was originally equipped with a single four-barrel carburetor, but a friend made Frank an offer he couldn’t refuse. The dual-quad Holley 750s and the 8-71 BDS blower now pressurize the air/fuel mix with a conservative 5 pounds of boost. A Mallory Unilite ignition explodes the mix and Sanderson 1.75-inch headers scavenge spent gases using a 2.5-inch exhaust system and a 3-inch X-pipe. Dynomax mufflers tame the beast down to a mellow roar, but electric cutouts send open exhaust through the side tips for some NASCAR-level motor music.

The truck uses a C6 automatic with a TCI kit and B&M shifter to transmit power to the Ford 9-inch rear equipped with 3.50 gears. The package produces 500 rwhp and 520 lb-ft of torque, with the potential for considerably more should Frank bump up the boost at the track. Twin Zirgo 4,000-cfm fans keep temps in the green and the new Painless wiring harness simplifies all the new additions.

Much of the front of the truck was rusted and Frank felt that the best solution was to use a fiberglass tilt front end, purchased from US Body Source in Gainesville, Florida. At the same time, he also purchased new running boards and rear fenders. It took a little work, but the 20-inch-diameter Centerline polished aluminum rims, with their huge offset and 18-inch wide rear Mickey Thompson tires, fit perfectly. The front uses 20-inch Centerline rims with 9.5-inch Nittos. Additional body mods include shaved door handles, eliminated tailgate latches, and a tonneau cover from Gaylord’s to cover the bed. Frank did his own paint and bodywork, and with the help of his good friend Michael Spiwak, they painted each panel separately using Sherwin-Williams Brilliant Black Crystal, just a minor deviation from the image of that long-lost red F-100 in Germany.

Moving inside, the cab was stripped and all the metal surfaces inside were painted to match the exterior. More than 100 feet of Dynamat was applied to every inch of the interior and another 40 feet was used in the bed. Once the cab was library quiet, the gray tweed and black upholstery was done by Frank and his good friend, Jack Nichols. An SVO steering wheel keeps Frank in close touch, while VDO gauges display the vital signs. A separate Auto Meter boost gauge monitors the blower.

But there’s more. In addition to the high-performance engine, this truck has an equally high-performance stereo system, another of Franks’ favorite hobbies. It begins with the in-dash Jensen 9512 head unit, featuring a 7-inch LCD touchscreen monitor that incorporates DVD, CD, and MP3 players, an SD card slot, and an iPod connection. It controls both amps in the truck beginning with the five-channel Kicker ZX700.5 amp mounted on the rear cab wall. It sends 70 watts across four channels (4 Ohms) to the 6-inch Infinity component set in the kick panels, along with separate tweeters in the dash. Rear fill is provided with a second set of 5.25-inch components in the rear quarter-panels. The amp has a Class D fifth channel for the pair of 10-inch Kicker subs positioned on either side of the amp. It’s a great sounding system, but there’s more.

The bed of the F-100 causes the most surprises among stereophiles. The huge, heavy-duty sub enclosure, designed by Bob Manis, uses a 2x4 frame, strengthened laterally with 4x4s to handle the power of the four 15-inch Kicker L5 subs, two on each end. They are energized by an eargasmic 2,500-watt Kicker ZX2500.1 Monoblock Class D amp mounted on the bed wall. The combination is loud by any measurement, but the extra bass can be switched on and off from the driver seat. In addition to providing booming bass, the big box also adds traction where it’s needed most, thanks to its 400-pound weight positioned directly over the rear wheels.

While the truck may never be finished, for now, at least, it’s complete. The vintage Ford is a joy on the street and runs smoothly enough to be a daily driver. Future plans under consideration include a large screen TV mounted underneath the tonneau cover, adding even more fun to outdoor concerts at cruise ins.

The package produces 500 rwhp and 520 lb-ft of torque, with the potential for considerably more should Frank bump up the boost at the track 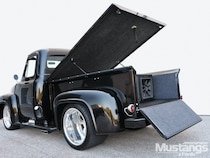