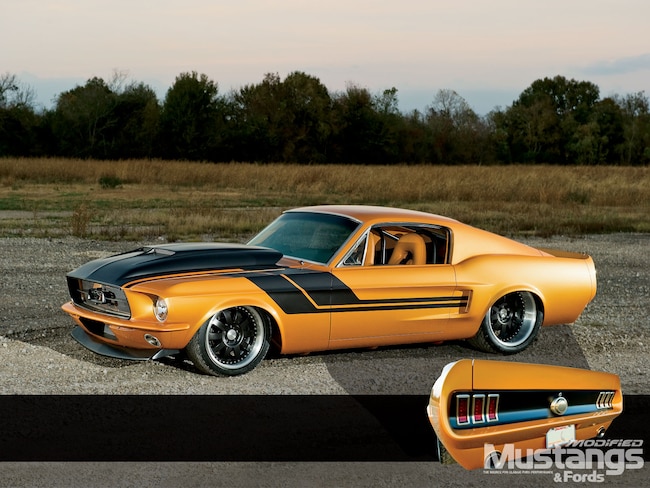 The Ridler Award is a long-standing merit badge in the street rod community that signals the finest achievements in creativity and craftsmanship, so it stands to reason that a shop that specializes in building vehicles that compete for the Ridler would pull off one unique Mustang, and it did just that.

As you might imagine, there was no easy path to the finished filly that you see before you, and it all starts with Lafayette, Louisiana's Joe Brown, who actually began his relationship with Ford's ponycar years ago behind the wheel of the much-unloved Mustang II. Ironically, it was gold in color as well, as Joe recalls, but he eventually found himself entrenched in the 5.0L Mustang movement of the early and mid '90s, and owned a few Fox bodies while employed as a Ford dealer transmission technician.

"At the time, my hotrod was my daily driver," notes Joe. "Working at the dealership definitely helped, as we could get discounts on Ford Racing parts and help with warranty claims." As with most 5.0L enthusiasts of the time, Joe found himself at the dragstrip a lot, often beating on the less-than-peppy cars from Detroit. After a while, beating on the cars and breaking them led him down a different path.

Joe eventually left dealership life to strike out on his own with a transmission rebuilding enterprise, and during this time, he started to get into the show cars.

"I got into the ISCA indoor car show circuit," says Joe, "and that led us into the hotrod shop. Hot Rod Joe's Rod and Customs of Lafayette, Louisiana, was born and currently operates out of a non-descript building in rural Louisiana, yet turns out some impeccable street machines.

"A lot of local people don't even know that we build cars here because most of them are from out of state. We've built several cars to compete for the Ridler Award, but we do all sorts of street machines, and do a lot with the modernization of old cars."

Joe's '67 was originally a customer's car, that he had picked up at a swap meet at Texas Motor Speedway. Unfortunately for the new owner, the project hardly got off the ground before his better half caught wind of the unapproved purchase, and he ended up needing to sell it in a hurry. Joe knew the '67-'68 fastbacks were hot, and offered to take it off his hands.

The Mustang sat dormant for more than a year before Joe started to occasionally tinker with it. Joe and his crew worked really hard on some customer show car builds, and realizing they were killing themselves to get the jobs done, Joe made the call to scale back the work pace, not push so hard, and start something of his own.

"After 5 o'clock, we work on our cars," states Joe. "It puts a little more fun back in it when you can work on your own cars."

That work ethic provided a bit more time to devote to the fastback, and said time was put into installing a custom full-length chassis from Scott's Hotrods and Customs in Oxnard, California. This provided an independent front suspension, as well as a triangulated four-bar rear suspension, and a rigid connection between the two. QA1 shocks at all four corners keep the coil springs in check. Joe tells us that the undercarriage is just as nice as the rest of the car, and we're more than inclined to believe him.

Attached to the chassis are Wilwood six-piston calipers and 13-inch rotors at the front, and Wilwood four-piston calipers with 13-inch rotors out back. Where the frontend rolls on custom-designed 18x8-inch Intro wheels with Mickey Thompson 26x10x18 Sportsman SR radials, the Ford 9-inch out back, packed with Strange Engineering 3.50 gears and a Traction-Lok differential, rolls on mammoth 20x12 hoops with 29x15x20 M/T rubber.

From the time the project was started, the plan was to drop in a newer powerplant, and in this case, it's a supercharged 4.6L, four-valve crate engine-the same one used in the late-model '03-'04 Mustang Cobras. Out of the crate, the modular mill sported the factory Eaton huffer, and the one-off fiberglass hood, of which Joe estimates he has some 10,000 man hours in creating, was built to fit it. When Joe decided to mount a Kenne Bell 2.8 blower on it, the crew had to get creative with the idle air control valve to make it fit. An SCT mass airflow meter and 60-lb/hr fuel injectors were also fitted to the modular mill to complement the 21 psi of boost. After Tuners Inc's Tony Gonyon finished reworking the ECM, the fastback produced a stout 530 rwhp.

Astute readers will note that the 530 rwhp comes up a bit shy of the claimed 720 flywheel horsepower on the cam covers, however the long dyno pulls coming from the 3.50 gears, 29-inch-tall tires, and 21 pounds of boost at 6,800 rpm sent the air charge temps through the roof. Joe plans to swap out the cogs for a steeper set to remedy this. Still, the current 600 or so horsepower at the flywheel is a lot of grunt for this 3,200-pound colt, not to mention the Kenne Bell makes boatloads of torque way down low in the rpm range.

With the body and chassis heavily modified, the headers were also hand-fabricated in-house, and feature 15/8-inch primary tubes and 21/2-inch collectors. Joe tells us that the transmission tunnel is a custom-made piece that allows the T-56 transmission to sit higher up in the chassis, and this allowed him to run the exhaust under the transmission and yet hidden from plain view. The 21/2-inch pipes transition into SLP stainless steel mufflers and exit out double-walled, stainless tips.

As you can tell, considerable effort has been put into customizing the interior space. Starting with a CDC Flashback dashpad, the rest of the interior pieces are handformed in fiberglass or aluminum. The seats are originally from another make, but Steve Holcomb at Pro Auto Custom Interiors (Knoxville, Ten-nessee) reformed them and covered them in butterscotch and charcoal leather. He also whipped up a set of leather door inserts for the door panels that Joe had made. Nearly all of the interior panels, including the rear seat area, are upholstered in the matching leather. Behind the Budnik steering wheel, you'll find a custom dash cluster from Classic Instruments, and an Alpine touchscreen head unit with navigation controls, and a bevy of high-end audio equipment. Joe even customized the MGW shifter, and all of the bright work and trim panels are all one-off pieces that he designed.

As stunning as the exterior of this fastback is, there wasn't a lot of lengthy planning involved.

"We're more of a seat of the pants shop, rather than going off a rendering," says Joe. "There's no exact path. We just wanted to keep it true to a Mustang, but modernize it, make it functional and usable. Less conspicuous are the shaved door handles and vents, stretched rear wheelwells, and sectioned quarters. The front bumper, valance, and rear bumper/fascia are all hand-fabricated pieces, while the front chin spoiler is a factory piece. The fastback is also devoid of any chrome, with many of the trim pieces featuring a brushed nickel appearance.

"We didn't know what color it was going to be until about a week before paint," recalls Joe. That lustrous hue is called Butterscotch Pearl and hails from the Dupont color charts. The contrasting color that adorns the custom hood and flanks the sides is a Charcoal Metallic from BASF with a satin flattening agent.

Most of the cars that come out of Joe's shop are destined for the show circuit, and they're usually built to compete in a certain class. This one was built toward the Pro-Touring arena, and has hit a few shows already, but we've heard firsthand accounts of how nice it is to drive. Joe says he has about 40 miles on the car since finishing it, and we suspect he'll log a few more since he already has another modern street rod project in his sights.