What If Ford Produced A High-Performance Truck In The Late '60s? 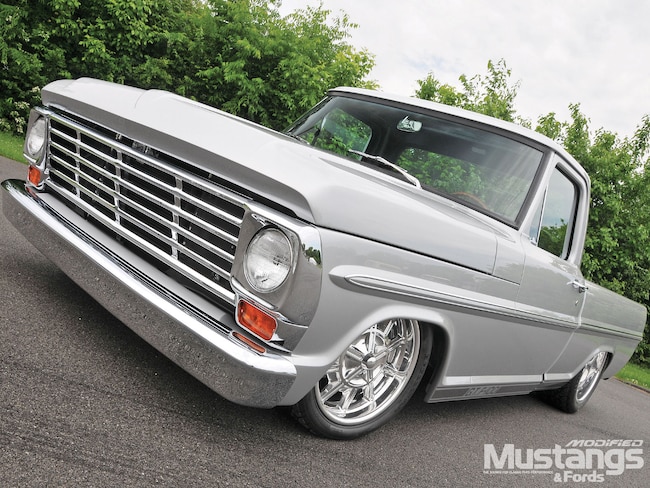 This beautiful '68 F-100 is the first truck that Kirk Johnson has ever owned and he's had it 31 years! It got him through high school and he admits he drove the wheels off of it. When the engine finally blew up, the truck languished in the garage, unused-but not forgotten. While some things might be too good to part with, that doesn't mean they can't be improved. The rejuvenation process began in earnest six years ago when Kirk, of Sacramento, California, decided between two alternatives. He's always been an avid Mustang fan and was planning to build a custom version, but he realized he could create a genuinely unique F-100 by incorporating Mustang elements into his favorite old truck. About that time, Kirk met Ben York at Roseville Rod and Customs and between them, a theme developed. "What would it look like if Ford produced a high-performance truck in the late '60s?"

With that as their guide, they began upgrading the classic F-100. Because of the new, big-inch engine scheduled for the Ford, chassis modifications were among the first priorities. Since aftermarket suppliers didn't have a front suspension for this model, the team adapted a double A-arm setup from a '59 Chevy. QA1 coilover shocks and a TCI power rack-and-pinion steering setup completed the frontend. The framerails were boxed and the rear Z'd to make room for the four-link holding the 9-inch rear. A Panhard bar stabilizes the setup along with a second pair of QA1 shocks. Currie 31-spline axles transmit the power to the unique Pony GT wheels from Evod Industries. With a distinct Mustang GT350 look to them, the rims are 18x8 up front and 20x10 in the rear, wrapped in BFG 45-series rubber. Wilwood disc brakes on all four wheels provide modern stopping power.

Once the autocross-level suspension was in place, it was time to add some world-class propulsion. Kirk chose a 428 Cobra Jet, rejuvenated with a long list of modern performance parts. The 0.030-inch over FE block is equipped with ported and polished Edelbrock heads, 10:1 Ross pistons, and a Crower roller cam. The 1050 Holley sits on an Edelbrock intake providing a Big Gulp's worth of the air/fuel mix for the MSD ignition to explode. Sanderson block-hugger headers scavenge spent gases, routing them through 3-inch stainless steel tubing and two 36-inch-long stainless steel specialty mufflers. The combination produces one of the most unique sounding vehicles we've heard in a long time. Rick at Crackaway Engine Machine in Elk Grove, California, handled the build of the 640hp/690-torque powerhouse.

Turning its attention to the body, the team began a long list of subtle mods, beginning with several you might not even notice. For example, the rear cab wall was leaned forward about 10-degrees to bring it in line with the doors. The front fenders were narrowed slightly to blend with the hood, and then a narrowed '67 grille was fitted to the new smaller opening. The seams across the front of the hood were welded shut and a peak was added. The front bumper is actually a blend of three bumpers, necessary to eliminate the license plate opening. All the seams on the cab were filled and subtle extensions were added to the bottoms of the doors to hide the previously exposed rocker panels. The smoothed bed benefits from new angled side walls, complete with access doors for the dual batteries, fuel pump, and cut-off switch. A forward-mounted fuel cell holds 18 gallons. In order to accommodate all the suspension modifications, the maple bed floor was raised 4 inches.

The interior received its share of Mustang-related additions beginning with the Moto-Lita steering wheel and matching wood grain dash that is actually hand painted aluminum. Auto Meter gauges keep track of the big 428 FE and the Lokar shifter in the new center console controls the C6 automatic. Kirk left the stock radio in place for a nostalgic look, but the center console holds the real Pioneer stereo. Infinity speakers in the kick panels and rear cab wall are powered by the Infinity amplifier, hidden behind the rear panel. Acura seats, re-upholstered in black leather by Dave Putnam Upholstery, provide both comfort and support. Prior to Roseville Rod & Customs spraying the final PPG Silverstone Metallic paint, custom side trim was fabricated from brass and then chromed. The completed "GT F-100" is an amazing combination of high style and equally high performance that makes it hard to beat on the show circuit. It also became the perfect way to resurrect Kirk's old first and favorite truck! 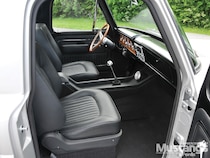 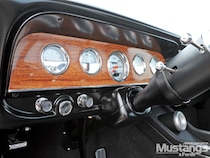 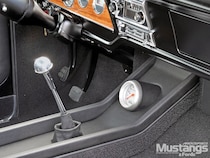 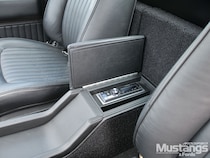 Don't miss out on this 1963 Ford F100 that has unique metalwork and a V-8 engine. Check out this truck from a grandfather and a Farm that has 650 horses.