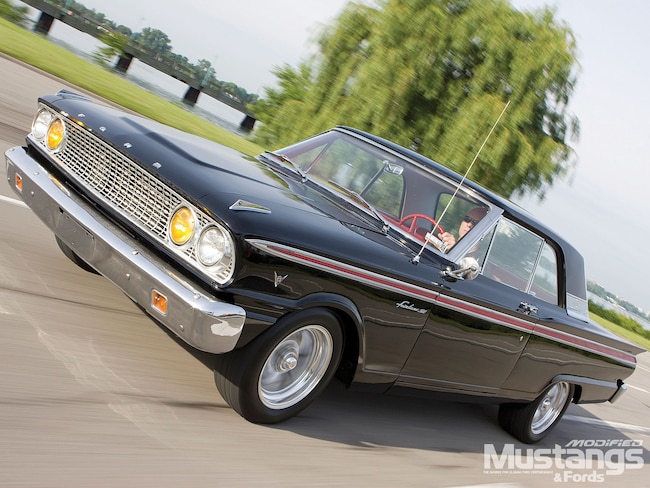 It was a long time ago, but William Considine remembers it vividly. While dating his future wife, Sue, he helped her find a '63 Fairlane sedan for her first car. He found the car in North Carolina and brought it home to Michigan. It was a three on the tree manual trans sedan, baby blue, and super clean. She drove that Fairlane everywhere, but eventually moved up to something newer and sold the car to her brother. He promptly began hot-rodding it, with the end result being a minor wreck and then selling the car shortly afterwards. Over the years, William's wife spoke fondly of the Fairlane and their early courtship memories. How hard would it be to find another one she thought? With that, William was on the hunt for a replacement.

He found the car you see here, a '63 Fairlane 500 Hardtop in mid-1993 in sad shape. He found it locally, but it had just been shipped up from Georgia. After dropping $1,200 in the owner's palm he headed home with it. The body was in decent overall shape, but the engine burned more oil than fuel and the fact he only had one front brake working for the drive home gave William a white knuckle ride back to his place for sure. Within a few weeks of placing the new Fairlane project on the side of his house he had a passerby stop and proclaim he had two Fairlanes "just like that one." Apparently they were project cars/parts cars that never got off the ground. William's Fairlane collection grew to three when he talked the gentleman into letting the Fairlanes go. Using these two parts cars he was able to net all of the parts he needed to buildup his Fairlane.

There was a lot of ground to cover on the Fairlane project, including a color change (the '63 was an ugly shade of brown with a white painted top), drivetrain swap, wiring, suspension, and more. As the car came from Georgia, the underside was covered in that famous red Georgia clay. His daughter Lucy was a trooper, helping Dad scrape away all those years of driving on Georgia clay roads, getting covered from head to toe in it during the process (Mom wasn't too happy however).

With the car cleaned up it was time for another family member, William's cousin Junior, to lend a hand with the bodywork and blocking the car out for paint. Once the pair was happy with the results, William brought the car to Al's Collision in Warren, Michigan, for the application of Jet Black polyurethane and several coats of clear. William and friend Tom Hannon spent several nights wet sanding and buffing the paint out to the mirror finish you see on these pages.

With the paint- and bodywork complete, it was time to move forward with the Fairlane's motivation, which was found in the form of a '90 Mustang 5.0L donor engine. His friend Harry Brown helped tear the engine down, port a set of Trick Flow Twisted Wedge aluminum heads, and top it all off with a used Vortech blower kit and some complementary induction pieces. Liddio Iacobelli's Alternative Auto tuned the whole package and burned a custom chip for the 5.0L 'Lane to purr like a kitten. Backing the blown small-block is Tremec five-speed, while the stock 8-inch rear was beefed up for the newfound power headed aft. Rounding out the project, William returned the stock interior back to the car, upgraded the suspension with a few basics, and bolted on a set of staggered fitment Torque Thrust IIs for the perfect stance. As William tells us "none of this would have been possible without all the help of my family and friends." We can surely relate to those family ties William.

William retired in June 2007 after 26 years in the Air Force as Crew Chief of a KC-135 Stratotanker refueling aircraft. With the help of his friends, Gerry Ridner and Bill Fields, William was able to design an image and submit it to the Air Force's nose art program, which allows pilots to have approved nose art applied to their aircraft. William, being from Michigan (as well as being stationed there) submitted artwork reflecting the famous Detroit, Michigan Woodward Avenue cruise. The artwork includes some famous Woodward landmarks as well as William's own '63 Fairlane. The artwork was applied to his KC-135 and it flew with him everywhere for more than 12 years! Now, how cool of a conversation starter would that have been with the ground crew? 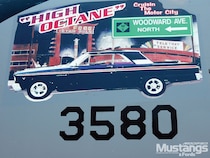 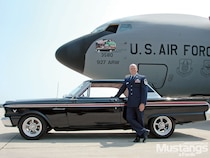 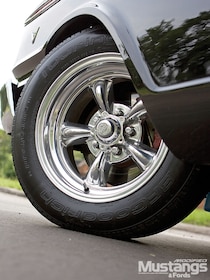